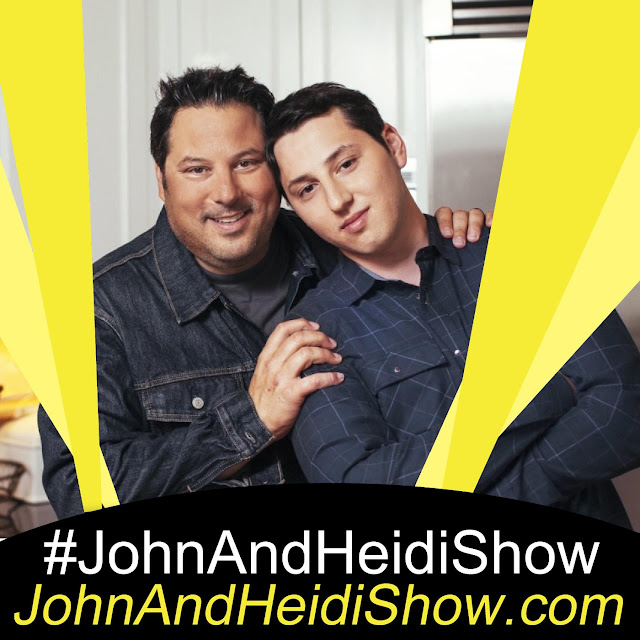 Today we visit with Greg Grunberg (Star Trek, Star Wars, Heroes and many more) today we visit about a project that is near and dear to him. It's called The Care Giver Series. His son Jake has epilepsy. He talks to other care givers and shines the spotlight on some pretty amazing people! http://TheCareGiverSeries.com/

National Be a Millionaire Day

Almost half of us have been left red-faced on a date, with forgetting the other person’s name, spilling a drink and bumping into an ex among the most cringe-worthy moments.

A poll of adults found 42 per cent even feel the disasters will always haunt them throughout their lives.

But the research, commissioned by Extra Chewing Gum, found 44 per cent preferred to laugh off any embarrassing moments.

And while three quarters felt it wasn’t funny at the time, they admitted they can look back and have a good laugh about it now.

Scientists say chili peppers could be the secret ingredient for beating all forms of cancer. Researchers at Marshall University say capsaicin — the substance which gives chili peppers their hot and spicy taste — can also keep multiple forms of cancer from growing. The biggest hurdle scientists have to overcome, however, is finding the best way of delivering capsaicin to patients.

Andy Dick is in custody after the trailer he’s been living in was surrounded by cops, who placed him in handcuffs and hauled him away — and the whole thing was broadcast live. Reportedly, Dick was arrested for felony sexual battery after an adult male claimed the comedian sexually assaulted him at the RV park. The arrest was broadcast on Captain Content’s RV live stream Wednesday. Dick and a group of live streamers have apparently been living at the site in for some time.

Some onlookers in the courtroom during the Johnny Depp/Amber Heard trial have gone to great lengths for a front-row seat. Fans told People magazine they camped out in cars outside the Fairfax, Virginia, courthouse and other spent big on travel expenses to wait to get in. Eager enthusiasts revealed they arrive in the wee hours of the morning to secure wristbands that grant access to the courtroom each day to watch testimony. One woman said she crossed the ocean to see the trial, coming over from England. During breaks, she heads to LA at a cost of $600-700 each way, then comes back when it resumes. Including hotel and food, she says her expenses have been about $10,000 so far. But 59-year-old Ivan De Boer has her beat. He used a year’s worth of paid vacation to travel to the trial, spending $30,000 on expenses so far.

Sure, he’s busy with his Twitter purchase and receiving death threats from Russia and stuff these days, but you might recall that Elon Musk unveiled Neuralink in 2016, a startup developing a wireless chip that could allow humans to control a computer with their mind. He described it as a ‘Fitbit in your skull’. While a demonstration showed a monkey with the implanted chip playing Pong with its brain, there must be a practical use for this, right? In a recent interview, Musk said Neuralink has the potential to help people with Parkinson’s, brain injuries, spinal injuries, morbid obesity and other health conditions. And when a Twitter user asked if there is hope of curing tinnitus, Musk replied: “Definitely. Might be less than 5 years away…” By the way, the chip also makes it possible for users to stream music directly into their brain.

In news about products that you weren’t aware still existed, Apple has announced it will be discontinuing the iPod Touch, the only remaining model of the portable MP3 players that changed the way people consumed music after being introduced in 2001. The original 6.5-ounce iPod was capable of storing 1,000 songs and had an advertised battery life of 10 hours. That was followed by the 3.6-ounce iPod Mini in 2004, the iPod Shuffle and the iPod Nano in 2005 and the iPod Touch in 2007.

There was no punctuation until the 15th century.

In the last 4,000 years, no new animals have been domesticated.

The tiger’s skin is striped, just like its fur.

To help speed up the solving-time for Rubik’s Cubes, lubricants can be used to grease the joints. These include “Cubicle Lubicle”, “Cosmic Lube” and “Lubix Cube”.

Sunlight can trigger a cold-sore breakout.

Question: 55% of people say they always keep one of THESE in their vehicle. What is it?

Answer: A roll of toilet paper

A Virginia couple who couldn’t decide whose last name to take after getting married left the momentous decision up to fate — and the flip of a coin. Collin Hansen proposed to Pearl Lee in November, but both realized that they would each be the final member of their families to carry on their last name. The pair hadn’t reached a decision by the time they were set to walk down the aisle on March 26, so they opted to have their officiant flip a coin at the end of their nuptials to decide their fate. A wedding guest at the Lee-Hansen wedding shared a video on TikTok showing the moment the coin was tossed and the couple was formally introduced — as Mr. and Mrs. Hansen. It quickly went viral, garnering over 1.8 million views. LINK: https://tinyurl.com/mr5jsf89

1. Turn the heating down

2. Making sure lights are always turned off

3. Buy own brand products at the supermarket

5. Turn off all electrics when not using/out of the home

6. Wear a jumper instead of turning on the heating

7. Save leftovers for another meal

9. Use a clothesline instead of a tumble dryer

10. Collect coupons and money off vouchers

15. Wait for the sales when making purchases

16. Buy food and toiletries in bulk

17. Turning off all the plugs before leaving the house

20. Borrow books from your library

22. Using public transport instead of taxis

25. Go to supermarkets in the evening for yellow sticker deals

26. Grow your own vegetables and herbs

27. Drink water when eating in restaurants

28. Using an older or hand-me-down phone rather than buying the newest model

29. Reduce your television/internet packages to the bare minimum

30. Selling anything you possibly can on an online marketplace

"I have a lot of growing up to do. I realized that the other day inside my fort."

Good Samaritans Save Woman's Life After She Lost Consciousness At The Wheel
https://www.sunnyskyz.com/good-news/