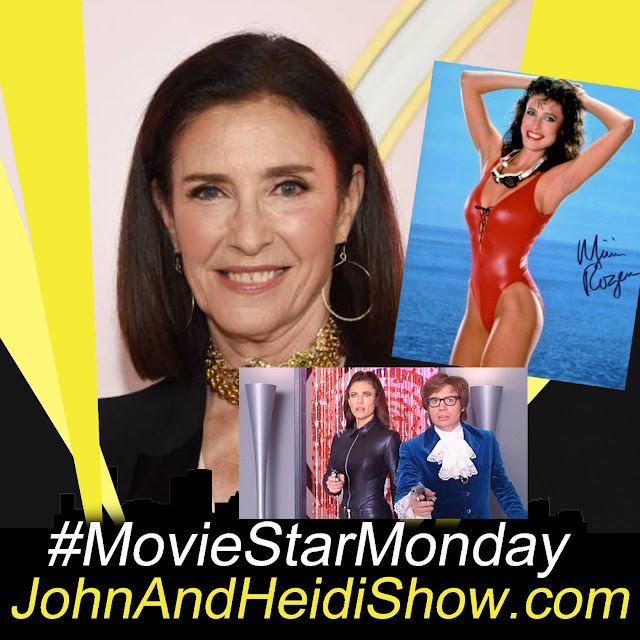 This #MovieStarMonday we visit with Mimi Rogers (Hider in the House, The Doors, Austin Powers: International Man of Mystery) It's fair to say that after 20 years and over 50 film appearances, Mimi Rogers should be praised for her variety of roles and acting capabilities, not just the fact that she was once married to Tom Cruise.

We'll talk about her latest project Bosch: Legacy. This series premiered on Friday, May 6, on Amazon Freevee, with two new episodes every Friday through May 27. That will give the show a 10 episode debut season.

National Do Something Good for Your Neighbor Day

Those feeling anxious about their 2022 finances also named the top factor contributing to their financial anxiety, with inflation (32%), job and career concerns (16%), COVID-19 (14%), medical/health expenses (10%), and debt (10%) leading the pack. The list of choices also included stock market fluctuation (5%), retirement (5%), taxes (5%), and childcare or tuition expenses (4%).

Many people 55 and over who expressed concerns over their 2022 finances were concerned with inflation, with 37% reporting it as their top concern. Younger adults, aged 18-34, reported job and career concerns as the number one factor contributing to their financial anxiety (24%).

⦁ Social media may be contributing to financial anxiety — only 54% of people not on social media said they were anxious about their finances in 2022, well below the national average of 64%.

⦁ Anxiety levels were especially high among parents of children under 18, with 72% reporting financial anxiety, in contrast with 61% of non-parents. The pandemic was top of mind for many parents, with 19% of those anxious about their 2022 finances naming COVID-19 as their number-one reason for financial stress.

⦁ Women were also more anxious about their finances than men (69% vs 60%).

Netflix won’t be airing the most talked-about moment from its first-ever comedy festival. Dave Chappelle was performing at the Hollywood Bowl during his set at the “Netflix Is A Joke” Festival last Tuesday when 23-year-old Isaiah Lee ran up and tackled him to the floor. But the decision not to show the incident isn’t due to the assault. The Hollywood Reporter says Netflix “made it clear before the festival that the comedian’s 4 sold-out Hollywood Bowl shows were not being taped for a special.” Chappelle had his own crew present to record the show, as comedians often do when working out new material, so footage of the attack likely exists, and could be released by Chappelle some time in the future.

Ken Jennings has shared some news about the remainder of the current “Jeopardy!” season. On Twitter, he announced that he’ll again take a step back from hosting, and he’s “handing the keys” back to Mayim Bialik, who will be hosting the quiz show for the next “few months.” The former Jeopardy champion thanked everyone for watching and noted that he’ll return to the show “before the end of the season.” Bialik returned to the Jeopardy! Helm starting with Monday’s episode.

Feeling stressed out at work may become more frequent in middle-age or our senior years, research shows. Workplace practices that can negatively affect job satisfaction among employees young and old were found to be even more detrimental on the stress levels of older workers, according to the Portland State University study. Study authors say their findings suggest that for older workers, having more freedom to choose how they do their work and feeling supported by their employers helps them deal with the psychological and physical changes of aging. While younger workers are more focused on learning skills and advancing careers, older workers are more interested in emotional needs. Older employees find more value at work through meaningful interactions with their colleagues and in mentoring roles with younger coworkers.

Millennials have been blamed for the death of a number of sacred cows but, according to Money, the houseplant industry isn't one of them — growing over 50% in the last few years by some estimates. Unable to afford a large home, millennial renters have doubled down on making their apartments as cosy as possible and houseplants have been the unlikely beneficiary, argues the report. Like any beloved product targeted at the digital generation, a number of online stores have sprung up to serve the growing demand.

Mice sing like birds, but humans can’t hear them.

A UK study found that the average adult spends more than twice as much time on the toilet than being physically active.

Peeing in the shower is good for the planet. Urine is sterile, so peeing while you wash saves water and reduces toilet paper usage.

Contrary to popular belief, no study has proven that eating chocolate causes acne.

Dolphins give names to each other.

Question: Almost 60% of people agree that you should not do this before 8a.m. What is it?

Your manager is more likely to be swayed if they have a warm beverage in hand while sitting in a comfy chair, according to research by Yale’s John Bargh and Tel Aviv University’s Thalma Lobel. Such pleasant stimuli takes advantage of an idea called “embodied cognition,” the notion that our physical environment can influence our perceptions and feelings. And when we’re in our comfort zones, we’re more inclined to be agreeable.

8 Miraculous Things Green Tea Can Do for Your Body

1. IT CAN BOOST YOUR MOOD

2. IT CAN HELP YOU LOSE WEIGHT

3. IT CAN HELP YOUR MEMORY

4. IT CAN LOWER YOUR BLOOD PRESSURE

5. IT CAN PROTECT YOUR HEART

6. IT CAN RELIEVE STRESS

7. IT CAN SETTLE YOUR STOMACH

8. IT MAY HELP PREVENT CANCER

“Two things are infinite: the universe and human stupidity. And I'm not sure about the universe.” - Albert Einstein