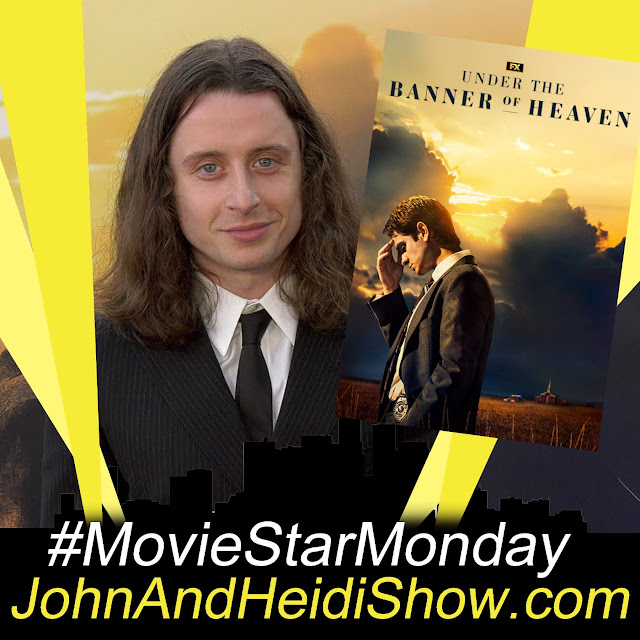 This #MovieStarMonday we visit with Rory Culkin (Scream 4, Lords of Chaos, Waco, etc) We will visit about his latest project. Under the Banner of Heaven …premiered on April 28th. It streams Thursdays on Hulu.

The new true-crime miniseries "Under the Banner of Heaven" is part of FX's lineup of original programs developed exclusively for Hulu.

"Under the Banner of Heaven" stars Oscar-nominee Andrew Garfield as Jeb Pyre, a detective in a small Mormon community in Utah. Jeb is confronted with solving the shocking double murder of a woman and her infant daughter. As the investigation unfolds, Jeb learns troubling details about a fundamentalist sect that could be linked to the crime.

Do you love the taste of sour candies? Then you might be an extrovert. At least that’s what a survey of 2,000 candy lovers is telling us. Conducted for Jelly Belly Candy Company, the survey by OnePoll digs deeply into the theory that a person’s preference for certain sweets says a lot about their personality. Besides being extroverted (59%), people who love sour candy also identified themselves as more “eccentric” (53%), “funny” (50%), and “sarcastic” (51%). Chocolate lovers tended to describe themselves as “optimistic” (76%) and “shy” (67%). Fans of mint were most likely to say they’re “thoughtful” (78%). Other results:

If you’ve ever starting downing a burrito or taco, just to have half of the insides fall out while you’re trying to eat it, then this is for you. A man has invented the “Burrito Bumper”, a food funnel for that catches your fallen fillings, and creates a secondary taco, all set for you to enjoy. In a video posted to Reddit, Matty Benedetto breaks it down, saying: “First, effortlessly insert a tortilla into the bottom basket and begin binging on your overstuffed burrito. As it ultimately falls apart, the overflow of ingredients will conveniently flow into the funnel and be swiftly inserted into your newly created taco below. Upon the last bite of your burrito, simply reach down and go to town on your freshly recycled taco creation.” LINK: https://tinyurl.com/cx4hm39t

Chris Rock wasn’t kidding when he said he won’t talk about “The Slap” until he gets paid. During a show at Royal Albert Hall in London on Thursday, Rock immediately addressed the elephant in the room – sort of. First, he remarked: “I’m OK, if anybody was wondering. I got most of my hearing back.” But anyone expecting Rock to go further than that will apparently have to wait for a comedy special. Quote: “People expect me to talk about the (crap), I’m not going to talk about it right now, I’ll get to it eventually, on Netflix.”

Producer Jerry Bruckheimer says it is unlikely “at this point” that Johnny Depp would return for a potential 6th “Pirates of the Caribbean” movie to play ‘Captain Jack Sparrow’. When asked about a Depp return to the franchise, Bruckheimer said: “Not at this point. The future is yet to be decided.” The Hollywood mogul said he’s trying to rebuild the nearly 2-decades-old “Pirates” franchise around a new protagonist, ideally played by Margot Robbie. Bruckheimer said those working on the movie are “developing two Pirates scripts — One with her, one without.” Depp is currently embroiled in a highly-publicized court case against ex-wife Amber Heard.

David Tennant and Catherine Tate are returning to “Doctor Who,” reuniting for new scenes that will coincide with the show’s 60th anniversary celebrations in 2023. Tennant and Tate will reprise their respective roles of the 10th Doctor and companion Donna Noble. The pair’s tenure on the series spanned from 2005-10. When the characters were last seen together, the Doctor had to wipe Donna’s memory in order to save her life. In a statement, showrunner Russell T. Davies said: “Maybe this is a missing story. Or a parallel world. Or a dream, or a trick, or a flashback. The only thing I can confirm is that it’s going to be spectacular.”

I’m sure that I’m not the only person who ever said that my kids are making me “lose my mind”. Well, it turns out science is backing me up. Rearing 3 or more children may spur the onset of cognitive decline, or dementia, later in life, according to the new study from Columbia University’s Aging Center. The scientists found that having 3 or more kids vs. 2 children has a “negative effect on late-life cognition” — the equivalent of being 6.2 years older. The study found additional children incur considerably more financial costs for their parents, thus reducing the family’s income and standard of living, which in turn causes worries and uncertainties that could contribute to cognitive deterioration. Having additional children also curbs women’s participation in the workforce. And professional work improves cognitive functioning among men and women, the study said. On the positive side, having more kids reduces the risk of social isolation for their parents, a situation that can protect against cognitive decline.

A marriage therapist has revealed the top complaint she hears about men from their wives. Corrin Voeller is also a speaker and online educator from Minnesota. She says, as you might have guessed, for many women, their biggest problem with their husbands has to do with . . . housework. In a viral TikTok video (viewed more than 1.5 million times), she said: “One of the top things I hear from women as a complaint (is that) that their husbands are waiting for them to tell them what needs to be done.” She goes on to explain the difference between ‘active responsibility’ and ‘passive responsibility,’ saying “Active responsibility would be you looking around the house for things you could do and taking responsibility for the things that need to happen within the house. Passive responsibility would be being available to help, but waiting for somebody to tell you what needs to be done.” So, what should guys be doing? According to Voeller, what women really want is someone “who is actively responsible for the house and for the children and not waiting for their wife to tell them what to do.”

Ketchup was sold as a medicine in the 1830s.

“Typhoid Mary” was a real person who spent the last 23 years of her life in quarantine.

In St. John, New Brunswick, there is a waterfall that regularly reverses its direction of flow.

A tourist who claimed a San Francisco cable-car accident turned her into a nymphomaniac won $50,000 in damages in 1964.

In the script, Arnold Schwarzenegger’s classic “Terminator” line was “I’ll come back.”

Question: In a poll asking what smells remind people of their childhood, freshly cut grass came in at #1. Certain meals cooking was second. What was #3?

A 19-year-old Florida woman who fled from police in the Florida Keys on Thursday told the deputy who caught up to her that getting arrested was on her “bucket list.” The cop spotted the woman’s vehicle driving recklessly just before 8 a.m. He turned on his lights and siren but the car did not immediately stop. Before she was taken to jail, the woman said getting arrested had been on her bucket list since high school. She was charged with fleeing and eluding police.

BABY NAMES EXPECTED TO MAKE A COMEBACK THIS YEAR:

We all know that trends come back around. And experts have identified a bizarre 100-year trend that allows them to predict exactly which names will be making a comeback this year. Here they are . . .

"Whenever I'm about to do something, I think, 'Would an idiot do that?' And if they would, I do not do that thing." - Dwight Schrute, The Office

The world’s most famous nonuplets have just turned one! Nonuplets? That’s 9 babies. NINE. BABIES. The 5 girls and 4 boys were born last year to Halima Cissé and Abdelkader Arby of Mali, West Africa. The couple were flown to Morocco so Cissé could receive specialized medical care ahead of the birth, and it took a team of more than 30 doctors and paramedics to deliver the babies safely. The nonuplets made history as the most babies delivered in a single birth to survive. All of them were less than 2.5 pounds (1.3kg) when born prematurely, but the miracle siblings are all healthy and thriving under continued medical care. Their proud papa says raising a literal baseball lineup (plus a 3-year-old sister!) isn’t easy, but it’s worth it to see “all the babies in perfect health”.