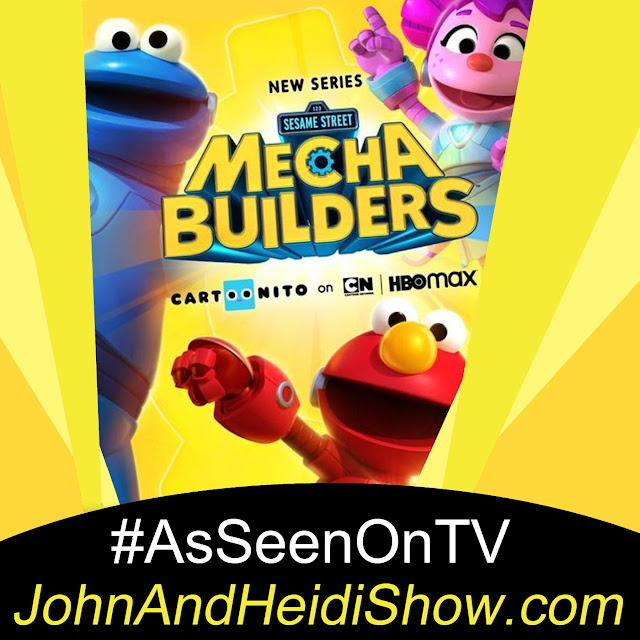 This weekend we visit with Mecha Abby, you may know her from Sesame Street (Abby Cadabby) but we're gonna talk to her about the new "Mecha Builders" series, an animated Sesame Street spin-off. The series debuted on May 9th on Cartoon Network's Cartoonito with episodes released the following day on HBO Max for streaming. https://www.hbomax.com/series

There’s nothing quite as relaxing as spending a summer evening gathered around a campfire with family and friends, some camping treats like ‘smores or hot dog wieners, a few drinks, and maybe a guitar. The problem? Those wonderful evenings usually also involve inhaling copious amounts of campfire smoke . . . because no matter where you sit, it seems to follow you around. Why is that? Physics. According to research scientist Kerry Anderson of Environment Canada, you’re not imagining things, and it’s all because hot air rises. When it does so, surrounding air is drawn into the fire to replace it. When you or I sit next to a fire, we create a barrier that blocks the air from being drawn in. So, the hot air that’s rising ends up being pulled into the area, often toward those sitting around the fire. How tall you are, your distance from the fire, and whether you’re wearing a big jacket or blanket, or sitting in a chair will affect the size of this barrier and how strongly the smoke will be pulled into your face. If you’re looking to enjoy a campfire this weekend, Anderson says you can minimize this phenomenon by having people position themselves evenly around the fire so the smoke isn’t drawn to any one individual.

Mercedes-Benz has sold a car for $142 million, the most ever paid for an automobile. The very rare 1955 Mercedes-Benz SLR coupe that had been kept in the German automaker’s collection was sold to a private owner on May 5 for 135 million euros, the equivalent of US $142 million. The previous record was $70 million paid in 2018 for a 1963 Ferrari 250 GTO. The Mercedes was one of only two 300 SLR Uhlenhaut Coupe prototypes. Money from the sale will be used to establish the Mercedes-Benz Fund, a global scholarship program.

This weekend, Tom Cruise has a chance to do something he’s never done before — open a film to more than $100 million at the domestic box office. The prolific actor, who has made a name for himself as a fearless stuntman, has generated more than $4.2 billion at the domestic box office since 1981, but has never had a film open to more than $65 million. After several pandemic-related delays, “Top Gun: Maverick” arrives in theaters this weekend with a 97% “Fresh” rating from Rotten Tomatoes and strong presale tickets. Box-office analysts are predicting a domestic opening of between $98 million and $125 million for the film.

Don’t you hate it when your bananas are ‘done’ before you’re done with them? Not only is it a waste of money to have to throw out your brown and mushy bananas, it’s also a waste of food, something we should all be very aware of these days. Well, get ready for a game-changer. Bananas that DON’T TURN BROWN could be on the way. The color-changing phenomenon has been slowed by scientists at Florida State University, offering hope for reducing tons of food waste. It’s a complicated fix, that we won’t go into detail about here, but bananas go soggy because of too much oxygen. The scientists found a way to slow formation of the spots by decreasing oxygen levels in their tiny formation sites. The research team says their discovery could help decrease the estimated 50 million tons of food waste which occurs annually as stores and consumers throw out bananas due to their unappetizing appearance.

Well, there goes another tradition down the pipes. Apparently the “black wedding dress” trend is a thing now. As wedding season approaches in earnest, sellers have noted a big uptick in interest in black bridal gowns. And Google trends says searches for “black wedding dress” have actually kept pace with searches for “white wedding dress” over the past year. A spokesperson for David’s Bridal, one of largest sellers of wedding gowns in the US, says black gowns are “chic and dramatic”. Why the surge in interest of ditching traditional white to join the dark side? Apparently, the concept of what is traditional has evolved to include other shades, possibly influenced by the pandemic. After some brides were forced to postpone their weddings due to COVID restrictions, they now want their special day to be unique. As a result, some are picking unique venues, some are wearing sneakers and having food trucks cater their weddings . . . and some have chosen to wear black.

Sesame Street’s ‘Elmo’ is the only non-human to testify before US Congress.

Rats can live longer without water than camels can.

The can opener was invented 48 years after the can.

Sunglasses were originally designed for judges in China to hide their facial expressions in court.

Mosquitoes prefer children to adults, and blondes to brunettes.

The inventor of the Pringles can was buried in one.

Other names considered for the Seven Dwarfs: Snoopy, Dippy, Blabby, Woeful and Flabby.

Question: 16% of cat owners and 12% of dog owners admit that they share THIS with their pets. What is it?

Answer: A comb or hair brush

Well, this is fun! A little weird, but fun! There’s a viral trend going around where people are grabbing a clothes hanger, opening it up, and sandwiching their head inside. Why? Because of an involuntary reaction. For many, when they wrap the hangar around their skull, they involuntarily move their head to one side – and can’t seem to resist, even when they expect it to happen. It turns out the so-called “hanger reflex” was first reported in 1991, and in a 2015 study, researchers studied 120 people, and observed head rotation in 95.8% of subjects. The effect is directional: You turn your head away from the hanger’s hook. We’re not sure what causes people to turn their head when there’s a hangar hanging off of it, but researchers say they may someday be able to use this knowledge to help patients with Dystonia, a movement disorder that causes abnormal muscle contraction. LINKS: https://tinyurl.com/m7abswpz   https://tinyurl.com/v2nuptd

• You can duplicate the warmth of a down-filled bedroll by climbing into a plastic garbage bag with several Canada geese.

• You can compress the diameter of your rolled up sleeping bag by running over it with car.

• The guitar of the noisy teenager at the next campsite makes excellent kindling.

• You’ll never be lost if you remember that moss always grows on north side of your compass.

• ‘Sleeping under the stars’ has nothing to do with a TV competition.

• A lot of hostility can be released by using newspaper photos of politicians for toilet paper.

• In an emergency, a drawstring from a hoodie can be used to strangle a snoring tent-mate.

"Lots of people want to ride with you in the limo, but what you want is someone who will take the bus with you when the limo breaks down." - Oprah Winfrey