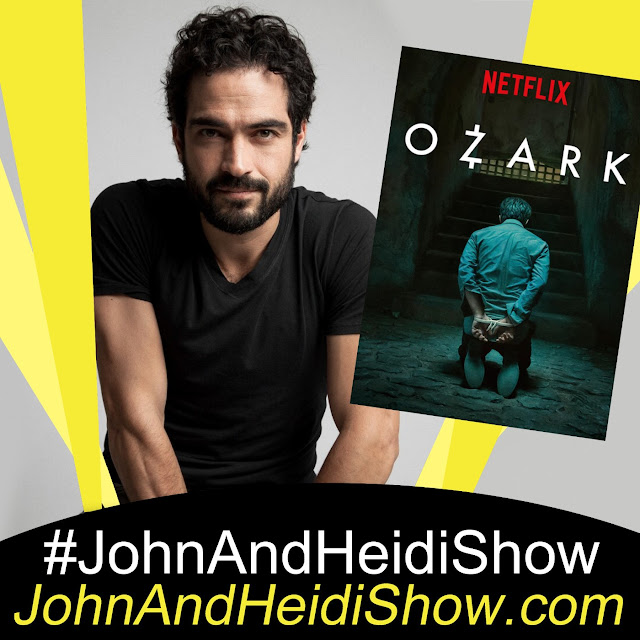 Today we visit with Alfonso Herrera. On the hit show Ozark, Alfonso plays Javier "Javi" Elizondro Navarro is the central antagonist in the fourth and final season of Ozark. He is the nephew of Omar Navarro, who distrusts the Byrdes and seeks to usurp control of his uncle's cartel.

The final season of Ozark is on Netflix now!
https://www.youtube.com/watch?v=yFmy5lXoEfU

According to the American Academy of Dermatology, people typically lose between 50 and 100 hairs every day.

51% of people said they would rather have jury duty than give up coffee for a week!

How much would you expect to pay for a beer at the PGA Championship at Southern Hills Country Club in Tulsa, Oklahoma? Five bucks? Seven? 10 at the most, right? Try $19. US dollars. Yes, this year’s PGA Championship is charging $19 for a can of Stella Artois, or a mere $18 if you want to stick to Michelob Ultra. Cocktails are also $19, while wine is a relative bargain at $13 a pour. For perspective, here are a few ways you could have spent $19 at the Masters this year: 9 soft drinks, 9 bottled waters, 4 domestic beers, 12 pimento cheese sandwiches, or 19 bags of chips.

Helen Mirren and Harrison Ford are joining the “Yellowstone” universe in the upcoming series “1932” for Paramount+. “1932,” which is the show’s working title, is an origin story introducing a new generation of the Dutton family. It’ll explore “the early 20th century when pandemics, historic drought, the end of Prohibition and the Great Depression all plague the mountain West and the Duttons who call it home,” according to the streamer. 1932 is the latest in the Yellowstone franchise, which also includes “1883” and “Yellowstone.” It is scheduled to premiere in December.

Queen Elizabeth II is set to mark her 70 years on the throne with a huge concert featuring some of the biggest stars from around the globe. The “Platinum Party At The Palace” will take place on June 4 and will last about 2½ hours. Alicia Keys, Hans Zimmer, Rod Stewart, and Duran Duran are some of the iconic names set to grace the royal stage. The active members of Queen will team up again with Adam Lambert to open the show before soul legend Diana Ross closes it out with a medley of her greatest hits. Elton John will also take part in the extravaganza, however, his performance will be pre-recorded as he is currently on tour. The evening will also feature appearances by David Attenborough, David Beckham, Stephen Fry, and Julie Andrews, and a performance from The Royal Ballet. The show-stopping spectacle will feature three stages and 3D projections across the face of the palace.

Cheese is the most-frequently shoplifted food item in the world.

Rolls Royce cars are covered in 5 layers of paint, weighing more than 100 pounds.

A suit of medieval armor was once found in a tiger shark’s stomach.

All of the sweaters Mr. Rogers’ wore on “Mr. Rogers’ Neighborhood” were knitted by his mother.

Lobsters listen with their legs.

Growing a beard has health benefits such as preventing allergies, asthma attacks and rashes, and protecting your skin from the sun.

Question: Couples who spend this much on their wedding are the least likely to divorce.

A man has been arrested for shooting Johnny Cash. Or at least his silhouette, which was painted high atop a water tower in Kingsland, Arkansas. Timothy Sled, who police believe is responsible for firing at the 50,000-gallon water tank, is in custody and facing felony charges. The bullet struck the perfect spot to make it appear as though the Cash silhouette was peeing, and caused a leak in the water tank for nearly a week. Officials estimate the tank lost about 30,000 gallons of water per day, and cost $5,000 to fix. LINK: https://youtu.be/_poRrGVZ1Jg

AD SLOGANS THAT FAILED TO CATCH ON:

• “Come for the goat cheese. Stay for the pig’s feet!”

• “Have another serving, porky!”

• “All-natural … except for the synthetic bacon.”

• “Which are you gonna believe … boring lab studies or cool TV commercials?”

• “Almost no chance of infection!”

"A woman is like a tea bag: You can't tell how strong she is until you put her in hot water." - Eleanor Roosevelt

A Pakistani Man Traveled To Birmingham, Alabama To Have Surgery. He Invited The Entire City To His Wedding
https://www.sunnyskyz.com/good-news