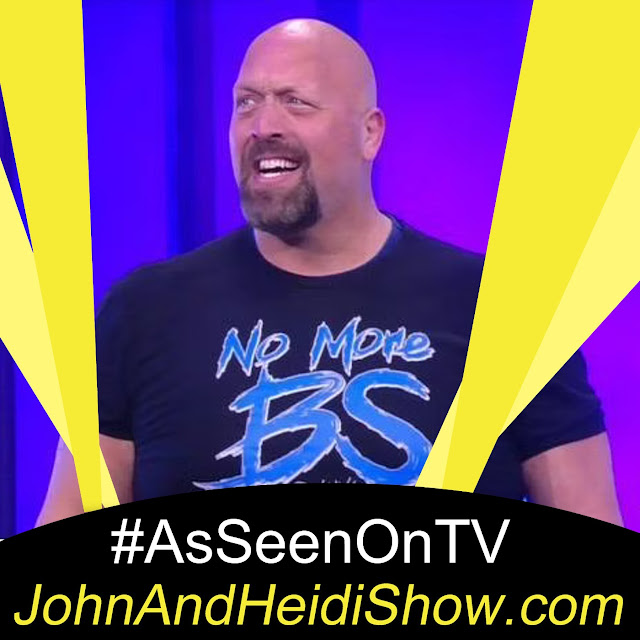 Today we visit with Paul Wight, former WWE Superstar Big Show, about the live action NFT series GENZEROES. This groundbreaking new series is the first of its kind-- and is one that the viewers get to own a piece of. Learn more now at https://www.genzeroes.com/

National Eat What You Want Day

Do you believe in ghosts? If so, you’re not alone. A new survey found that 42% of us believe the dead can contact us from the other side. And 2 in 3 people (63%) who responded to the OnePoll survey claim they’ve seen signals or signs from a dead loved one. The most common signs indicating that a spirit is nearby? Sensing a presence in the room (27%), pets behaving strangely (23%), and smelling a particular scent and not knowing the source (22%). To top it off, 1 in 4 people believe the spirit of a loved one plays a major role in their life — guiding them, helping them to secure jobs, watching over them when they’re sick, and keeping them safe when they travel.

Co-workers who wear designer brands are less likely to be seen as team players, according to a new study. The American Psychological Association reports that people who do not show off their wealth and social status appear more cooperative and willing to collaborate with others. While previous research has found that people who flash luxury brands and how well-off they are appear more disciplined, intelligent, and competent, the new research suggests co-workers perceive those with high social status as someone who cares more about their self-interest than helping others.

The “Arsenio Hall Show” is coming back – for one week only. Arsenio Hall will bring back his 1990s talk show during the Netflix Is A Joke Festival in Los Angeles on Monday. He’ll host his show from the Roosevelt Theater at the Hollywood Roosevelt. Neal Brennan is his guest for the first night, while others scheduled throughout the week include Gabriel “Fluffy” Iglesias, 85 South, Katt Williams, Snoop Dogg, and Chelsea Handler. This is Hall’s latest return to late night, as he recently hosted “Jimmy Kimmel Live!” during Kimmel’s summer hiatus.

We hope you’re ready for this. Daniel Radcliffe inhabits the frizzy-haired, mustachioed persona of “Weird Al” Yankovic in the new teaser trailer for the Roku original film about the parody artist, which is coming to the platform’s free streaming channel this fall. The trailer for “Weird: The Al Yankovic Story” shows the “Harry Potter” star bare-chested on stage taking a swig from a bottle of… something, and then spitting it into the air, and saying dramatically: “Anyone got an accordion?” Yankovic co-wrote the script with Eric Appel, who is also directing. LINK: https://youtu.be/MVXGgwhO6jc

Elon Musk has answered the question so many people have been wondering since he agreed to spend $44 billion on Twitter: why not use that money for charity? Entertainment Tonight decided to broach the topic with Musk at the Met Gala on Monday, asking why he didn’t use the money for charity, philanthropy, or to do “more good”. His response: “I do do a lot of things philanthropically and really my companies are intended to do good for the future of humanity.” He out that Tesla aims to “accelerate…sustainable transport and energy”, while SpaceX is “providing internet to the least served people around the world.” He also cited his work in Ukraine, where he has sent Starlink terminals to help keep the country connected amid its ongoing war with Russia.

Snapchat has created a selfie camera that can fly around your head and follow you around while taking pictures. The social media giant, which has millions more daily users than Twitter, has unveiled “Pixy”, a miniature drone they call “your friendly flying camera.” The $230 device can take-off from your hand and follow any of 4 preset flight paths, including floating, orbiting, and following wherever you lead. Described as “a pocket-sized, free-flying sidekick”, Snapchat says Pixy can find its way back to your hand, and land gently at the end of the flight. LINK: https://youtu.be/3xxzPPc6qcY

The country Brazil is named after the brazil nut.

The word “girl” was originally used to refer to any small child, regardless of gender.

Despite the fact that she has her own fragrance line, Beyoncé is allergic to perfume.

The word “MacGyvered”, inspired by the TV series, is in the Oxford English Dictionary.

You can learn the High Valyrian language from “Game of Thrones” through an online course.

Question: When asked “What’s the hardest part about being a Mommy”, 14% of kids said THIS. What is it?

A Florida woman celebrated her 100th birthday by trying something new — jumping out of a plane. Raymonde Sullivan, who served on the front lines as a nurse in World War II, took to the skies Monday on a tandem skydive. When asked about it by a TV reporter, she said: “I had never done it, and I’ve done a lot of things in 100 years so I thought I must do it while I can.” Sullivan also decided her first time skydiving would also be her last, saying: “It’s scary.”

PACKING TIPS FROM THE PROS:

✓ Make a list: Not only will it reduce the chances of leaving essentials behind, it will help save crucial time when packing. (Darn. I think I packed the list…)

✓ Don’t fold clothes: Instead, roll garments tightly – they’ll be more compact and it gives you extra space. It can also cut down on creasing. (I don’t know how to roll clothes, either…)

✓ Packing cubes: Not only will they save crucial space; they can also be used to organize outfits and ensure garments don’t move around as much. (One more thing to pack?)

✓ Be versatile: The temptation is to throw just about all your clothing into the suitcase. But stick to the essentials: Garments that can easily be dressed either up or down for a variety of situations, like jeans and plain t-shirts.

✓ Leave space: You might fall in love with a souvenir or find some awesome new clothing, which you’ll want to have room for.

✓ Wear the heaviest items: If you’re headed somewhere cooler and will need a coat, wear it. This will give you some extra space, and help with the bag’s weight limit.

✓ Refillable travel bottles: Not only are they better for the environment, smaller shampoo and conditioner bottles, etc., take up less space.

✓ Don’t overpack: Only bring what you intend to use – no “just in case” items. You can always buy anything that becomes needed at your destination.

"You only live once, but if you do it right, once is enough." - Mae West