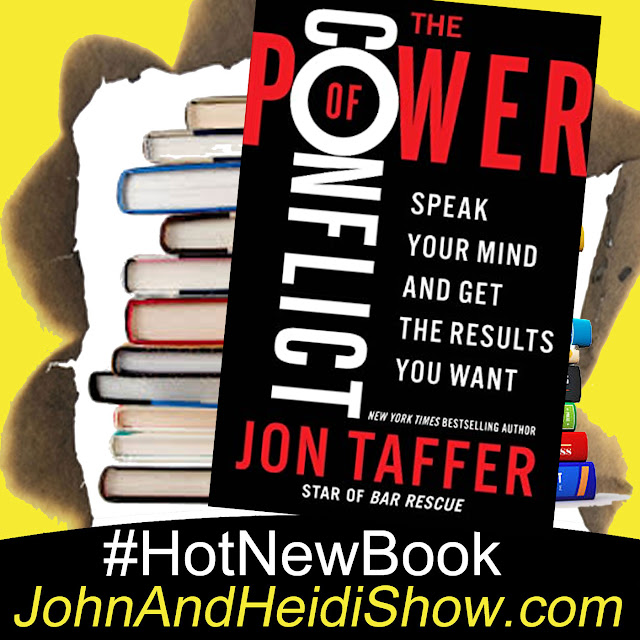 Today we speak once again with Jon Taffer, the star of Bar Rescue, and a New York Times Best Selling Author! We'll talk about his new book THE POWER OF CONFLICT. Available now - https://amzn.to/3FOwMxH

A new study says that there’s something that you can do to reduce anxiety as you slumber: listening to yoga music. The soothing sounds of yoga also led to a small increase in positive feeling, as well as an increase in heart-rate variability—which refers to the heart’s ability to adapt to going from “fight or flight” mode to “rest and digest” mode.

Most consumers—across all age groups—are impulse shoppers. Roughly 80% of US shoppers surveyed said they had second thoughts about buying a product they added to their cart

Exercising during the workday can have untold cognitive and work performance benefits. Past studies have shown that moderate exercise during the day can leave workers more productive and satisfied with their day overall. Similar to recess at school, working out during the lunch hour can help you focus later on, while keeping you healthier. Some companies are even encouraging workers to carve time out of the day for workouts or offering free classes during work hours.

“The Late Show with Stephen Colbert” has gone dark again this week after its host was seemingly struck by another bout of COVID. CBS announced the show will “not be taping new episodes until further notice”, and that Colbert is “experiencing symptoms consistent with a recurrence of COVID”. The show added on Twitter: “Out of an abundance of caution for his staff, guests, and audience, he will be isolating for a few additional days.” The Late Show was also forced to cancel a show on April 21 after Colbert contracted the virus. Colbert joked on social media that the news marked the “worst sequel ever”.

Celebrity chef Mario Batali was found not guilty Tuesday on charges of indecent assault and battery related to the alleged groping of a star-struck patron at a Boston restaurant in 2017. The judge noted Batali’s conduct was “not befitting of a public person of his stature”, on that night, but said his accuser has “significant credibility issues” that supported the defendant’s “contention that her motive was financial gain.” Batali stepped away from public view in the wake of the allegations and his restaurant group cut ties with him in 2018.

The “Roaring 2020s” are just around the corner: six in 10 Americans plan to go all out in the coming years by enjoying what they missed out on in the last few years.

A survey of adults from Alliant Credit Union found 70% are looking to have more fun with their finances over the next decade, with 84% stating their plans to spend more freely are due to having built a financial safety net during the pandemic.

36% of boomers (57+) plan on enjoying their money while also sticking to a very tight budget.

And when it comes to emergency funds, close to three-quarters (73%) have a savings account set up for when they need it most — with an average of $3,816.

77% of millennials had rethought their budget since the pandemic began, above the 72% average set by all generations.

Four in five Americans are careful with their finances, with 73% of people regularly following a monthly budget for all their financial needs.

Half of the funds in people’s budget goes to rent/mortgages (26%) and groceries (23%). Meanwhile, 18% regularly goes to recurring bills, 17% to utilities and 17% to recreational activities and fun.

Forty-six percent of Gen-Z Americans have multiple savings and checking accounts to help them budget. Respondents are also likely to use spreadsheets (45%) and budgeting apps (38%) to help them stay on top of purchases.

WHAT WILL MONEY BE SPENT ON IN THE ROARING 2020s?

If you go blind in one eye, you only lose about one-fifth of your vision.

If the average person ate 1,627 pieces of candy corn, they would die.

Before 1850, most golf balls were stuffed with feathers.

Spammers get approximately 1 response for every 12 million emails they send.

The harmonica is the world’s best-selling music instrument.

You can tell a pig is sick when it stops curling its tail.

During 2015, Taylor Swift earned more than $1 million per day.

Question: 14% of adults admit they’ve had a drink or two before going HERE. Where?

The state of California has introduced a new law that requires households and businesses to compost all food scraps, instead of throwing them into the trash. This law, known as S.B. 1383, took effect on January 1, 2022, although it was signed in 2016 by then-governor Jerry Brown and will still take another two years to phase in fully. The bill's goal is to reduce greatly the amount of food scraps going to landfill, where they decompose and emit methane, a greenhouse gas 84 times more potent than carbon dioxide over a 20-year period. S.B. 1383 will reduce organic waste in California's landfills by 75%, once fully implemented.

EVERYDAY THINGS THAT YOU DIDN’T REALIZE HAD A NAME:

➠ The cardboard sleeve on a “to-go” coffee cup: “Zarf”

"Life is pleasant. Death is peaceful. It's the transition that's troublesome."