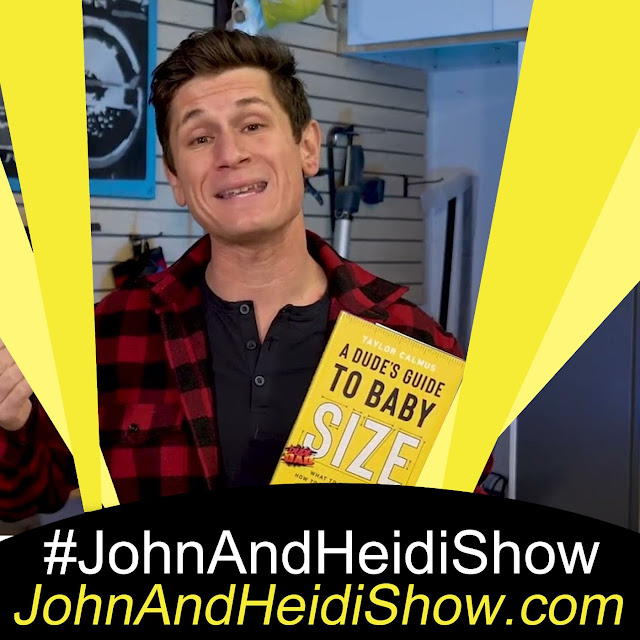 Today we visit with Taylor Calmus, better known as "Dude Dad”. We will talk about his new book A DUDE’S GUIDE TO BABY SIZE What to Expect and How to Prep for Dads-to-Be. AVAILABLE NOW https://amzn.to/3ObBfgP

OK, if you like to “smoke”, wake up and listen up, because this is important. Those who “consume the herb” may be a little too chill when it comes to navigating conflict with their romantic partner, according to new findings published in the journal Drug and Alcohol Dependence. In a survey, cannabis users were found to be more withdrawn and negative amid conflict with their partners, and more unaware of how poorly they manage those issues. Cannabis users were determined to be less flexible and willing to compromise — yet, paradoxically, also reported higher satisfaction with the outcomes of arguments with their partners, meaning they lack the self-awareness to recognize their adverse engagement.

Kitchen sponges harbor more bacteria than kitchen brushes, which may be a more hygienic way to clean your dishes, according to researchers in Norway. The study, published in the Journal of Applied Microbiology, says that while many bacteria are not harmful, those that are — like salmonella — can spread from sponges to hands, kitchen surfaces and equipment, and potentially make people sick. What surprised the researchers most was that it didn’t really matter how people cleaned their sponge or how often, when it comes to bacteria growth. Overall bacteria levels were found to be lower in used brushes than sponges.

Tom Cruise has reportedly split from Hayley Atwell for the second time. The 2 first broke up last September, and they’ve now decided to call time on their romance once again, according to a source, who said: “They get on really well, and have fantastic chemistry, which is why they decided to quietly give the relationship another try earlier this year. But what was working behind closed doors didn’t work out so well when it was made public, and the fanfare around them as a couple exploded again.” The pair have apparently decided they are better as friends, according to The Sun newspaper.

John Cena made time during a recent European trip to connect with a fan who fled Ukraine with his mom. According to a video posted to the WWE’s YouTube channel, Cena got word that Misha Rohozhyn, a non-verbal 19-year-old with Down syndrome, escaped the war-embattled nation with his mother, Liana, after their home in Mariupol was destroyed, and that Liana encouraged Misha throughout the journey by telling him they were on their way to see his hero, John Cena. Last weekend, Cena turned Liana’s fantasy into reality when he traveled to a residence near Amsterdam where the refugees were staying. Cena says they spent the “afternoon building blocks and eating cake,” and added “That’s a special afternoon when it comes to the new friends I was able to meet.”
LINK: https://youtu.be/wUOM0Hhj87w

It’s been a few years since news surfaced that a TV series based on “A League of Their Own” was in development. Now, fans know what the show will look like as Amazon has released a teaser trailer of the series. The synopsis says: “A League of Their Own evokes the joyful spirit of Penny Marshall’s beloved classic while widening the lens to tell the story of an entire generation of women who dreamed of playing professional baseball.” The cast includes Abbi Jacobson, D’Aarcy Carden, Nick Offerman and Molly Ephraim. The series, based on the 1992 film of the same name, will premiere Aug. 12 on Prime Video. LINK: https://tinyurl.com/39amrwp9

New York City’s coffee scene has gone to the dogs. Black Lab Cafe has just opened on the Upper West Side, serving up treats for both humans and their 4-legged companions. It claims to be the first java joint of the canine kind. The owners’ black labs, Daisy and Lola, serve as mascots for the business. Puppy parents and their dogs enter through a vestibule with 2 sets of doors – just in case any make a run for it. There’s a seating area there, which connects to a second section, where humans can order food and coffee to bring back to enjoy with their furry friend. Dogs can enjoy gourmet grub, while humans get coffee and espresso drinks. The menu will soon be expanded to include sandwiches, smoothies, and alcoholic beverages. The rules posted on the wall asks customers to play nice, avoid humping, clean up any accidents and call the “dog bouncer” (an owner) if any help is needed.

If a healthy house plant helps you relax, an unhealthy plant doesn’t really do anything right? Nope. Unhealthy or dying plants actually go the other way—they contribute to making us depressed. A study for the English Royal Horticultural Society found that dead or sickly houseplants are worse than having no plants at all, and should be removed. The study from the University of Reading asked participants to rate plants in various states of health for their appearance and perceived ability to clean the air. A neglected palm used in the study “was the least attractive, least preferred plant, and participants thought the appearance was unhealthy and depressing.” The authors concluded that aside from removing sick or dead plants, people with little experience looking after plants should avoid ones that are difficult to care for. Another conclusion was that people should avoid decorating the home or office with plants that feature the color brown, as a large number of participants said plants of that color made them feel “sad”.

Genetically, a fungus is more closely related to animals than to plants.

In America, it is a federal crime to use your roommate or friend’s Netflix account.

In Zimbabwe, it is illegal for citizens to make offensive gestures at a passing car.

A bolt of lightning is 5 times hotter than the surface of the sun.

Another term for nieces or nephews is “niblings”.

Question: 17% of millennials say they’d rather give THIS up for a week than do without their cellphone for a week. What is it?

NASA is putting a team together to study “unidentified aerial phenomena”, popularly known as UFOs. It will gather data on “events in the sky that cannot be identified as aircraft or known natural phenomena — from a scientific perspective,” the agency said. NASA said it is interested in UAPs from a security and safety perspective, and claims there is no evidence UAPs are extraterrestrial in origin. The study will begin this fall and is expected to take 9 months.

SIGNS YOU’RE NOT A CHEF:

• You need a recipe to make a peanut butter and jelly sandwich.

• 90% of the items on your shopping list end in the word “Boyardee”.

• You’re been forced to buy 3 new microwave ovens in the last year.

• When you offer leftovers to the dog, he says “No!”

• You burn the lemonade.

You know you've reached middle age when you're cautioned to slow down by your doctor, instead of by the police." - Joan Rivers

104-Year-Old Woman Is Granted Her Lifelong Wish Of Meeting A Penguin
https://www.sunnyskyz.com/good-news/