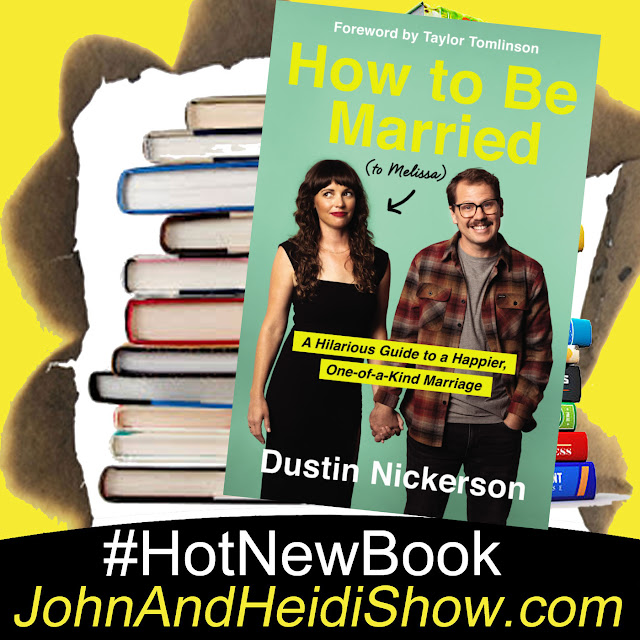 Today we visit with a very funny standup comedian Dustin Nickerson. He is “the world’s most average person.” A comedian who performs in over 300 shows a year, his videos have been viewed over 20 million times, and he has appeared on Comedy Central, Hulu, Fox, and Netflix alongside Kevin Hart. His stand-up comedy special, Overwhelmed, which was produced by KevOnStage, was one of the highest-rated comedy specials on Amazon Prime

How to Be Married (to Melissa): A Hilarious Guide to a Happier One-of-a-Kind Marriage.” https://amzn.to/3HUnIsa

Getting a great education doesn’t just help people be more successful today, it may also keep them alive longer in the future. A new study finds that people with a stronger academic background show fewer signs of age-related mental decline during old age.

While people born during the spring and summer months tend to have "excessively positive temperaments," they're also "more likely to experience rapid shifts in mood," according to 2011 research published in the Journal of Affective Disorder. On the other hand, those who made their entrance into the world during winter are "less likely to have irritable temperaments."

Science is finally backing up what you’ve long known: that smoking weed does, in fact, make you nicer — and less greedy, to boot. In a recent study published in the journal Scientific Reports, University of New Mexico researchers found evidence that cannabis use makes people more empathetic, as well as less motivated by money.

Donna Mills claims to be the blueprint for Grease’s ‘Sandy’. The TV icon, who is famous for her “Dallas” spin-off series “Knots Landing”, shared a video in which she dresses up as the character from the 1978 movie musical, a role made famous by Olivia Newton-John. In the clip, Mills says she was the “model” for the character. In the caption, she wrote: “Does the character Sandy from Grease look similar to me? Here’s why! Did you know that I went to school with Jim Jacobs?”, the musical’s co-writer. Mills added with a laugh that he “used me as his model for Sandy.” She goes on to say: “I didn’t know it at the time, but I found out years later, I was the original Sandy.”

Michael Jackson’s estate claims in a lawsuit that a man engaged to one of his siblings used the chaos surrounding his death to steal a large amount of property from the singer’s home. Jackson’s estate says Jeffre Phillips started staying at the home right after Jackson died on June 25, 2009 and made off with items, including Jackson’s iPhone video cameras, and computers, his drivers license, prescription pills and some clothes, plus handwritten notes and a briefcase filled with personal and business papers. The lawsuit does not specify which of Michael’s siblings Phillips was engaged to.

With gas prices at or near all-time highs, we need all the help we can get when it comes to minimizing costs. So, what about that little “eco” button on your car’s dashboard? Does it really do anything, aside from illuminate a little green leaf on the display? Sheldon Williamson, Professor at the Automotive Center of Excellence at Ontario Tech University, says that while some car makers claim eco mode may help you realize as much as 10-12% in fuel savings, most of us aren’t going to save that much, but it’s still worth it. Higher end luxury cars packed with more technological advances may be more likely to reach the 12% savings threshold, but most vehicle owners will experience a savings of about 5%. For most vehicles, eco mode is most effective when cruising on the highway at a steady speed, travelling through the city under normal conditions, driving across flat terrain, when nothing is being towed and when you don’t need maximum air conditioning.

Most people have facial plastic surgery because they’re hoping to shave a decade or so off their perceived age. But a study found that the average amount of “years saved” is only three. In fact, if your plastic surgeon tells you he can make you look X years younger, you might look for a new one. There’s no guarantee of how many years younger you’ll look, which is why reputable plastic surgeons should tell you their work will make you look less tired and more refreshed.

Pound for pound, human bones are stronger than steel.

Sleeping on your stomach can induce weird, scarier and sexier dreams.

You share your birthday with at least 9 million other people in the world.

The average person will grow 6.5 feet (2 meters) of nose hair in their lifetime.

Question: 55% of people admit they have lied about THIS to avoid hurting someone’s feelings. What is it?

UK police were flabbergasted after attempting to save what they thought was an elderly woman in distress — only to discover that the “victim” was actually a parrot yelling “help!” West Midlands Police received a report of an elderly person “shouting for help” inside her house in Sutton Coldfield. But when the team knocked in the door, they found the property empty, aside from a parrot in a cage in the living room. Soon after, the woman’s son arrived and told them that the bird was the one making the distress cries. A tweet from the police force detailing the hilarious mixup is currently blowing up on Twitter, complete with a pic of an officer posing with the pranking parrot. LINK: https://tinyurl.com/2p5hp8zc

MOST-VISITED WEBSITES, 2022:
It was a short run, but TikTok is no longer the most popular website in the world. Last year, the tech world had a bit of a shock when Google was knocked off the top of the list. But apparently, lots of us are searching for Google again, as it has regained its’ title. Here are the world’s 10 most popular domains over the last 30 days, according to Cloudfare…

Notably, Twitter and WhatsApp have both slipped out of the top 10. And it should be pointed out that “adult” domains were excluded from the results.

"Love is blind but marriage is a real eye-opener." - Pauline Thomason

A wedding nightmare turned into a Celtic dream when, after a plane-load of problems, the local community on the Isle of Skye lent a hand. Amanda and Paul Riesel flew over 4,000 miles from Florida, to Scotland, only to find out their luggage was missing – including their wedding dress and suit. The couple had spent almost $15,000 on the trip, which they had been planning for over 2 years. They were ready to call the whole wedding off until photographer Rosie Woodhouse, appealed to locals to help. Within hours, Amanda had been offered a selection of 8 wedding dresses in her size, and Paul was given a kilt. The bride-to-be had luckily carried the wedding rings and flowers in her carry-on. In another kind gesture, the photographer even invited the couple to her friend’s house for a meal because most restaurants were closed. Afterward, Amanda called the couple’s big day “imperfectly perfect.”