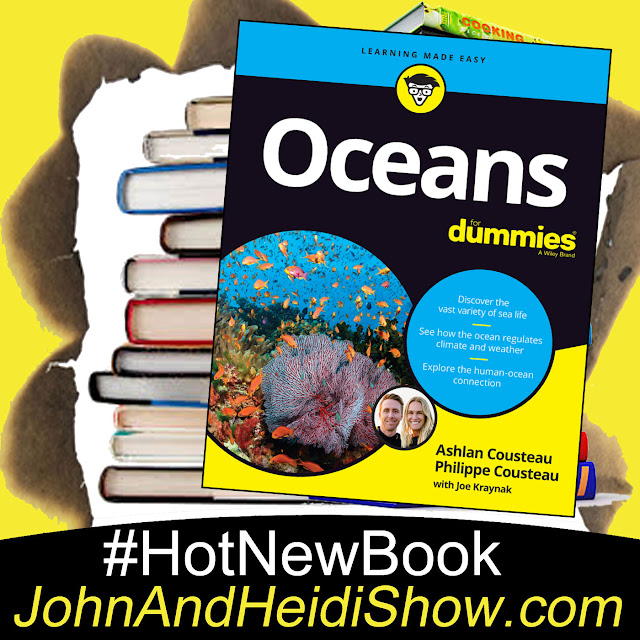 World Ocean Day is an annual reminder for people everywhere to protect and restore our shared ocean and climate. Phillipe & Ashlan can share unique insights into the health of our ocean and discuss some of the steps we can take every day to be part of the solution for a brighter future for our ocean and the planet.

People can also visit www.EarthEcho.org for a wealth of information and resources for making a positive impact on the ocean.

A study of adults from Snap Fitness found they generally need some sort of change in their life every seven months. The average adult will get bored of the same daily routine after 17 months, but one in 10 will get tired after little longer than one month of the same old, same old. 12 per cent like to mix up their workout routine every week, while they reset their diet of choice every 12 months. But when it comes to careers, we prefer to refresh our job every eight years. Of those who exercise, 12 per cent will adjust their fitness goals on a monthly basis, in order to continually improve their athletic abilities, keep things interesting and boost their confidence. But 36 per cent named cost as the biggest barrier to making changes to their exercise routines, while almost a third (31 per cent) put it down to a lack of confidence. And just over a quarter (27 per cent) blame a lack of time. It also emerged three in 10 believe change is important to keep life exciting, with nearly half referring to the benefits to their physical health as a top priority when making alterations to their existing routines. In fact, a quarter are looking to adjust the amount of exercise they do, while a fifth are going to modify their diet in the year ahead.

Researchers have made an odd discovery male mice: bananas stress them out. Scientists at McGill University in Montreal were studying the reaction of male mice to pregnant females. Male mice are known for sometimes killing pups. So, heavily pregnant and lactating female mice emit chemicals to warn these males away. The authors found that a compound found in female mice’s urine is similar to one found in some fruits and used to produce banana extract. Researchers observed that chemical compounds in bananas triggered a stressful response in the male mice, similar to the stress response when about to engage in a fight.

After a 3-year wait, “Stranger Things” is back and setting records on Netflix. Season 4 volume 1 broke the record for biggest-ever premiere weekend of an English-language series, which was previously held by Season 2 of “Bridgerton.” According to Netflix’s newly released Top 10 rankings, Season 4 of the sci-fi series was viewed for 287 million hours during the week of May 23-30, landing in the #1 position. This comes after only 3 days of availability, as Part 1 of the season debuted with 7 episodes on Friday. All 4 seasons of “Stranger Things” made it back into Netflix’s Top 5 titles for the week of May 23-30.

“The View” is going on vacation, but the co-hosts will still have to report to work. Amidst a blast of confetti on stage, followed by a steel drum performance and tropical drinks for the stars, Whoopi Goldberg said: “This show has been on the air for 25 seasons and we are long, long, long overdue for a vacation. So, The View is heading to the Bahamas!” Goldberg, Joy Behar, Sunny Hostin, and Sara Haines will host a week of shows beginning June 27 from the Baha Mar Resort in Nassau, which happens to be one of the show’s sponsors. Goldberg teased “great guests and musical performances, and, of course, the hottest topics you can imagine.”

“The Office” is coming back! But probably not in the form that you had hoped. Saudi Arabia is getting its own version of classic comedy. “Al Maktab,” the name of the Saudi Arabian version, will span 20 episodes. BBC Studios, which licenses the franchise, said “Although office working may look slightly different for many of us in 2022, the familiarity of these well-observed characters as they navigate petty rivalries, moments of friendship and humor, and a boss that sometimes makes a fool of themselves still rings just as true.” The new version, which begins production in June, is set at a courier company.

Have you ever lost track of time while mindlessly scrolling through your social media feeds? Of course you have . . . we all do it. Well, here’s your excuse: You entered a “dissociative state” which not only made time irrelevant, you totally lost track of reality. University of Washington researchers watched as a group of social media users interacted with a “Twitter-like” platform. Sure enough, many appeared to space out while enjoying the app, where they became almost unaware of everything else in their lives, but couldn’t help but keep scrolling. The study’s lead author said that he likes to refer to this phenomenon as “dissociation” rather than “addiction”, because everyone naturally dissociates in many ways throughout our day – whether it’s daydreaming, watching TV, or surfing the net. The researchers found that this isn’t a result of users’ lack of self-control, and taking these mindless breaks can actually be restorative.

As well as helping us FEEL alive in the morning, it turns out that a daily cup of coffee might actually KEEP us alive for longer, too – even if we put sugar in it! A new study by scientists from the Southern Medical University in China, examined the coffee consumption habits and health of 171,000 people over 7 years. People who drink unsweetened coffee were 16-21% less likely to die during the study than non-coffee drinkers, while people consumed 1-4 cups of lightly sweetened coffee were 29-31% less likely to die.

If aircraft carriers ran on gasoline, they’d get about 6 inches to the gallon.

Pilots jokingly refer to a midair collision as an “aluminum shower”.

There are more Lego mini-figures than there are people on Earth.

The producer’s first choice to play the lead role in “Dirty Harry” was Frank Sinatra.

People are typically perceived as more attractive when they tilt their heads.

Snakes can sense a coming earthquake from 75 miles (121km) away, and up to 5 days before it happens.

Question: In a survey, 2/3 of women said that having one of THESE makes a man “un-dateable”. What is it?

A California woman was pretty happy when she arranged to get a couch for free through a Craigslist ad. Imagine how she felt when she found $36,000 inside! Vicky Umodu of San Bernadino County was looking to buy some used furniture when she found the listing, later learning that a family was giving it away due to the recent passing of a loved one. But once she moved the pieces to her home, she found the cash – all $36K – underneath a cushion. She notified the family, offering to return the money, who reciprocated with a cash reward for her honesty. The family said they aren’t sure why the cash was in the couch, and they later discovered hundreds of dollars stashed away in other parts of the residence.

Unwritten Rules You Should Be Following Every Day But Aren't

- Don't one-up someone when they finish telling you a story by telling one of your own.

- Don't point out a personal flaw if it can't be fixed in 30 seconds or less.

- Do not swipe left or right if someone shows you a photo on their phone.

- Don't ask for something you know a person only has one more of.

- Only suggest to split the check evenly if you ordered the least expensive meal of the group.

- If you borrow something, don't let someone else borrow it from you.

- If you're borrowing something for a third time, you need one of your own.

- And if you borrow someone's car, fill up the tank before you return it.

- Leave something better than when you found it.

- Be kind to people working in customer service.

- If you cancel on a friend, it's your responsibility to reschedule.

- RSVP even if you can't make the party.

- Don't make plans in front of people you are not inviting.

- Don't whisper something to someone in the presence of others.

- Give in-person encounters your full attention.

- Use headphones when listening to something on your phone in public.

- Don't tell someone how much you hated something if they're excited about it.

- Replace the toilet paper roll if you're the one to finish it.

- Announce your visits before your arrive at someone's home.

- Always implement "off before on" when using public transportation.

- Don't mess up an apology with an excuse.

- And say "thank you" when someone holds the door for you.

"My friends tell me I have an intimacy problem. But they don't really know me." - Garry Shandling

A woman whose family fled to Britain to escape a war has closed her seaside hotel to tourists—so she can give Ukrainian refugees a place to stay. Nitsa Michael is no longer taking guests at the Seaward Hotel in Weston-super-Mare, England. Instead, she has rolled out the welcome mat to 22 Ukrainians, so far, providing a “home away from home”. Her family fled Cyprus following a Turkish invasion in 1974, and she wanted to do something to help people in the same ‘horror situation’, fleeing from Russian aggression in Ukraine. The 84-year-old says she “felt for them” and decided to help in a “big way”. Her daughter Michelle, who runs the hotel, says the 22 arrivals share meals and time together, “and basically they heal together.” The hotel has room for 48 more.