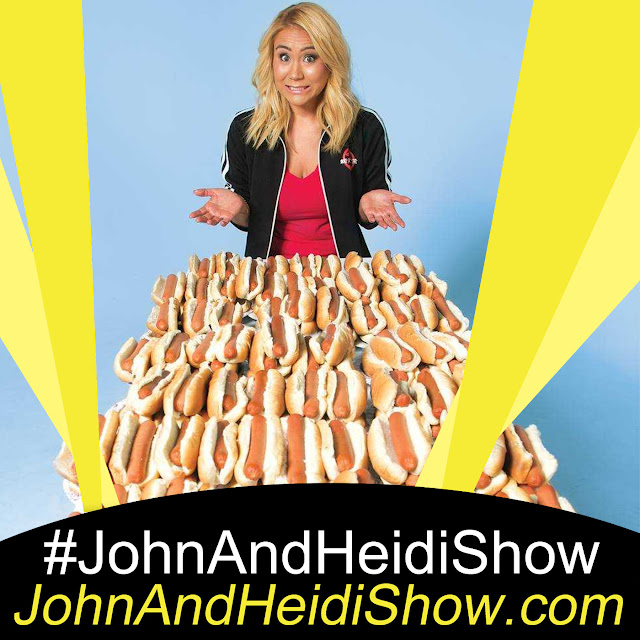 Today we visit with Miki Sudo, the #-1 ranked female eater in the world. She ate 48.5 Nathan’s Famous hot dogs and buns to set a new women’s record in the discipline. She will return this year after taking 2021 off because she was pregnant. Nathan’s Annual 4th of July Hotdog Eating Contest at 12noonEST on ESPN. https://nathansfranks.sfdbrands.com/en-us/promotions/hot-dog-eating-contest/

The majority of people in America aged 50 and up have not been checked for hearing loss anytime in the past two years, according to a recent poll.

Researchers surveyed adult subjects who had maintained a 30-pound weight loss for a year or more, and found that the key to their success lay in the consistency of their workout routine. Sixty eight percent of the subjects exercised at the same time every day, and nearly half (47.8 percent) worked out early in the morning, which is known to jumpstart the metabolism, enhance productivity, and boost energy levels throughout the day

Comedian Khaby Lame has become the king of TikTok — all without uttering a word. With more than 142.9 million followers, he has dethroned teen dancer and content creator Charli D’Amelio to become the most-followed person on the platform. 22-year-old Lame, who was born in Senegal and lives in Italy, creates videos in which he reacts wordlessly to absurd life hacks, racking up millions of views and likes with each post. He also posts comedy skits that feature his expressive reactions — but no words. His reactions personify the term “shaking my head,” or SMH in internet shorthand. LINK: https://www.instagram.com/khaby00/?hl=en

A court in Massachusetts granted a temporary harassment prevention order against Ezra Miller to a family who says Miller “menaced” them in February. This is one of the major stories circulating about Miller while the actor is avoiding authorities who want to question them. The alleged victims live in a multi-family home and say that on the evening of Feb. 2, Miller was in their downstairs neighbor’s home. The alleged victim said that Miller harassed her 12-year-old gender non-binary child. Some are wondering whether Warner Bros. will still release “The Flash” movie they star in next year.

Millie Bobby Brown, best known for rising to fame as a child, portraying ‘Eleven’ in the Netflix drama “Stranger Things,” is rumored to be in talks to appear in “Star Wars”. UK’s “Mirror” reports that Brown has been in “secret” talks with Disney execs over the role, which could potentially have a $15 million payday. As she was growing up, her resemblance to the late Carrie Fisher had many fans begging Disney to cast her as a young ‘Princess Leia’.

IKEA has a reputation for being stylish and economical, but that last trait is taking a hit, as a spokesperson told Business Insider that prices will increase by an average of 9% in 2022. (some of this has already taken place) Like many businesses around the globe, the Swedish furniture maker is "not immune to the macro-economic developments" of supply chain problems brought on by the COVID-19 pandemic. The Guardian reported that some prices already have increased by as much as 50% in recent months, citing the rise in cost of a Malm desk in England from £99 ($121) to £150 ($202)

We know we need sunscreen in the blistering heat of summer - but few of us keep the skincare ritual going all year round. However, according to dermatologists, just because it is cold does not mean your skin is not being exposed to cancer-causing and wrinkle-inducing damage from ultra-violet rays. Although there is a seasonal drop in UVB rays, which cause sunburn and skin cancer, there is not a significant decrease in UVA rays, which cause skin ageing and dark spots. If it is snowy, the reflected light can be just as damaging as 80-degree sun - especially if you're in a higher altitude. But even in milder climes, you need to be wearing at least SPF 30 and reapply every two hours to protect yourself.

Strawberries are the only fruit with seeds on the outside.

‘Baby Shark Dance’ – Pinkfong has the most views on YouTube, with more than 10.5 billion

Cairo is the capital city of Egypt

The electric chair was invented by a dentist.

Question: 73% of online shoppers said they felt a sense of anxiety when this happened. What is it?

Answer: When their package is delayed.

The fire department of Seoul, South Korea, is warning cat owners to be especially careful in the kitchen. More than 100 house fires in the city between January 2019 and November 2021 were attributed to cats accidentally turning on electric stoves, according to the Seoul Metropolitan Fire & Disaster Headquarters, per The Korea Herald. If an electric stove has touch-sensitive buttons, a cat can accidentally switch it on by jumping up and hitting the controls with their paws. Luckily, there are easy things you can do to prevent your cat from becoming an unintentional arsonist. Many electric stoves with button controls have a function that allows users to lock the buttons, which keeps them from being activated by someone who shouldn’t do so, like a cat or a small child.

The Seoul officials recommended using this feature, as well as keeping flammable objects, like paper towels, away from the stove

SIGNS IT’S BEEN A LONG WEEK:

• You can’t even be bothered making the sandwich; you just eat the ingredients separately.

• The coffee isn’t working, so you start eating it from the jar.

• You take a screenshot on your phone to show a friend the crack on the screen.

• You ran out of alcohol on Wednesday night.

• You haven’t had to delete your browser history once this week.

• You just microwaved your muffin for 37 minutes…

• You spent half of Thursday morning frantically searching for motivational quotes.

• You’ve used the phrase “This has never happened before” more than 3 times since Monday.

• You aren’t even sure if it’s Friday.

"The secret to a long marriage is to stay gone." - Dolly Parton