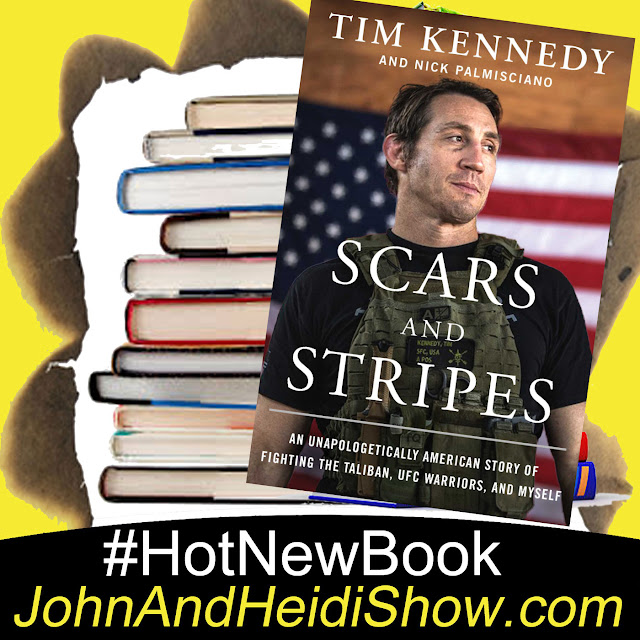 Today we visit with Decorated Green Beret sniper and UFC headliner Tim Kennedy. His new memoir Scars and Stripes: An Unapologetically American Story of Fighting the Taliban, UFC Warriors, and Myself is available now - https://amzn.to/3NEaAZu

Living near a busy road can increase your risk of premature death by a fifth, according to new research. Scientists from New York University say people exposed to above average levels of air pollution were 20% more likely to die over the next 14 years, mainly from cardiovascular disease. The study also shows that rates of heart attacks and stroke rose by 17% among those living near heavy traffic. The findings open the door to screening programs and preventive measures that could improve chances of survival.


Johnny Depp is rumored to be getting paid over $300 million to return to “Pirates Of The Caribbean,” after being unceremoniously dumped from the franchise in 2018 amid abuse allegations by ex Amber Heard. A source close to Disney allegedly dropped the bombshell in a new interview with Aussie outlet Poptopic. The 59-year-old played the swashbuckling buccaneer ‘Jack Sparrow’ in 5 “Pirates” movies over the last 15 years, before Disney dropped him from 6th and “final” installment in wake of Heard’s Washington Post op-ed that Depp claimed defamed him as a domestic abuser.

Everybody remembers the first time they got into a fender bender. For Ben Affleck’s 10-year-old son Samuel, it reportedly happened on Sunday in a car worth nearly a quarter of a million dollars. According to reports, Ben and fiancé Jennifer Lopez went with Samuel — whom Affleck shares with ex-wife Jennifer Garner — to a luxury car rental dealership in Los Angeles. At some point, Sam apparently got behind the wheel of a yellow Lamborghini which had the engine running. It’s unclear — even in photos of the incident — exactly what happened, but it seems Sam somehow backed the luxury vehicle into a white BMW. On the other hand, the luxury car rental lot claims no accident occurred and the cars were simply parked close together. A rep for Ben Affleck said “Everyone is fine”, but offered no further details on the incident.

You know how, when you were a kid, all the stories you read and sci-fi movies you saw promised that by now, we’d be getting around in flying cars? Well, we’re at least one step closer. Tomasz Patson, owner of the Swedish company “Jetson” (that’s right, ‘Jetson’!) has completed the ‘first ever’ commute in an $83,000 space-age flying car. He piloted the “Jetson ONE” vehicle from his Italian home to a company building in Tuscany. He called the trip to the workplace a “momentous occasion for the electric vertical take-off and landing (eVTOL) sector.” The Jetson ONE is powered by 8 electric motors, has a flight time of 20 minutes, and can reach a top speed of 63mph (102kph). The futuristic vehicle is constructed from a race car-inspired lightweight aluminium space frame and a Carbon-Kevlar composite body, and runs on a high-discharge lithium battery. Jetson has sold all of its production for 2022, and is taking orders for next year. The company says it is so easy to operate that they “can make anyone a pilot in less than 5 minutes. LINK: https://youtu.be/GAVwYIvmNEM

A simple way to avoid a cold is to carry your own pen. Pens are often needed at the bank, the doctor's office, the grocery store, the dentist, and elsewhere. Instead of using a pen that hundreds of others have touched, carry your own as a very simple way to cut down on germ exposure.

It takes food 7 seconds to travel from the mouth to the stomach.

A person’s sharpest memories are from early adulthood (our 20s).

About 163,000 pints of Guinness beer are wasted in facial hair each year.

Question: This causes people to panic about 3 times a month. What is it?

Answer: They feel like they have nothing to wear!

A man in Sweden with a gash in his leg got sick of waiting in the emergency room so he sewed it up on his own. And for his trouble, the hospital reported him to the police. The man told cops hospital staff had set out a needle and thread, so he decided to take the matter into his own hands.

THE TOP 20 HARDEST THINGS TO TRAIN A DOG TO DO, ACCORDING TO PET PARENTS:

1. How to walk with a lead, without pulling

4. How to behave when the doorbell rings

7. To be comfortable meeting other dogs

8. To be left alone at home for short periods of time

10. To listen to commands

13. To greet other dogs calmly or to not approach them

14. To be comfortable eating around others and not to steal food

15. To be comfortable meeting strangers

16. To sleep in their bed or crate

17. To stay calm at the sight of the postman

18. Travelling in the car or transport

20. To avoid being aggressive


"As a man in a relationship, you have a simple choice. You can either be right, or you can be happy." - Ralphie May

Text To Wrong Number Sends Act Of Kindness From Indiana To California
https://www.sunnyskyz.com/good-news/