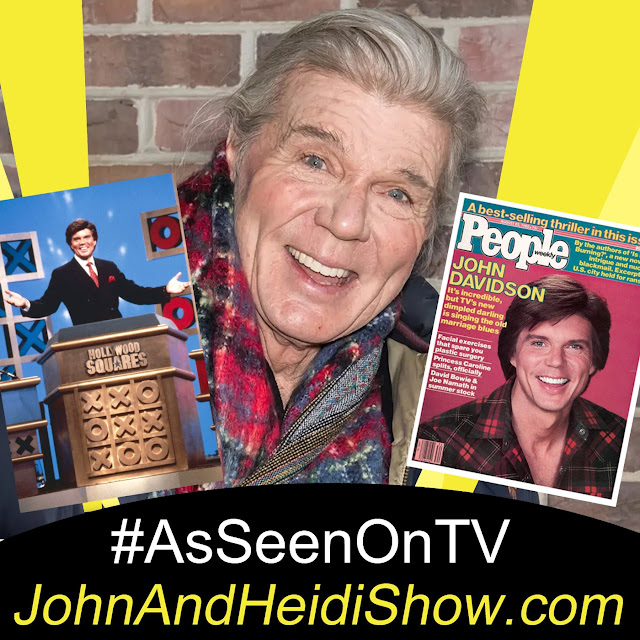 Today we visit with John Davidson. Host of Hollywood Squares and Thats; Incredible, plus many film and TV roles. He's now living in Sandwich, NH. He has a fun little club called CLUB SANDWICH and he hosts shows each week that can be watched online from anywhere in the world at JohnDavidson.com


According to a recent survey conducted by TopCashback.com, 65% of Americans are excited to attend weddings again. The survey polled a cross-section of 2,013 adults, aged 18 and over.

Do you believe in any of the following wedding superstitions? (select all that apply)

The betrothed couple cannot see each other the night before the wedding. (37 percent)

Rain on your wedding day is good luck. (19 percent)

Being “hangry” is a real thing, according to a new study. Researchers in Europe discovered that feeling hungry really does lead to more anger and irritability. Hangry, or the blending of the words hungry and angry (like they did in the Snickers commercials) — has become a popular expression in recent years, but this is the first study to examine how the phenomenon affects a person’s day-to-day emotional state. The study authors from Anglia Ruskin University and the Karl Landsteiner University of Health Sciences say they found that not only does hunger increase levels of anger and irritability, it also lowers a person’s level of pleasure. They also found that feeling hungry for just one day can actually leave a residual trace which impacts our emotions for weeks after.


Millie Bobby Brown has agreed to marry one of her “Stranger Things” co-stars if they’re both single at 40. She only just turned 18 a few months back, plus she’s in a relationship with Jake Bongiovi, son of rocker Jon Bon Jovi, but in a recent interview, Brown – who plays ‘Eleven’ in the hit Netflix series – appeared alongside 17-year-old Noah Schnapp – aka ‘Will Byers’ – and they opened up about their marriage pact. She told MTV News: “We said if we’re not married by 40, we’ll get married together because we’d be good roomies.” In addition to the requirement that both are single in 20+ years, Brown pointed out a few other important conditions: “Completely platonically, we would still be really good roomies. No kids, though, because I could not deal with a child of yours…and separate bedrooms, for sure – my God, you’re so messy.”


Admit it – roughly how many times per week do you find yourself saying how tired you are? Is the problem that we’re just going to bed too late? Actually, no. For most adults, the average time their head hits the pillow is 9:54 p.m. — and many say they still wake up feeling awful the next day! In a poll of 2,000 adults, 4 in 10 people described themselves as bad sleepers, and 60% admit their nighttime routine needs some work. Why, then, are we tossing and turning at night rather than sleeping soundly? Summertime may be one factor. Three in 10 adults say they can’t go to bed before 10 p.m. and more than half need it to be completely dark outside to fall asleep. Another 27% said they need to have all the doors locked before turning in and 1 in 5 need their room to be a certain temperature to fall asleep comfortably. One-third say they can’t fall asleep unless they brush their teeth first. And just one in 3 people call themselves a “good sleeper.”

More energy from the sun hits Earth every hour than the planet uses in a year.

The moon is gradually slowing Earth’s rotation, adding approximately 1.4 milliseconds to each day every 100 years.

Purdue University engineering students determined that it takes exactly 364 licks to get to the center of a Tootsie Pop.

Question: 23% of people top their pizza with this.

A Knoxville woman is in custody after abandoning a burning vehicle, damaging a guardrail, stripping to only a mask, tail and underwear and assaulting officers, a report from the Knoxville Police Department said. While on the scene, officers found an abandoned Pontiac Grand Prix that belonged to Marisa Ferrante, 23. Later on Monday, officers were dispatched to Sims Road due to a reported naked woman wearing a mask ringing doorbells. Officers reportedly then located a woman walking down Edington Road near Maryville Pike wearing only a mask, underwear and tail stopping traffic at the intersection. Officers tried to approach the woman, identified as Ferrante, but she ran on foot away from the officers, jumping a fence at a nearby house. Officers followed Ferrante, who then pretended to be defecating near a dog enclosure while talking to the dog in the enclosure, the report said. Ferrante then began eating grass from the lawn, according to the report. Officers managed to arrest Ferrante while she attempted to kick, punch and bite them, the report said. While in custody, Ferrante reportedly told officers that she was “called to abandon her car and go into the woods naked.” Ferrante was charged with indecent exposure, evading arrest, criminal trespass, resisting arrest, assault on a first responder, disorderly conduct, obstructing a highway, reckless endangerment, duty upon striking fixtures upon a highway and not providing an immediate notice of an accident. https://www.wvlt.tv/2021/09/22/knoxville-woman-custody-abandoning-burning-car-while-naked-police-say/

What’s brown and sticky? A stick.

Why do people say “break a leg” when you go on stage? Because every play has a cast.

What do you call a pig that does karate? A pork chop.

When do computers overheat? When they need to vent.

Where can you buy chicken broth in bulk? The stock market.


"Do things that make you happy within the confines of the legal system." - Ellen DeGeneres

10-Year-Old Brothers Save Dad From Drowning In Pool
https://www.sunnyskyz.com/good-news/