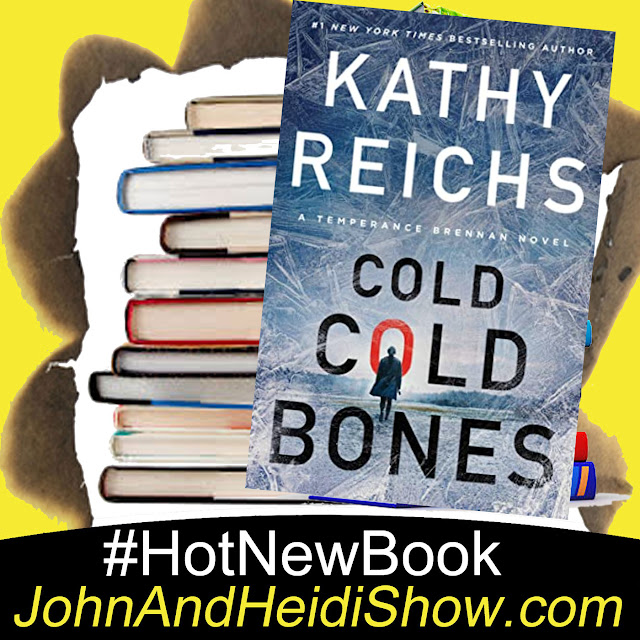 Today we visit with #1 New York Times bestselling thriller writer Kathy Reichs. She returns with her twenty-first novel of suspense featuring forensic anthropologist Temperance Brennan who, after receiving a box containing a human eyeball, uncovers a series of gruesome killings eerily reenacting the most shocking of her prior cases. AVAILABLE NOW https://amzn.to/3z0fbRG

What’s the first thing your kids do after school? New research says that children who play sports are happier and healthier than those who go straight to their screens. Scientists from the University of South Australia found that those who meet up with friends, practice sports, or take music lessons feel much better about themselves. They also found that kids who did other things, such as homework or reading, also experienced better well-being than those on screens. The team analyzed data from 62,000 students in 4th through 9th grade to see what they did between 3-6pm each day. They found that most students watched TV about 4 days a week and spent time on social media about 3 times a week.

If you feel safer with your dog around... this will make perfect sense to you. A new study from Ohio State University found that neighborhoods with higher dog ownership experience fewer crimes. In observing crime rates in various areas, they found that places with higher dog populations had lower rates of homicide, robbery and aggravated assault. These neighborhoods also had higher levels of trust among the residents. The study’s lead author says it doesn’t all come down to the fact that dogs can scare off potential evil-doers. Nicolo Pinchak says: “When people are out walking their dogs, they have conversations, they pet each other’s dogs. Sometimes they know the dog’s name and not even the owners’ [names]. They learn what’s going on and can spot potential problems.”

Johnny Depp has reached a tentative deal to resolve a suit from a “City of Lies” crewmember who says the actor assaulted him on set. According to a notice of settlement filed with court on Monday, Depp settled with location manager Greg “Rocky” Brooks in a deal that requires Depp to follow through with unspecified terms of the settlement by the end of August. The filing says when he does, “A request for dismissal will be filed no later than January 5, 2023.” Brooks sued in 2018, alleging that Depp screamed at him, punched him twice in the ribs and offered him $100,000 to hit back, during a drunken tirade. Brooks was allegedly fired from the production after he refused to promise that he would not sue over the incident.

Bridgerton’s Jonathan Bailey is about to join the cast of yet another period drama! The English actor has been making headlines for his portrayal of ‘Viscount Anthony Bridgerton’ in the Netflix period drama. In season 2, Anthony’s love story was the highlight, and while fans are definitely looking forward to seeing more from Anthony and ‘Kate’ in season 3, Bailey will also join Matt Bomer and Allison Williams in a limited Showtime series set in Washington D.C. in the 1950s called “Fellow Travelers.” In the 8-episode political thriller, Bailey’s character ‘Tim Laughlin’ is described as “an earnest Fordham University graduate brimming with idealism and religious faith.” Production begins this month in Toronto.

Last Wednesday was French Fry Day... this was posted online. People have been left thoroughly freaked out after a chef has shared how she transformed a McDonald’s meal into a gourmet pasta dish. Content creator Danny Kim recently challenged chef Amy Brandwein to create tortellini using fast food ingredients. She was given a Happy Meal (fries, chicken nuggets, sweet and sour sauce and 2 apple pies). The vid shows her blending flour, water, salt, milk and butter, before adding eggs to make a paste, and carrying on from there, finishing by plating the dish, adding chopped chives, fresh apple and crispy apple pie crumb. But as amazing as Amy’s skills are, TikTok users weren’t sold, with one writing: “Bro all that food turned into 3 pieces of pasta”. Another grimaced: “My inner Italian is raging.” LINK: https://tinyurl.com/2p8mtjcc

The filling in Kit Kats is made from damaged Kit Kats.

The use of the abbreviation “OMG” can be traced back to 1917.

The real “Top Gun” school (at Naval Air Station Fallon, Nevada) imposes a $5 fine on any staff member who quotes the movie.

Aerosmith made more money from “Guitar Hero” than from any of their albums.

Question: According to a survey, 1% of us are horrified at the thought of touching THIS. What is it?

Pringles wants a spider named after it. The chip manufacturer, owned by Kellogg’s, is petitioning the International Society for Arachnology to recognize the little-known Kidney Garden spider as the “Pringles Spider”. Why? The snack food maker says the arachnid bears an uncanny resemblance to its mustachioed logo. A press released says: “”In 1968 the world was introduced to the iconic Pringles can and logo, but little did we know there was a creature…who was unknowingly spreading the Pringles love.” An online petition began last week and has over 6,000. If it’s “officially recognized” Pringles said it will give away free cans to the first 1,500 signatories to celebrate the spider’s new name. LINK: https://www.pringles.com/us/pringles-spider.html

☞ Rosie O’ Donnell: Both she and Matthew Broderick hit 60 on March 21.


"Go to heaven for the climate, hell for the company." - Mark Twain