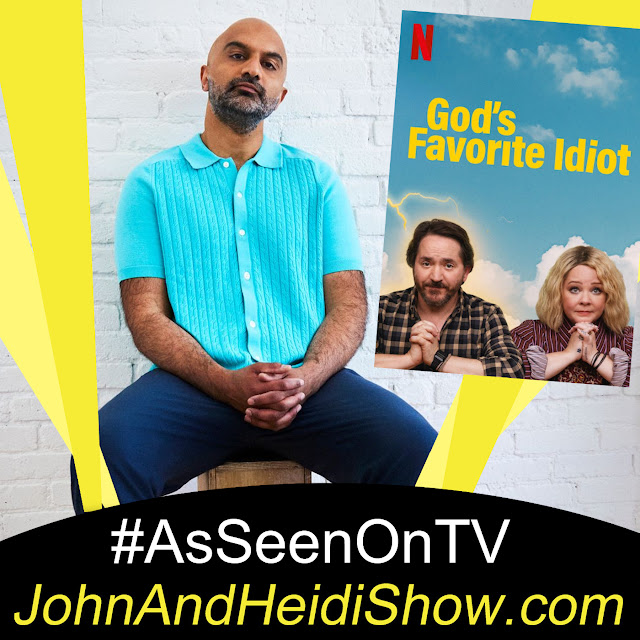 Today we visit with Usman Ally. He is featured in the new NETFLIX program Gods Favorite Idiot

A study of people with dogs revealed 30 per cent think the first two years of owning a pooch are the hardest, with 23 per cent admitting they had 'no idea' how much work went into training a puppy. As a result, 21 per cent were left with ruined carpets because of their disobedient pet – while one in four had to bid goodbye to their chewed slippers. Toilet training, not chewing the furniture and listening to demands such as 'SIT' were among the hardest things to train a new puppy on. And owners spend an average of 21 hours a month on training after bringing a puppy home – 43 minutes a day. But it takes an average of six months of training to get the basics sorted. The stats emerged in a study by pet health and insurance company Bought By Many which has seen a 87 per cent rise in behavioral issues between 2019 and 2021. Its figures also show that those with puppies aged under one are 62 per cent more likely to claim for a behavioral issue compared to just 16 per cent of owners who have dogs aged between one and two. Volumes of claims continue to drop significantly after the dog reaches three years old. The study also found that of the one in five owners who picked up their pups during lockdown, 78 per cent were convinced they would have more time on their hands for training. But seven in 10 found combining working from home, with training a dog, much trickier than they had anticipated. More than a fifth (22 per cent) of all owners have even taken their dog to a vet, trainer or specialized behaviorist to help control their pet. Owners estimate their dog has done damage worth £435 to their homes and personal belongings. Typically, puppies are a lot more accident-prone than adult dogs, with accidents claims at Bought By Many accounting for 22 per cent of puppy claims, but just 10 per cent of those for adult dogs.

DID YA KNOW!? Brought to you by RadioTravelGroup.com
Canada will require that companies add warnings to the front of pre-packaged food with high levels of saturated fat, sugar or sodium, starting in 2026. Health Canada says the labels are meant to help consumers make healthier choices, as those nutrients have been linked to conditions such as obesity, stroke, heart disease, type 2 diabetes, high blood pressure, and certain types of cancer. The new labels will complement, rather than replace, the more detailed nutrition information that’s typically on the back of food packaging.

Kelsey Grammer is teasing the long-awaited “Frasier” revival could begin shooting this fall. ViacomCBS officially greenlit the Paramount+ series last February. In an appearance on “The Talk” yesterday, Grammer said: “There were some conversations about (shooting in) October, maybe a little later. There are a couple of other things coming up.” Grammer confirmed they’re “in the final stages of the final script for the first episode of the Frasier reboot and it looks pretty good…I’ve had a couple of runs through it, and I cried, so you know, I’m happy.” He played ‘Dr. Frasier Crane on the original series, which ran from 1993-2004. No word on when the reboot might premiere.

Woody Allen may be one of the most prolific directors of modern times, but he’s almost ready to hang up his hat. The 86-year-old “Annie Hall” filmmaker appeared in a rare interview on an Instagram Live session with Alec Baldwin. In the conversation, the embattled Allen admitted that his next film will probably be his last and said that he wants to retire from directing in the very near future. Quote: “I’ll probably make at least one more movie. A lot of the thrill is gone.” He went on to note that he has become disillusioned by 21st-century moviemaking, especially with the multitude of streaming services. The Oscar winner’s next project is set to shoot in Paris later this year.

In order to save the environment, and our health, a new study argues that people should give up all the sweet and fried foods they love so much. Researchers in Australia and New Zealand conclude that the production of unhealthy foods (or junk food) has a negative effect on the Earth’s ecology as well as an eater’s health. The team found sweets, pastries, processed meat, and fatty foods are all bad for the environment. They looked at 20 studies on the environmental impact of food consumption in Australia and New Zealand, finding that unhealthier foods produce more greenhouse gasses.

What’s one of the first things you see when you walk into your friendly-neighborhood grocery store? It’s such a common sight, that you might not even consciously notice it anymore, but most likely, you’ll see flowers. Big, bright bouquets of fresh-cut blooms. That’s no coincidence, according to Paco Underhill, founder and CEO of behavioral research and consulting firm Envirosell. He says: “If you can get someone’s nose and saliva glands working, they become a much less disciplined shopper.” Sure, flowers are pretty, and the store can make money by selling them, but they also fire up the senses, which gets you ready to spend. And as you get closer, your nose picks up on their aroma, signalling freshness and telling your brain “This place has good stuff.” Psychologically, your brain says: “If this store can manage fresh flowers and sell them, it isn’t going to sell me stale food.” According to Underhill, that’s one way stores indirectly influence your behavior and encourage you to part more readily with your money. Holiday music is another effective strategy. Psychologists call the effect “misattribution” — you’re in a good mood and ready to shell out for the holiday season, not fully realizing that it’s because of the music and twinkly lights.

Canadians say “sorry” so much that The Apology Act was passed in 2009, declaring that an apology can’t be used as legal evidence of admission of guilt.

If a man’s tie is too tight, his vision gets worse.

Worker performance declines by about 1% for each degree that an office temperature varies (hotter or colder) from 22C (72F).

Question: 8 out of 10 married people say they can’t trust their spouse to do THIS. What is it?

Answer: Wake them up in the morning

Things are tough all over. How tough? Some stores are considering the unthinkable: paying you to keep the items you planned to return. What, now? Bear with me, it starts to (sort of) make sense. In recent weeks, some of the biggest US store chains, including Target, Walmart, Gap, and American Eagle have reported that they have too much inventory, ranging from workout clothes to spring jackets and hoodies to garden furniture and kids’ toys – and it’s costing them tons of money to store it. And returned merchandise, only adds to the storage problem. So stores are considering just handing customers their money back and letting them hang onto the stuff they don’t want. How does that work? In cases where a company determines that the item a customer is returning would cost them more to store, restock, or refurbish, they would advise the customer to just keep or donate their return, and still give them their money back. Reportedly some companies are “100% considering” the “Keep it” returns policy for later this year.

Shoresy (streams Crave) is diabolically funny. The spinoff from Letterkenny has the famously foul-mouthed, chirping Shoresy (Jared Keeso), who claims intimacy with the mothers of all his teammates, join a senior Triple A hockey team in Sudbury, Ont. It is bonkers, but a beautiful thing. Full of salty Canadian vernacular, and hockey-centric.

Slow Horses (streams AppleTV+) is a new twist on the traditional Le Carre-style espionage. Based on the novel by Mick Herron, it features one of the great dilapidated spies: Jackson Lamb, a man so burnt out, seedy and cynical he’s a perambulating half-century of jaundiced espionage experience (played with exquisite relish by Gary Oldman). A sublimely droll thriller with comic bite too.

Pachinko (streams Apple TV+) is visually breathtaking and epic in almost every department, but intimate in focus. It’s based on Min Jin Lee’s novel, but not adhering tightly to it. The story weaves and bobs from Korea in 1915, occupied by Japan, over decades to the near-present of 1989 when Solomon Baek (Jin Ha) arrives in Japan from the U.S. to secure a financial deal and a promotion. His determination is inherited from his grandmother Sunja, who we first meet as an intense, tough-as-nails eight-year-old (played with astonishing gravity by Jeon Yu-na), when she’s living with her family on a small fishing island. A masterpiece of unhurried family drama.

Conversations With Friends (streams Amazon prime Video) is an adaptation of Sally Rooney’s first novel by the same Irish and BBC/Hulu team that made Normal People. The series asks the same question as the novel: What do you do with desires and impulses you don’t understand? That’s the situation of Frances (Alison Oliver, in her first TV or film role) a 21-year-old, soon-to-finish university student, who begins an affair with a married man. It is so slow burning that the delicacy of it is exquisite.

We Own This City (streams Crave) is a dirty-cop narrative from David Simon working with long-time collaborator George Pelacanos. It’s an unfussy, powerful dramatization of a true story – how an elite plainclothes unit within the Baltimore Police Department became corrupt. The leader of the group for years was Sergeant Wayne Jenkins (Jon Bernthal), a guy who went from straight-arrow beat cop to the embodiment of sleaze. As Jenkins, Bernthal is formidably compelling in a very physical, demanding performance.

The Staircase (streams Crave) is a dramatization of the case of Kathleen Peterson (Toni Collette) who was found dead at the bottom of the stairs in her home in 200. Her husband, novelist Michael Peterson (Colin Firth) was the suspect from the get-go. Oscar-winning French director Jean-Xavier de Lestrade made a classic documentary series about the case but if you think you know the story, think again. It’s a mystery and legal case so bewildering and thorny it continues to fascinate and commands yet another bout of scrutiny.

"If you can't be kind, at least be vague." - Judith Martin

Social media was furious on behalf of Kevin Ford, a food service employee, who recently posted an Instagram ‘video unwrapping’ of a thank you gift he received for 27 years of perfect attendance on the job. Underwhelmed by seeing that the dedicated employee received just a reusable Starbucks cup, candy, a pen, and a single movie ticket, they decided to give Ford their own gift for his exemplary service. In just over a week, his daughter’s online call for appreciation of a good man who works at the Burger King at Las Vegas McCarren International Airport amassed $270,000, including $5,000 from comedian David Spade. He has also received a number of job offers. LINK: https://www.instagram.com/p/Cd-JQvvu2tu/