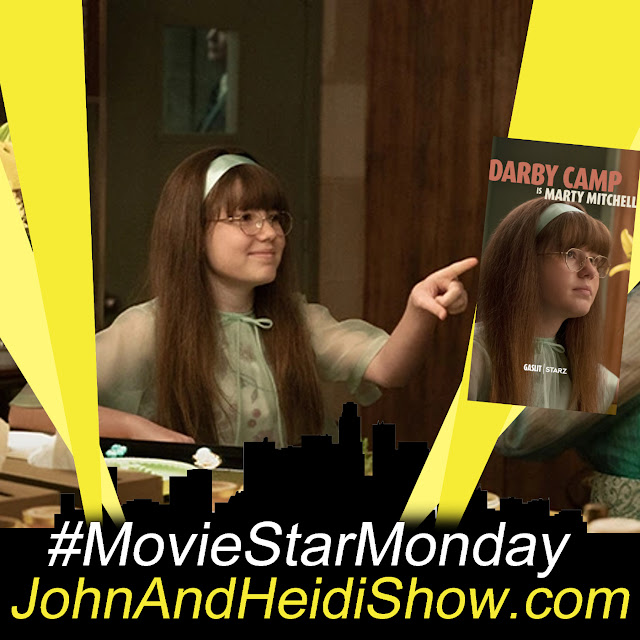 This #MovieStarMonday we visit with Darby Camp about her new project Gaslit with Sean Penn & Julia Roberts.

We’ve heard recently that many people report they’ve been invited to more weddings set for this summer than any in recent memory. Well, if you’re one of them, you’d better keep a few weekends free – to see family. According to a poll of 2,000 American adults who plan on traveling this summer, 57% expect to attend a family or friend reunion this summer. The average respondent says they have waited about 4 years to reconnect with their extended family, so it’s no surprise that over half (58%) are willing to travel further this summer than ever before, in order to reconnect with friends or family. Conducted by OnePoll on behalf of Motel 6, results show that the average person is willing to travel nearly 80 miles (130km), but about one-third (32%) would venture more than 100 miles (160km).

Adding salt to your meals at the table can take years off your life, according to a study of 500,000 middle-aged Britons. Researchers found that always adding salt to food decreases life expectancy of men by more than 2 years, and by 1½ half years for women. This does not include seasoning during the cooking process.

There’s a good chance that fans won’t have to wait another 36 years for the next “Top Gun” sequel. Miles Teller has told “Entertainment Tonight” that Tom Cruise is already in talks about doing a third film following the huge success of “Top Gun: Maverick”. Teller, who plays pilot ‘Lt. Bradley “Rooster” Bradshaw’ in Maverick, said he has been having “conversations” with Cruise about appearing in another Top Gun flick. As of July 10, Top Gun: Maverick has grossed around $1.18 billion worldwide, making it the highest-earning film of the year.

Tom Cruise is the movie star of the year, thanks to the billion-dollar grossing success of “Top Gun: Maverick,” but at least one Oscar nominee is not impressed. Mickey Rourke recently appeared on “Piers Morgan Uncensored” and slammed Cruise as “irrelevant.” Regarding the new movie’s success, Rourke said: “That doesn’t mean (you know what) to me. [Tom Cruise has] been doing the same part for 35 effing years. I got no respect for that…I care about…when I watch Al Pacino or Christopher Walken working, or De Niro’s early work and Richard Harris and Ray Winstone, that’s the kind of actor I want to be like. A lot of guys that tried to stretch as actors.” When asked if Tom Cruise is a good actor, Rourke fired back: “I think he’s irrelevant.” LINK: https://tinyurl.com/3zufe987

Dwayne Johnson will be the Master of Ceremonies for Shark Week. On Instagram, The Rock told followers to get ready for the “BIGGEST WEEK OF TV.” He said that he’s “honored” to be the first-ever MC for Discovery’s annual Shark Week event. The Hawaii native revealed that he filmed his footage exclusively in his home state, where “these beautiful predators…are deeply revered & respected in our Polynesian culture.” The “Jumanji: Welcome to the Jungle” actor also pointed out the details of his tattoo, where he explains that “shark teeth are throughout to protect my ancestors and our MANA.” Shark Week runs July 24-30.

A buffalo helped a turtle by flipping it over, and the video has gone viral.

A survey found more people would give up sex than coffee.

Yes, there are scientists the world over exploring strategies to mitigate the damage from climate change. Some ideas—like blocking out the sun—may seem unrealistic, but there are some less-drastic strategies that have potential. And it turns out, based on new research, beer could play a significant role in combatting climate change—with a little help from…cows. The cattle industry is responsible for about 40% of the world’s annual methane output, courtesy of the gas emitted by the 1.4 billion bovines who spent a good amount of time burping and passing gas. Scientists say that through selective breeding and diet changes, those contributions could be reduced – and there’s one key ingredient in the brewing process that could make a big difference if added to their feed. That’s right — according to a study recently published in Frontiers in Animal Science, the leftover yeast used to make beer shows great potential in suppressing the microbes responsible for methane production in cattle, to the tune of about 25% less emissions. It’s not a magical fix for all that “ales” the planet, but it certainly sounds promising.

A snail has 2 pairs of antennae: 1 for seeing, 1 for smelling.

The color orange was named after the fruit, not the other way around.

Mozart wrote the melody of ‘Twinkle Twinkle Little Star’ at the age of 5.

Dandelions are loaded with vitamins A, C, and K—not to mention calcium, iron, and potassium.

Ketchup used to be considered a medicine.

Question: One in 5 people have THIS on them at all times. What is it?

An ice cream truck is serving up a dish best served cold — by selling popsicles modeled after famous billionaires. NSCHF, a Brooklyn, NY art collective, is taking its truck around the city, and selling their “Eat the Rich” billionaire popsicles. This week, overheated consumers can bite into ice pops shaped like Elon Musk, Jeff Bezos, Mark Zuckerberg, Bill Gates and Alibaba co-founder Jack Ma. The truck is plastered with sayings like “Gobble Gates” and “Suck Zuck”. The art collective says it’s all about creating commentary for various things in our culture, and that the $10 price tag for a single popsicle is just 1 of the many ways they’re making a statement about their frozen billionaires. LINK: https://tinyurl.com/juz9fupw

☞ Complimenting someone’s new look: Reacting to a person’s drastic change to their appearance, such as weight loss, is a delicate business. Saying something like “I can’t believe how great you look!” implies the person didn’t look good before.

☞ Asking “How’s it going?” at a funeral: At a funeral, you need to remember to take the cheerfulness down a notch.

☞ Offering unsolicited advice: If a friend confides in you, sometimes it’s best just to listen. However good your intentions, giving your opinion without being asked can rub people the wrong way.

☞ Saying “I’ll call you”: To avoid awkwardness at the end of a first date, some people say this to be “polite,” but it’s best not to say it if you don’t mean it.

☞ Congratulating a stranger on their pregnancy: Never assume a woman is pregnant, and ask: “How far along are you?”

☞ Asking someone why they’re still single: “I don’t understand how a good-looking girl/guy like you can still be single.” Definitely not a nice thing to say.

☞ Offering someone your seat on the bus: Sometimes, it’s the right thing to do. Other times? The passenger who is standing might take the offer as a statement that they look old or frail.

☞ Not correcting someone who gets your name wrong: Out of politeness, you let it slide. Before you know it, she’s made this mistake 4 times. Then a fifth time. Now, it’s hard to fix things without embarrassing her.