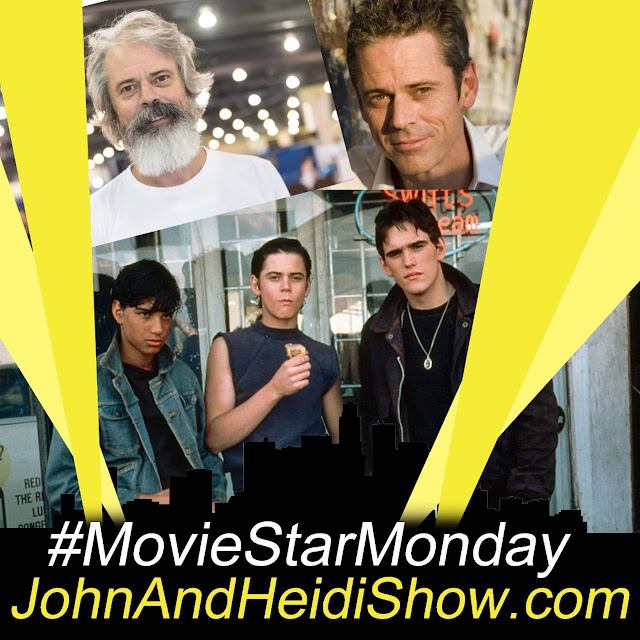 This #MovieStarMonday we visit with C. Thomas Howell (ET, The Outsiders, Gettysburg, Soul Man, Woodlawn & many more) We will visit with him about his many movies and his new music career! https://tommyhowellmusic.com/

Summer is officially here and you might be spending more time outside and in the yard, but that's not always a good thing considering 53% of Americans say they have an annoying neighbor! Love thy neighbor? 53% of Americans say they don’t! Whether you share a wall, a fence, or live across the street, a new nationwide study is breaking down the biggest frustrations with our neighbors:
-70% talk to neighbors…but 45% don’t want to!
-62% have confronted a neighbor over their behavior, whether it’s leaving a note, arguing face-to-face, or leaving it to their spouse
-Top 5 biggest annoyances: noise, not cleaning up after pets, being intrusive/nosy, parking issues, unsupervised children
-When it comes to noise, what type of complaints are most common? The top five are loud music, loud adults talking/shouting, loud pets, and loud children.

A new study shows that over a 10-year period, women packed on significantly more pounds than men. Brigham Young University scientists tracked nearly 1,400 American adults for a decade. More than half saw their body weight increase by at least 5%, while over a third gained 10 % or more body weight. Women gained an average of about 12 pounds (5.4kg), while men gained an average of about 6 pounds (2.7kg) during the same time frame. Going by age, young adults were likely to put on the most weight, averaging a 17.6 pound (8kg) increase between ages 20 and 30.


Tom Cruise has earned the biggest box office achievement of his 4-decade career, thanks to “Top Gun: Maverick” — a $1 billion grossing film. The movie’s global box office takings now total $1.006bn (£813m) after 31 days of release. Industry estimates say the movie crossed $1 billion worldwide on Sunday after it grossed $30.5 million domestic and $44.5 million in overseas markets. That brings its estimated total to $521 million domestic and $484 million international, putting it just past $1 billion globally. In doing so, it also passes “Doctor Strange in the Multiverse of Madness” as the highest grossing film of the year.

Over 380 million tons of plastic is produced each year, according to recent figures. Approximately 35.7 million tons is used by the U.S. alone, most of which consists of plastic bags. The majority of plastic bags are used for approximately 12 minutes and it takes at least 500 years for one to degrade in a landfill. In addition to plastic, cotton also has a large ecological footprint as 4% of all world pesticides are used in its cultivation. Researchers at the Massachusetts Institute of Technology hoping to combat both issues have developed an ingenious solution to turn plastic bags, wraps and other supermarket waste into textiles.

Sportswear, shoes, army uniforms and perhaps even spacesuits can be formed from fabric created out of plastic bags, scientists say. The eco-friendly, recycling textile could revolutionize fashion as it resists dirt and can be washed on a cold cycle in just 10 minutes. The team of engineers found a way to spin polyethylene into fibers and yarn first made from spaghetti strings and weaved in a way that would allow it to absorb water and sweat. The researchers modeled the yarn by testing the wicking ability over cotton, nylon and polyester by dipping strips in water and measuring the time it took for the liquid to climb up each strip. The plastic yarn wicked away and evaporated the water faster than other common textiles.

A study found that puppies reach “peak cuteness” at 6-8 weeks of age, depending on breed.

Eating spicy foods can cool you down on a hot day.

Jogging is considered running when it exceeds a speed of 6mph (9.7kph).

Question: THIS food is thrown away more often than any other. What is it?

Cheese-lovers can now wear their favorite dairy product on their fingertips, thanks to Velveeta cheese and British nail polish brand Nails Inc. A limited-edition set of 2 cheese-scented polishes are going for $15 on the Nails Inc. website. It includes 2 shades: “Finger Food,” a bright red, and “La Dolce Velveeta,” a creamy yellow color. The polishes’ signature cheesy scent only appears when they are dry.

What do you call an alligator detective? An investi-gator.

Why did the scarecrow win an award? Because he was outstanding in his field.

What lights up a soccer stadium? A soccer match.

Why shouldn’t you write with a broken pencil? Because it’s pointless.

What’s the difference between the bird flu and the swine flu? One requires tweetment and the other an oinkment.

"The best way to get most husbands to do something is to suggest that perhaps they're too old to do it." - Shirley MacLaine

For The First Time Ever, There Are No Girls Incarcerated At Hawaii Youth Correctional Facility
https://www.sunnyskyz.com/good-news