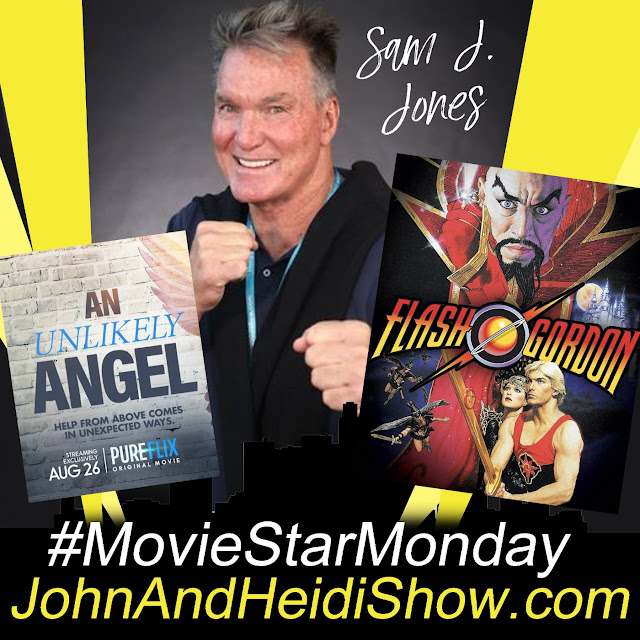 This #MovieStarMonday we visit with Sam J. Jones (Flash Gordon) about a new film he's in right now on PureFlix. An Unlikely Angel premiered on Friday, August 26th - https://www.pureflix.com/movie/an-unlikely-angel

According to Hoyle Day

The answer to getting bigger muscles could be “quantity over quality”. A new study found that just a little bit of exercise each day is better for the body than one intense workout session. Researchers from Australia and Japan found that just doing a handful of bicep curls each day, 5 days a week actually improves muscle strength more than continuously doing dozens of curls in a longer exercise routine once a week. And even better, they found people don’t even have to work out at full intensity to achieve these results. The scientists say that their research shows that it only takes a very manageable amount of exercise on a regular basis to produce noticeable improvements in strength.

Because of drought conditions in California, the largest district in the state is paying residents $2 per square foot to rip up their lawns. And cities within Metropolitan Water District have the option of adding more cash incentives. Bill McDonnell, senior resource specialist with the water district, which services 19 million customers, envisions a future when a residential lawn is what he calls “abnormal” in Southern California. He says that 70% of water use in his area goes to outdoor irrigation, led by lawns.

Thirty-six years after its release, “Ferris Bueller’s Day Off” is getting a spinoff. The new film, titled “Sam and Victor’s Day Off” will follow the valets who took Cameron’s dad’s Ferrari on a joyride the same day ‘Ferris’, ‘Cameron’ and ‘Sloane’ skipped school in the original movie. ‘Sam’ and ‘Victor’, who were left unnamed in the original movie, were played by Richard Edson and Larry “Flash” Jenkins, who died in 2019. The new film is being led by Jon Hurwtiz, Hayden Schlossberg, and Josh Heald, who created “Cobra Kai”, the successful spinoff series of 1984’s “Karate Kid”.

Disney+ has released the first trailer for “Dancing With the Stars” jump to the streaming platform, highlighting the most unforgettable moments from the show’s first 30 seasons. The upcoming 31st season starts Sept. 19. The preview focuses on some of the most famous stars to appear on the show in recent years, including James Van Der Beek, Bindi Irwin, and JoJo Siwa. There is also footage of Alfonso Ribeiro taking the ballroom floor during his successful mirror ball trophy campaign in Season 19. Ribeiro will co-host this season with Tyra Banks. Len Goodman, Carrie Ann Inaba, Bruno Tonioli, and Derek Hough are back at the judge’s table. Disney also announced plans to release “Dancing with the Stars: The Pros’ Most Memorable Dances” on Sept. 8 to mark Disney+ Day. LINK: https://youtu.be/6FGorrWaQEg

Deep down, you already knew this, but researchers in Japan say they’ve found that your dog can cry tears of joy when you come home after work. For the study, academics at Azabu University and Jichi Medical University placed strips of paper under the eyes of the dogs during normal interaction with their owners, and again a minute before they were reunited with them after 5-7 hours of separation. They discovered when the dogs saw their owners, it was the only time they shed tears. There was not the same level of increased tear production when the dogs were reunited with other people they were familiar with, but were not their owners. Next, to see whether the tears are linked to dogs’ emotions, the researchers applied a solution containing oxytocin, a key hormone involved in bonding, to the dogs. After they used the hormone, they found the dogs’ tears significantly increased. It is believed that dogs may have evolved to produce tears so humans would better care for them, and as a way of deepening the bond with their owners.

There are more Lego minifigures than there are people on Earth.

Elvis Presley was originally blonde. He started coloring his hair black for an edgier look.

Question: 10% of married couples met their spouse HERE. Where is it?

McDonald’s is joining the chicken sandwich wars in a big way. A Big Mac way. The fast-food chain has announced plans to test-market its Chicken Big Mac at select Miami restaurants. Each sandwich combines 2 crispy chicken patties, a slice of cheese, shredded lettuce, pickles and the iconic Big Mac sauce. Earlier this year, customers in the UK got the first taste of the double-decker sandwich. Praise piled up across the pond for the limited-edition item, which sold out in 10 days. McDonald’s will begin testing the chicken Big Mac in Florida beginning later this month.

Here are the top-10 habits that people want to kick, according to a survey of Americans…

3. Sedentary behavior: 80% of adults don’t get the recommended amount of exercise, and 70% want to get into better shape.

6. Staying up late: 33% don’t get enough sleep, 74% of those people who are over 30 say sleepiness affects their work.

7. Watching too much TV: Americans watch 5 hours of TV per day, on average.

8. Overusing smartphones: 36% say they are constantly checking or using their phone.

9. Nail biting: 45% of teens chew them regularly, and up to 30% of Americans chronically chew ‘em.


The difference between stupidity and genius is that genius has its limits. - Albert Einstein