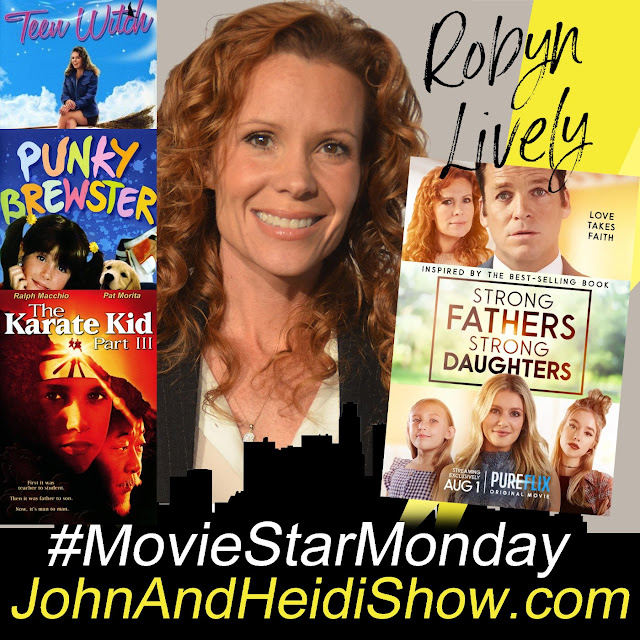 This #MovieStarMonday we visit with Robyn Lively, a child actress in the 80s in “Silver Spoons” and “Punky Brewster”, she has over 80 credits that includes “The Karate Kid III”, “Twin Peaks,” “Doogie Howser, M.D.”, “JAG” and many more. She is also the half-sister to actress BLAKE LIVELY.

The film is inspired by the best-selling book “Strong Fathers, Strong Daughters,” by Dr. Meg Meeker. Being a parent is one of life's greatest callings, but that responsibility can be overwhelming. Steve loves all three of his daughters – but does he really know who they are? Discover the heartfelt journey of a dad who is desperately trying to hold onto his little girls but learns he must give up control and have faith with their future. www.pureflix.com/movie/strong-fathers-strong-daughters

A survey of 2,000 people found that 3 in 4 of us won’t judge you for licking your fingers after eating chicken wings – because they do the same thing. When presented with a plate of chicken wings, a third of Americans will reach for a drumette first – but a quarter of us would prefer a flat wing. 42% are just as happy with either – or both. And although 44% consider boneless wings as actual wings, 38% would tease someone for ordering them instead of bone-in wings. Respondents said the best chicken wings are deep-fried (55%) or grilled (51%) and tossed in barbecue sauce (39%), ranch seasoning (34%) or hot buffalo sauce (33%).

According to the old saying, “Revenge is a dish best served cold”, but it seems most people prefer to strike right away, according to a study. Despite the Hollywood depiction of people savoring sweet revenge after months or years of plotting, a team from Virginia Commonwealth University found that 58% of us would prefer to take immediate revenge, even if it means dealing a lesser blow to an enemy. The study also found that most of the 1,500 people surveyed would prefer quick revenge even over receiving money.

Dame Shirley Bassey is set to perform at a charity concert at London’s Royal Albert Hall to celebrate 60 years of James Bond. The 85-year-old Welsh music legend holds the record for the most 007 theme tunes, having performed 1965’s “Goldfinger”, 1971’s “Diamonds Are Forever” and 1979’s “Moonraker”. And on October 4, she’ll headline “The Sound of 007”, showcasing the iconic music of Bond. Also performing are the Shirley Manson-fronted rock band Garbage, who performed ‘The World Is Not Enough’ for Pierce Brosnan’s 1999 Bond flick, and special guest ‘Stop This Flame’ hitmaker, Celeste. The performers will be backed by Royal Philharmonic Concert Orchestra as they put their spin on famous Bond themes, to commemorate the world premiere of the first Bond movie, “Dr. No” in 1962. More artists and charity info will be announced later.

City life is making animals fatter, according to new research. As urbanization causes many animals to lose their natural habitats and end up running through local neighborhoods, a study has found that although scientists have long believed that this process ends up making animals smaller, it’s actually leading to larger and more hefty critters roaming through your trash. A team from the Florida Museum of Natural History examined the body length and weight of more than 140,000 animals from over 100 North American species which pop up in cities, including wolves, bobcats, deer, bats, shrews, and rodents, and found they are getting bigger and fatter than their rural relatives, thanks to the fact that there is more food in the area.

Mayim Bialik and Ken Jennings have officially been signed on to continue hosting “Jeopardy!” moving forward, executive producer Michael Davies has announced. On top of that, Davies announced a slew of new programming that will expand the “Jeopardy!” franchise. Jennings will kick off the season in September, host the inaugural “Second Chance” competition, and the heavily anticipated “Tournament of Champions” featuring Amy Schneider, Matt Amodio, Mattea Roach, Ryan Long and more. In the meantime, Bialik will host “Celebrity Jeopardy!” on ABC in primetime. When she takes over from Jennings in January, the plan is to have her host a few new tournaments, plus the “Jeopardy! National College Championship” – and as many weeks as she can manage while keeping her other primetime commitment to “Call Me Kat.”

Roman statues were often made with heads that could be removed and replaced with other heads.

The opposite of “cross-eyed” is “wall-eyed”.

Question: In a survey where women were asked what item they wish their partner didn’t own, THIS came in at #1. What is it?

Polish construction firm Budimex and refiner Lotos have created a floral-scented asphalt. Why? According to the companies, it’s not to improve conditions for people living in large cities without ready access to nature. And it’s not for the sensory enjoyment of commuters who must spent hours fighting traffic every day to get to work. It’s to improve working conditions for road builders. The new bitumen contains a mixture of natural and synthetic essential oils, most of which neutralize the typical smell of asphalt, while the remaining ones add a more pleasing scent. A foreman was quoted by the companies as saying that at times, he can detect the scent of flowers, which made “working more pleasant”.

Is your butter rock hard from the fridge but you're too hungry to wait, then just use a grater to grate the butter into shredded pieces. The butter will soften considerably faster.

When you want to enjoy a bottle of cold beer but don't have the time or patience to wait, wrap your beer bottle in a couple of wet paper towels and put it in the freezer for 8 - 15 minutes.

Want fresh meat at McDonald’s or Wendy’s or any other burger chain? Ask for a burger with no seasoning and they’ll make you a fresh one.

If you have an important date or job interview coming up tomorrow and an annoying pimple appears out of nowhere don’t panic. Put toothpaste on it and it will disappear overnight.

"There is no such thing as fun for the whole family." - Jerry Seinfeld