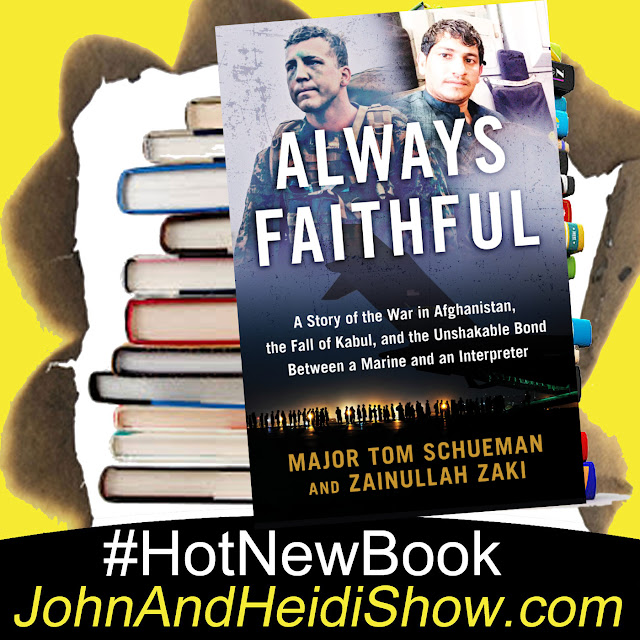 Major Tom Schueman “ALWAYS FAITHFUL: A Story of the War in Afghanistan, the Fall of Kabul, and the Unshakable Bond Between a Marine and an Interpreter” by Major Tom Schueman and Zainullah Zaki, a heartfelt dual memoir told by two men from opposite worlds. AVAILABLE NOW: https://amzn.to/3B7Lb7i


Supposedly, you should never keep a secret from your partner, but a surprising new bit of research says that hiding a few small purchases from your significant other may actually benefit the relationship. The research team, including scientists from a number of American universities, found that guilt stemming from “secret consumer behavior” often prompts people to invest more in their relationship to compensate. While they definitely aren’t suggesting you go out and secretly buy a new car or timeshare condo, it may not be a bad idea to have a stash of candy hidden away, or order up a few new items for your fall wardrobe if you notice they are on sale. The researchers found that 90% of people have recently kept some consumer behaviors a secret from someone close to them — like a friend or spouse. The most common secretly purchased products? Food or drink (40%), followed by clothing, jewelry, or a hobby (10%), a gift or donation (8%), and a health, beauty, or wellness product (6.3%).

Arizona State University recently announced the name of the new multi-purpose facility that will temporarily host the NHL’s Phoenix Coyotes, and it sounds like the type of place that could host a real party – in the back. The “Mullett Arena” is named in recognition of Donald and Barbara Mullett, who have been strong advocates for the growth of hockey in the state. The Coyotes are set to play their first game at Mullett Arena on October 28, when they host the Winnipeg Jets.

J.K. Rowling is finally breaking her silence on why she didn’t appear on the HBO Max special “Harry Potter 20th Anniversary: Return to Hogwarts”. The author of the books that spawned the successful movies revealed that her absence from the reunion was simply because it was not something she wanted to do. She told Graham Norton on his UK radio show that she was not excluded from the reunion, saying: “I was asked to be on that and I decided I didn’t want to do it. I thought it was about the films more than the book, quite rightly, that was what the anniversary was about.” The HBO Max special premiered on January 1 and it featured all of the key players that made the Harry Potter movies a success.

Shia LaBeouf is addressing the allegations of abuse that have been levelled against him by his ex FKA Twigs, seemingly acknowledging that her accusations are true. The scandal-plagued actor appeared on the podcast “Real Ones,” saying: “I hurt that woman,” without addressing the singer-songwriter by name. He also admitted that he “hurt many other people”, calling himself “a pleasure-seeking, selfish, self-centred, dishonest, inconsiderate, fearful human being.” LaBeouf claims to have turned over a new leaf after embracing Catholicism.


Dog owners tend to take bigger risks and respond more to reward-oriented advertisements. Cat owners, on the other hand, are more cautious and more likely to react to ads emphasizing risk aversion, according to a study. The research, published in the Journal of Marketing, determined that these effects occur because people form mental associations of pets’ stereotypical temperaments and personalities. As a result, upon exposure to dogs or cats, these associations rise to the top of the mind and influence people’s decisions and behaviors.

Many dog owners like to leave the radio on when they leave home, in hopes it soothes Fido, and helps to keep him company. But a new study has found that dogs may prefer silent treatment. In a study by the Animal Behaviour Centre at Queen’s University in Belfast, 60 dogs were isolated in a room on their own for 30 minutes. They were either left in silence; with Mozart music playing, or an audiobook of “Harry Potter and the Philosopher’s Stone”. Analysis of the dogs’ behaviour found very little evidence to suggest either audio made a difference, with Mozart performing marginally better than Potter’s exploits at Hogwarts. The study’s authors concluded: “Auditory stimulation in the form of either classical music or audiobooks harbours little welfare advantage in situations where dogs are separated from their owners…and it is “possible” dogs may benefit more from peace and quiet than listening to an audiobook or Mozart.”

A backward question mark ( ⸮ ) is an accepted punctuation mark used to signify irony or sarcasm.

Scientists have determined that 4 seconds is the perfect length of time to dunk an Oreo in milk.

It’s estimated that the common housefly can have as many as half a billion bacteria on its body.

When cut in half, a hailstone has rings like an onion.

Lettuce is a member of the sunflower family.

Question: Stats show that THIS food is eaten outside of the home 80% of the time. What is it?

A Tesla owner will never lose his keys again — after spending $400 to have them permanently implanted in his hand. Brandon Dalaly of Detroit shared a video showing him having a chip implanted in his right hand, then using the device to unlock his vehicle, with just the wave of a hand. The implanted chip can also start the car from the inside. He says that now, he uses it as his key when his Bluetooth key fails, or he doesn’t have his key card. Dalaly, a self-described tech nerd, isn’t new to getting microchip implants for the sake of convenience. In his other hand is a chip that can unlock the front door to his house. It also stores his medical info, like his COVID-19 vaccinations. LINK: https://tinyurl.com/2cwsu7wt

Check out the 10 best (and 10 worst) cities for fighting against the undead below, followed by some highlights and lowlights from our report. (Click here to see where your city ranks and for surprising findings.)

Most Prepared for Zombie Invasion

Woman Is Overwhelmed By The Kindness Of Strangers During Search For Lost Wedding Ring https://www.sunnyskyz.com/good-news