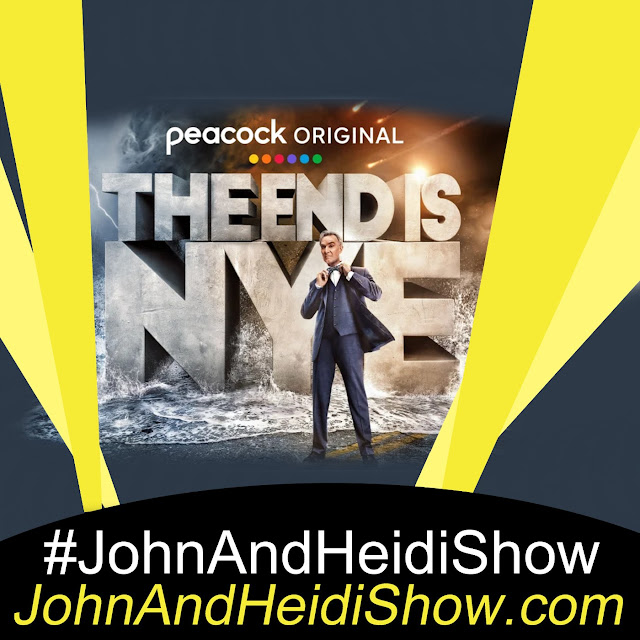 This weekend we visit with Brannon Braga, television producer, director and screenwriter. Brannon is a writer, producer and creator, serving as such on the spin-off television series Star Trek: The Next Generation, Star Trek: Voyager, Star Trek: Enterprise, as well as on the Star Trek films Star Trek Generations and Star Trek: First Contact. We will visit about the new Peacock six-part docu-series “The End Is Nye” ..premiered Thursday August 25th (also seen on SYFY) Produced by Seth MacFarlane and starring Bill Nye

People who drink tea may be more likely to live longer than those who don’t, according to a large study. When compared with those who don’t touch the stuff, people who consume 2 or more cups per day had a 9-13% lower risk of mortality. The findings, published in the Annals of Internal Medicine, suggested the result was the same regardless of whether the person added milk or sugar to their tea, or what their preferred temperature was. Tea contains helpful substances known to reduce inflammation.

Wood is one of the most common building materials, but it obviously has a big weakness – fire. Now, a team in Singapore says it has created an invisible coating which can prevent wood from burning. Researchers from Nanyang Technological University say their invention allows for the “natural beauty” of wood to shine through and only activates through exposure to flames — keeping it fireproof. Current fireproofing methods involve using fire-retardant panels (like gypsum or magnesia boards) or treating the wood with thick mixtures that conceal the natural wood grain. The new coating is just 0.075 millimeters thick and transparent, making it invisible to the naked eye.

HBO has given “House of the Dragon” an early renewal for Season 2 after a record-setting debut for the “Game of Thrones” prequel series. House of the Dragon launched August 21, to the largest audience for any new original series in HBO history. The first episode has now been seen by over 20 million viewers across linear, on demand and HBO Max platforms in the US. EVP HBO Programming Francesca Orsi said: “We are beyond proud of what the entire House of the Dragon team has accomplished with season one…delivering a show that has already established itself as must-see-TV…We couldn’t be more excited to continue bringing to life the epic saga of House Targaryen with Season 2.”

With “Bring It On” having celebrated its 22nd anniversary last week, one of the film’s stars is sharing an idea for a potential sequel to the beloved cheerleader comedy. While the film spawned 6 direct-to-video sequels, none of them featured any original castmembers. Gabrielle Union, who played ‘Isis’, head cheerleader for the East Compton Clovers, took to Twitter with her concept, sharing a story about the anniversary for the original film, and writing: “Hmmm so Isis might have a teenager (now)”, alongside a series of “thinking” emojis. If Union’s idea does come to fruition, producers of a new Bring It On movie should have no problem casting it; actresses Chloe Bailey and Ryan Destiny both responded to say they’re ready to sign on. No word yet from Kirsten Dunst.

John Alfred Tinniswood, the oldest person in the UK, has turned 110 years-old.

British firefighters rescued a man who got his hand stuck in a sofa.

Forbes has released its list of the World’s Highest-Paid Tennis Players for 2022.

Experts say your cell phone is dirtier than a toilet seat.

Did You Know: Some cats are allergic to humans?

Fewer than 1% of all Google searches use the “I’m feeling lucky” button.

When Montenegro became independent from Yugoslavia, its Internet domain name went from .yu to .me.

Question: If THIS item was hooked up to an EEG, the readings would be virtually the same as the brain waves of a healthy adult.

I love this idea. Residents of Sweden’s largest island have been competing to determine who has the ugliest lawn. The contest is an effort by the municipality of Gotland to promote water conservation. After the island, saw a record-breaking number of visitors last summer, local politicians realized drastic changes were needed to save its water supplies, so the ugliest lawn contest was created to remind islanders not to waste water, and to talk about ways they can adapt their yards. The winner? Marcus Norström, whose yard was playfully described by the judges as “a really lousy lawn that lives up to all our expectations of Gotland’s ugliest lawn.” They pointed out that the prize-winning yard demonstrates “meritorious laziness” and “great care for our common groundwater.” Norström’s reward for his lack of effort is a visit from gardener and judge Sara Gistedt, who will offer personalized advice on what plants to grow in place of grass in the future.

Buzzfeed shared a post in which people admitted the things they learned embarrassingly late, and here are some cringeworthy and hilarious responses…

☞ “I didn’t know you make pasta with flour and water — I thought you grew noodles…like, on trees.” (Well, please explain rice, then!)

☞ “I was in my 20s when I learned that water polo isn’t played on swimming horses. I was embarrassed…and also disappointed.”

☞ “I just learned that ‘local anesthetic’ does not mean it was made in a lab nearby. I thought you wanted it local, like local honey!”

☞ “For the longest time, I didn’t understand why you would go to a mechanic to get your wheels rotated when they rotate all the time while you’re driving.”

☞ “I thought billboards that said ‘available’ and had a phone number listed were ads for single people.”

☞ “I didn’t know until high school that the ‘not tested on animals’ labels on products were about animal cruelty and not whether the makeup or lotion would actually work on a dog.”

☞ “I was in my early 20s when I learned that reindeer are real; they just don’t fly.”

☞ “I was in my 20s when I realized that the mile-high club didn’t mean getting stoned on an airplane.”


A smile is a facelift that’s in everyone’s price range! - Tom Wilson

An Uber Driver Pulled Over Mid-Ride To Rescue People From A Burning Building
https://www.sunnyskyz.com/good-news