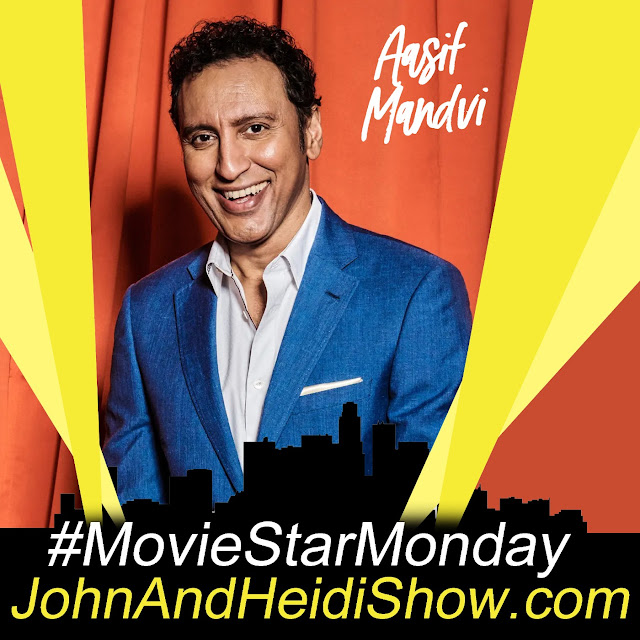 This #MovieStarMonday Aasif Mandvi (Daily Show, The Internship, The Proposal)

We will talk about his role in EVIL, season 3 premiered on Paramount + June 12th and WOULD I LIE TO YOU currently airing on the CW.

80% of adults say crumbs in the bed lead to the crumbiest night’s sleep. A survey of 2,000 Americans asking about the things that disrupt their sleep found that eating in bed is a major culprit. Nearly half (48%) said they regularly eat before bed, with 35% of respondents admitting to actually eating in bed. On the other hand, people feel so strongly against eating and risking crumbs in the bed that a third said it’s a dealbreaker if their partner were to do so. Other top sleep disruptors were, in order: being too hot, not being able to find a comfortable sleeping position, and being awakened by a pet or child.

The sands on Mars may actually be greener than scientists thought. New observations from the Mars rover Perseverance have found that the “Red Planet” is also home to the same kinds of rocks that turn beaches on Earth a dark shade of green. For as long we’ve been staring up into space at Mars, its color has never been in question — it’s a big red rock. Now that Perseverance has landed in the Jezero Crater, however, researchers have discovered volcanic rock, composed of large grains of olivine, a version of which tints many of Hawaii’s beaches dark green.

Get ready to get weird — The first trailer for “Weird: The Al Yankovic Story” dropped. And in true Weird Al fashion, the Daniel Radcliffe-led film looks to offer a unique take on the biopic genre. In it, Radcliffe’s Yankovic says: “I’m tired of people thinking I’m some kind of joke, before confessing his lifelong dream to his friends: “My whole life, all I’ve wanted, is to make up new words to a song that already exists.” From there, we see the Yankovic begin to craft ‘My Bologna’, his 1983 parody of The Knack’s hit ‘My Sharona’. Soon, crowds are cheering Yankovic on and Madonna (played by Evan Rachel Wood) shows up at his mansion to ask if he plans to do a parody of ‘Like a Virgin’, before telling him the song is autobiographical “except for the fact that I’ve had a lot of sex.” The movie’s tagline? “Discover the icon who changed music — literally.” LINK: https://youtu.be/oCPMK8FUVCk

Is the high cost of movie tickets just not in your budget these days? Well, set up a reminder for this Saturday (if you’re in the US), because for one day, movie tickets will be just $3 in the vast majority of American theaters as part of the newly launched “National Cinema Day”. The Cinema Foundation, a non-profit arm of the National Association of Theater Owners, says that Sept. 3 will be a nationwide discount day in more than 3,000 theaters and on more than 30,000 screens. Major chains and all major film studios are participating.

AI-driven chatbot technology allowed a woman to answer questions from beyond the grave at her own funeral. The technology was provided by her son, who runs a company that creates “holographic conversational video experiences”, and allowed British holocaust campaigner Marina Smith to be “present, in a sense”, according to son Stephen Smith. The experience used StoryFile, an AI conversational bot that uses 20 cameras and recordings of the subject to create a digital, holographic clone that can be interacted with. The answers given to questions were entirely Mrs. Smith’s own words. To do this, the subject is interviewed while alive, and asked a large array of questions about their life. The data is then fed into StoryFile, which selects the appropriate recordings to play in answer to questions asked at the funeral. Reportedly, mourners were able to dive into her fascinating life in a morbid but futuristic tribute.

“Opposites attract” is a myth. People are generally attracted to people who look like family members or those with a similar personality type.

There are times when Pluto is closer to the Sun than Neptune – one of these occurrences was from 1979-99.

Salty and spicy snacks can act as antidepressants.

Question: 33% of adults admit they will do THIS by noon on Christmas Day. What is it?

Oscar Mayer, famous for hot dogs, has introduced the “Cold Dog”, a foray into the land of frozen pops — that is flavored like an Oscar Mayer wiener. Yes, you heard that right — it’s a hot dog ice pop. The company describes it as the “first-of-its kind”, and we’re pretty sure they’re right. For the Cold Dogs, Oscar Mayer has teamed up with Popbar, a frozen desserts company that boasts innovations such as the waffle bar and hot chocolate on a stick. They say the Cold Dog is refreshing and boasts the trademark smoky umami notes of Oscar Mayer’s iconic wiener, and is topped with a signature squiggle of “mustard.” The new product is part of Oscar Mayer’s “Stupid or Genius” campaign, focusing on “the wonderfully odd ways to enjoy the iconic wiener beyond grilling.” LINK: https://www.instagram.com/p/CfXCmo3lmwy/

THINGS NEVER TO SAY TO NEWLYWEDS:

• “Sorry I missed your wedding, I’ll catch the next one.”

• “Wow, you both look so similar! Are you sure you’re not related?”

• “You may now kiss the bride. Everyone else has.”

• “I guarantee you that eventually just his breathing will send you over the edge.”

• “Did they ever solve your last wife’s disappearance?”

• “Enjoy the honeymoon. After that, say goodbye to your sex life.”

• “Why was she wearing white?”


A bank is a place that will lend you money if you can prove that you don’t need it. - Bob Hope

Family Adopts Surrendered 15-Year-Old Dog To Give Her The Best Final Days
https://www.sunnyskyz.com/good-news