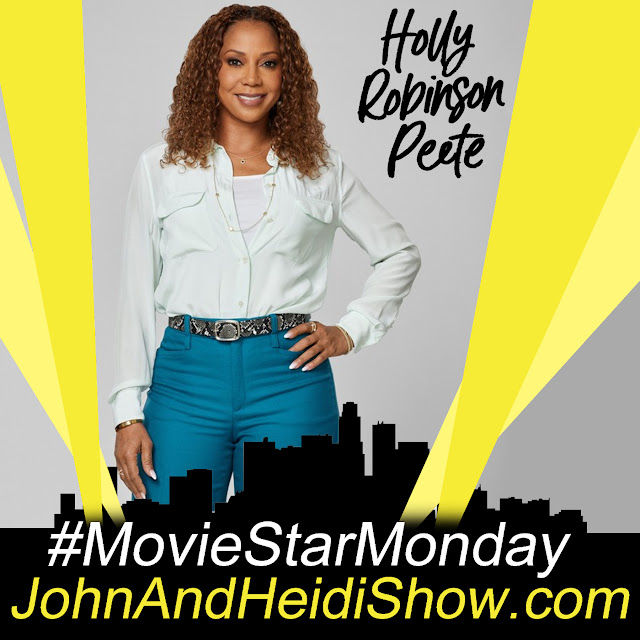 This #MovieStarMonday we visit with Holly Robinson Peete (21 Jump Street, Howard The Duck and MANY MORE) We will visit about her new book “Charlie Makes a Splash!” - https://amzn.to/3QRCdjd which is a follow up to the book “My Brother Charlie” - https://amzn.to/3dmHqSz

• 69% of adults say they feel judged by their partner for their snacking habits.

• 61% of couples have argued about whether or not to rinse the dishes before putting them in the dishwasher.

• 75% of women think that men over age 35 look ridiculous when they wear a hat backwards.

A 9-year-old New Zealand boy unearthed a giant 3-foot earthworm in his backyard. Footage of the colossal nightcrawler is blowing up on Facebook. Barnaby Domigan said: “I thought it was massive, and amazing, and a little bit disgusting.” The Kiwi kid had exhumed the “Dune”-esque dirt digger by a stream at the bottom of the family’s garden in Christchurch. Facebook pics show the youngster using a stick to tote the supersized soil snacker, which is so big it looks photoshopped. And while his mom thought the 3-foot worm was “the stuff of nightmares,” Barnaby thought it was “wonderful.” After snapping a pic of the titanic tunneler, he released the earthworm he had named “Jim” back into the garden. LINK: https://tinyurl.com/yckwe5mw

Fans of “Home Alone”, rejoice! The iconic Christmas movie is set to be played in theaters alongside a live orchestra this festive season. The beloved film stars Macaulay Culkin as 8-year-old ‘Kevin’, whose family goes on holiday for Christmas and accidentally leaves him behind. The 1990 classic was scored by John Williams, whose impressive repertoire also includes “Star Wars”, “Jaws”, “Indiana Jones”, and “Jurassic Park”. Williams’s work on the Home Alone soundtrack is as iconic as the traps Kevin sets, featuring old Christmas classics, like ‘Rockin’ Around the Christmas Tree’, as well as original carols. Home Alone will be shown in theatres across the UK this December.

“Dancing With the Stars” season 31 will feature a lot of firsts – including a move to streaming (on Disney+), the show’s first-ever drag queen competitor, and a brand-new host. “RuPaul’s Drag Race” star D.J. “Shangela” Pierce will be among the competitors for the coveted Mirror Ball trophy. Other stars set to dance this season are: actresses Selma Blair and Cheryl Ladd, TV host Wayne Brady, “Real Housewife” Teresa Giudice, previously-announced competitors Charli D’Amelio and her mom Heidi, “The Bachelorette” star Gabby Windey, and singers Jordin Sparks and Jessie James Decker, among others. Len Goodman, Carrie Ann Inaba, Bruno Tonioli and Derek Hough will be returning to judge, with season 19 winner Alfonso Ribeiro joining Tyra Banks as a co-host for the new season, which premieres Sept. 19. (today)

The call of the humpback whale is louder than a Concord jet and can be heard 500 miles (800km) away.

Small as they are, ladybugs have a unique smell that humans are incredibly sensitive to.

In Japanese, the word “kimono” literally means a “thing to wear.” Ki is “wear,” and mono is “thing.”

During WWII, the Pittsburgh Steelers and Philadelphia Eagles combined as the “Steagles”.

A new California law could raise the fast-food minimum wage to $22 an hour.

A study found that just over 65% of adults drink alcohol to relax.

In 1984, a Canadian farmer began renting ad space on his cows.

In Chinese, saying “yeeha” means you need to use the restroom.

Tic Tacs got their name from the sound they make when tossed around in their container.

50% of apartments in Los Angeles don’t come with a fridge.

Question: According to a survey, THIS is the #1 thing in our home that we have too many of? What is it?

Breast implants and butt lifts may be a recession-proof business, according to a new survey by the American Society of Plastic Surgeons. The first-of-its-kind poll reveals 3 in 4 cosmetic surgeons are seeing booming business as people move past the coronavirus pandemic. The survey also found that nearly 30% percent of cosmetic surgeons say their business has actually doubled after COVID, with women between 31-45 the most likely patients to seek breast implants, liposuction, and tummy tucks. Why now? For many, COVID shutdowns allowed people to work from home — giving them a chance to save up more money, instead of dining out or spending on the daily commute.

As children, we received countless warnings from parents and other adults concerning disastrous behaviors that should be avoided at all costs. From comical exaggerations to outright lies, here are some relatable tweets about the things adults conditioned us to worry about…

☞ “Did anyone else’s parents tell them that if you sit too close to the TV you’ll go blind?”


Never go to a doctor whose office plants have died. - Erma Bombeck