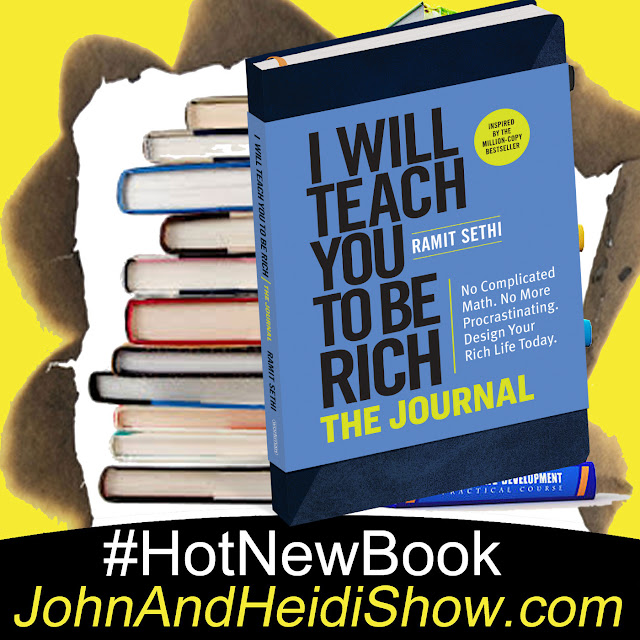 Today we visit with Best-selling author Ramit Sethi about his book I Will Teach You to Be Rich, Journal. - https://amzn.to/3dKjaKk

Marijuana users get a bad reputation for being lazy or unmotivated while high. But a new study has found that may not be true. Researchers from the University of Cambridge say cannabis users don’t show any less motivation to do things than people who avoid the drug. Their study finds “stoners” are actually more likely to enjoy themselves during common situations, like seeing friends and family.

Queen Elizabeth II penned a top-secret letter — and it won’t be opened until the year 2085. She composed the note to the residents of Sydney, Australia in 1986 to celebrate the restoration of the city’s Queen Victoria Building. The structure, originally built in 1898 and named after the queen’s great-great grandmother Victoria, is located in the heart of the city’s downtown. The sealed letter is accompanied by these instructions for Sydney’s Lord Mayor. “On a suitable day to be selected by you in the year 2085 AD, would you please open this envelope and convey to the citizens of Sydney my message to them.”

The death of Queen Elizabeth II has launched “The Crown” into the Netflix’s Top 10 list. In the week following the Monarch’s death, the British royal drama entered in 7th spot with 17.7M hours viewed. The first season of The Crown premiered in 2016, long before the streamer started putting out detailed rankings. The drama series kicked off by starring Claire Foy as ‘Queen Elizabeth II’ and Matt Smith as ‘Prince Philip’. It traced her life from her wedding in 1947 to 1955, taking in the death of King George VI, Elizabeth’s ascension to the throne, and leading up to resignation of Winston Churchill as Prime Minister.

Saturday Night Live” is set to return Oct.1, but for the first time in 10 years, Kate McKinnon won’t be stepping onto the stage in Studio 8H. She left the show following its 47th season in May, and now that former cast members are gearing up for the premiere, she told “Live From E!” host Laverne Cox what she’s going to miss the most about SNL – the people. While on the 2022 Emmys red carpet, she said: “It’s really a family: the cast, the crew, the writers, the producers.” She called the cast her “favorite people in the world. Just the most amazing group just doing this crazy thing week after week. I couldn’t ask for more.” Luckily, McKinnon still has lots to look forward to—including her role in Greta Gerwig’s highly-anticipated “Barbie film”, which she calls “incredible.”

Last month’s big buzzword was “quiet quitting”, the concept of performing your job expectations and not going above and beyond. That was closely followed by “quiet firing”, when your employer wants you gone, so they treat you poorly to the point that you want to quit. Now, we have “quiet returning”. What’s that? The act of returning to the workforce after retirement. For many, working in their retirement years is on their terms, not their employer’s, or even on society’s expectations. These days, many recent retirees are saying they want to work at least “a bit” in retirement. In the US, more than 2 million people retired during the first 18 months of the pandemic. Many are now heading back to work. Some cite money worries, tied to inflation. But a full 60% of retirees returning to work said they were simply “looking for something to do.” Joblist CEO Kevin Harrington said: “Many people struggle with how to spend their time after they retire and miss the social connection that work provides.”

The vast majority of blind people in the US and UK cannot read braille.

It takes approximately 12 hours for food to entirely digest.

If your last name is closer to the end of the alphabet, you’re more likely to be an impulse spender.

Most female cats prefer using their right paw, and males are more likely to be left-pawed.

Question: A study found that you’re more likely to befriend a person whose WHAT is similar to yours?

Since the death of Britain’s longest-serving monarch, unofficial souvenirs have already rolled out at gift shops in London and online at places like Amazon and Etsy. There are fridge magnets, tea sets and flags. And mugs, of course, and T-shirts and sweatshirts with the face of Queen Elizabeth II that are inscribed with the dates of her 70-year reign: 1952-2022. Cool Britannia, a shop that sells memorabilia across the street from Buckingham Palace, pushed its suppliers to work overnight to get mementos ready by Saturday, just 2 days after the queen’s death. Meanwhile, items depicting the new monarch, King Charles III, are also on their way to shops, where tourists have been buying other royal gifts like queen bobbleheads and rubber ducks wearing crowns. Official merchandise will take longer to arrive to approved vendors, who have suspended sales of royal souvenirs out of respect for the mourning period.

They don’t call them the “People of Walmart” for nothing. Twitter users have been sharing the strange things they’ve overheard there while shopping and minding their own business. Here are the best…

➠ “Y’all need to come over for dinner – we’re going to fry up those squirrels.”

➠ “I have too much blood in my alcohol system.”

➠ “Oh my gosh! Water has NO calories! Did you know that? That’s so crazy”

➠ guy: so have you taken a shower yet? Girl: no but I was gonna take one when I got home

guy: so ur telling me you’ve been walking around all day with poop on ur head from a bird?

➠ ‘Can you stop? This is why I can’t bring you places” – A woman just as she starts hula-hooping in the middle of an aisle

➠ “Are you sleeping in the horse trailer tonight?”

➠ A 4-yr old: “I’ll punch you right in the Sponge Bob!” Might have to use that prior to my next bar fight.

➠ (singing) “All I want for Christmas is my 10 front teeth…”

“All men are equal before fish.” - Herbert Hoover