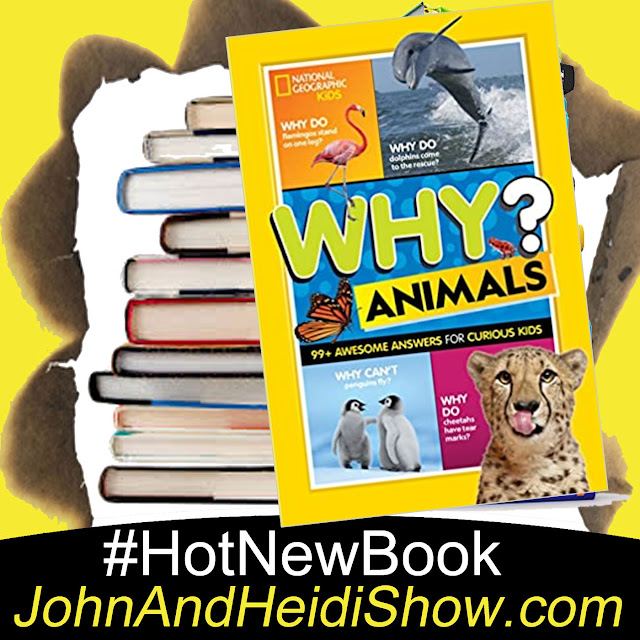 Today we visit with Best Selling Author Julie Beer about her new book Why? Animals: 99+ Awesome Answers for Curious Kids. From National Geographic Kids—creators of the bestselling Why? Over 1,111 Answers to Everything and Why Not? Over 1,111 Answers to Everything—Why? Animals is the first in a brand-new series of fun-packed books designed to supercharge your child’s curiosity while keeping them entertained for hours. Why do flamingos stand on one leg? Why can’t penguins fly? Why do fireflies light up? Why do elephants have such good memories? What is the slimiest animal? Why do hyenas laugh? Why do dogs wag their tails? AVAILABLE NOW - https://amzn.to/3BZvIXg

According to the old saying, breakfast is the most important meal of the day, but a new study says it shouldn’t be the biggest meal of the day. Some believe that “front-loading” calories by making breakfast the largest meal helps people burn more calories throughout the day. But researchers from Scotland’s Aberdeen University found that it doesn’t matter whether we make breakfast, lunch, or dinner the biggest meal — our body processes the calories in the same way, at the same rate. The team did point out, however, that “in the real world”, eating more food first thing in the morning could help people lose weight by making them less ravenous at lunch and dinnertime.

Who are the most influential modern entrepreneurs? Well, not Elon Musk, according to a survey. In a poll of Americans for Herbalife Nutrition, participants were given a list of 40 entrepreneurs from the last 50 years and asked to select those who’ve made the biggest positive impact on society. Microsoft founder Bill Gates came first, followed by Amazon’s Jeff Bezos and late Apple co-founder Steve Jobs. Elon Musk — founder of SpaceX, and CEO of Tesla, came 4th, and Facebook’s Mark Zuckerberg was 5th. The rest of the top-10: Oprah Winfrey (co-founder of Oxygen, founder of O, The Oprah Magazine), Melinda Gates (co-founder of the Bill & Melinda Gates Foundation) and Sam Walton (founder of Walmart and Sam’s Club), followed by Google co-founder Larry Page and Ted Turner, founder of CNN.

Colin Farrell received a rapturous 13-minute standing ovation at the Venice Film Festival premiere of “The Banshees of Inisherin”. The 46-year-old Irish actor reunites with Brendan Gleeson and director Martin McDonagh in the drama about 2 men whose life-long friendship is abruptly ended. The 2 actors previously starred in McDonagh’s 2008 crime-comedy movie “In Bruges”. At the Venice ‘Banshees’ debut, McDonagh, Farrell, Gleeson, and co-star Kerry Condon were met with the “longest and loudest reception” of any film that premiered at the festival this season. Some have speculated, however, that this may have been in response to Farrell “who broke with tradition by wading into the crowd to take selfies with fans and sign autographs, which only made the cheering grow louder and more sustained”. The Banshees of Inisherin opens in theaters Oct. 21.

A Swiss company is launching a coffeemaking system that you’ve probably never heard of before. Designed to replace capsules that produce thousands of tons of waste each year, Migros has announced “coffee balls”, spherical capsules that are fully compostable, unlike the plastic and aluminum containers popularized by other companies, like K-Cups. Migros says its coffee balls are encased in a thin, flavorless, seaweed-based cover that can be discarded with the spent coffee after use. The company said the CoffeeB system, which also features a special coffeemaker, will be ‘rolled out’ in Switzerland and France this year.

Due to “shrinkflation”, the size of our snack packages may be getting smaller, but our appetite for eating them definitely isn’t. Big companies report that snack sales are soaring. Doritos, Cheetos, Ruffles, PopCorners, Smartfood and SunChips sales all grew by double digits in the second quarter. Yes, that’s partially because snacks are getting more expensive, and because people are getting back to their ‘normal’ lives and want food they can eat on the go. But experts say it’s not just that. Eating habits have changed, and people are increasingly snacking instead of eating traditional meals. About 64% of consumers across the world said they prefer to eat several small meals throughout the day, rather than a few large ones, according to a 2021 survey, up from 59% in 2019. About 62% reported replacing at least one meal a day with snacks. In the US, the snack market grew from about $117 billion in 2017 to an estimated $151 billion in 2022, and is forecasted to grow to $170 billion in 2027.

At any point in time, 0.7% of the world’s population is drunk.

It snows metal on Venus.

Approximately 25% of people sneeze when exposed to bright light.

Workaholics generally get less work done because they take on too much work and tend to be disorganized.

According to a study, colds and the flu take a bigger toll on women than men.

Question: 59% of people agree – if a home smells like THIS, it smells clean. What is it?

Kellogg’s latest cereal is ready to eat – just add…water?) The company’s new “Instabowls” look like traditional single-serve bowls — small tubs of cereal, made to be eaten dry or with milk. But they also contain milk powder. Add some cold water and stir, the milk rehydrates, and voila! Instant milk and cereal. The bowls come in 4 types: Frosted Flakes, Raisin Bran Crunch, Froot Loops and Apple Jacks, for US $1.98 each. https://amzn.to/3BykVSC

Merriam-Webster is hip to your slang. The dictionary has added a new slew of slang among its 370 new definitions. Examples…

⇒ Yeet: (n.) an expression of surprise, approval or excited enthusiasm. (“I get to eat the cookies you baked before we eat dinner? YEET!”)

⇒ Yeet (v.) to throw something without regard for the thing being thrown. (“I yeeted the quiz that I failed right into the trash can.”)

⇒ Janky (adj.): of very poor quality, or not functioning properly. (“My janky computer likes to restart itself in the middle of Zoom meetings.”)

⇒ Sus (adj.): short for suspicious or suspect. (“Isn’t it a bit sus that you never see Peter Parker and Spider-Man in the same location?”)

⇒ Lewk (n.): a fashionable look distinctive to the wearer and noticeable to others. (“RuPaul’s Drag Race UK” contestant Bimini Bon Boulash turned a lewk on the runway when she emerged in a Vivienne Westwood-inspired bridal corset.”)

⇒ Pwn (v.): to dominate and defeat. Pronounced like “own.” (“I totally pwned my opponents in an epic game of tag yesterday.”)

⇒ Baller (adj.): excellent, exciting or extraordinary, especially in a way that is suggestive of a lavish lifestyle. (“It was very baller of you to share your lottery winnings with us.”)

Other words not considered slang, but finally accepted into Merriam-Webster include ‘Pumpkin spice’, ‘LARP’ (short for live action roleplay), ‘Level up’ (Advancing or improving oneself as if you’re playing a game.), and ‘Metaverse’.