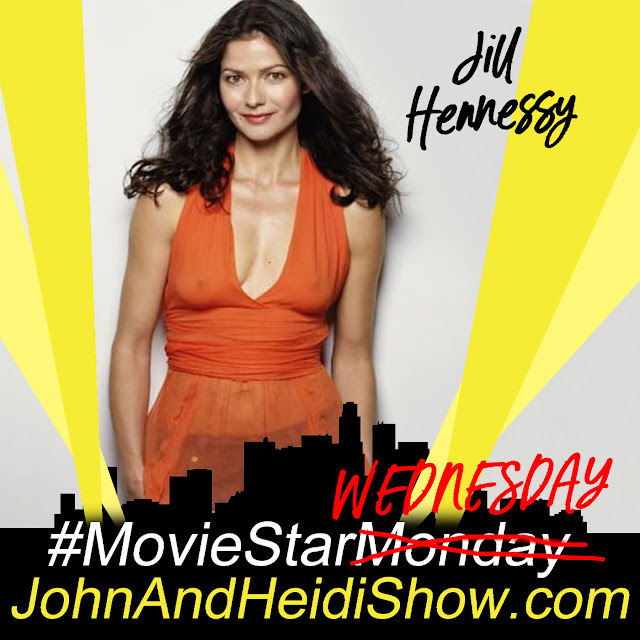 Today we visit with Jill Hennessy, best known for her starring roles on LAW & ORDER and CROSSING JORDAN. Jill starred in the special event series SHOTS FIRED, was the lead in the Mike Clattenburg comedy CRAWFORD and was a guest star in the pilot of YELLOWSTONE, with Kevin Costner. Hennessy was a recurring character on the CBS drama MADAM SECRETARY and was featured in several episodes of THE GOOD WIFE.

We will visit about her new show CITY ON A HILL. Corrupt FBI agent Jackie Rohr (Kevin Bacon) is back, looking to exploit Boston's criminal justice system in a desperate attempt to salvage his own career. Unfortunately for Jackie, ADA Decourcy Ward (Aldis Hodge) is onto his adversary’s latest misstep. https://www.sho.com/city-on-a-hill


It’s a situation every new parent has faced: After falling into a deep, the baby has awakened, and just won’t stop crying. Being held, swaddled, and sung to doesn’t seem to help. Now, it seems scientists in Japan have finally figured out the secret to success. They say a 5-minute walk, followed by cuddling in a chair is the key to getting a crying baby back to sleep. A study determined that holding and carrying a crying baby works better than a simple cuddle, because it causes physiological changes, including slowing the heart rate. This phenomenon, known as the “transport response”, is also seen in dogs and monkeys. Researchers observed that when these animals pick up their infants and start walking, the bodies of their young tend to become docile, and their heart rates slow. The researchers are now developing an app based on their findings, which will alert parents if they need to pick their baby up.

Ferrari has produced its first SUV – but don’t call it that. The legendary Italian automaker’s first 4-door production vehicle has seats for 4 people and space for plenty of cargo. It also features 4-wheel-drive and a V-12 engine capable of cranking out 715 horsepower. And with the company’s sporting and racing history, Ferrari insists it is not unsophisticated “Sport Utility Vehicle.” The Ferrari Purosangue, which means “pure blood” in Italian, might look like a crossover SUV but the company is calling it a “car”.

Dave Chappelle may have been in more danger than initially suspected when he was assaulted at a May Hollywood Bowl appearance. A roommate of the attacker testified on Friday that Isaiah Lee had used the same replica handgun with a hidden blade to stab him in the abdomen. Roommate Dijon Washington said Lee grew increasingly erratic in the months before Chappelle was attacked. Things escalated on Dec. 2 when Lee stabbed his roommate after a perceived insult. A judge ruled there is sufficient evidence to try Lee for the attempted murder of Washington.

Pat Sajak appears to be ready for his last spin on “Wheel of Fortune”. The 75-year-old said to Entertainment Tonight”: “In most television shows by this time, you would have said, ‘That’s probably enough,’ but this show will not die.” Wheel of Fortune began in 1975, and Sajak came on board in 1981. In his 4-decade tenure, Sajak and co-host Vanna White have become the faces of the game show. Looking ahead, Sajak said, ” We’re getting near the end. It’s been a long [time]. We’re not gonna do this for another 40 years.”

A study says the average woman spends 5 of the 168 hours a week in a bad mood.

A Florida highway was covered by Coors Light beer cans after a truck overturned.

Taylor Swift has reportedly turned down an offer to perform at the 2023 Super Bowl halftime show.

Instagram was down for over an hour last week.

One of the largest pyramids in the world is a Bass Pro Shop in Memphis, Tennessee.

Bees actually have knees. The expression comes from the fact that they store large build-ups of pollen in hairy baskets on their knees.

Viruses can get viruses.

Question: If you’re average, you have 3 or these, but you probably only use 2 of them. What are they?

A company has announced plans to build a number of $5 billion resorts around the world — shaped like the Moon. Canada-based Moon World Resorts’ plans include a $198 million replica of…well…the moon which would contain facilities ranging from realistic lunar training to luxury apartments. MWR’s founders see it as an opportunity for people to experience space travel without the cost of actually leaving Earth. They plan to license 4 MOON resorts around the world: one in North America, Europe, Middle East-North Africa, and Asia. The multi-leveled MOON structure will contain a lunar surface and colony, as well as 4,000 hotel suites. Those will be above levels containing a theatre, potential casino, health spa, business and convention centre, as well as restaurants and boutiques. It promises to “deliver a dynamic and authentic experience on planet earth; available to all, not merely a few.” They hope to open the first location in 2027.

We don’t recommend you try any of these shady ways of saving a few bucks. They’re nice to think about, though…WE DO NOT RECOMMEND THESE!

✗Instead of paying by the hour for parking, drop by an auto shop, ask them to rotate your tires, and say you’ll swing by in a few hours.

✗ If you’re hungry between 6-8am, you can pop into a busy hotel and get a free breakfast.

✗ If you break an appliance, and you’re broke, buy an identical one (credit card, of course), swap them out, and return the broken one for a refund.

“Marriage is the chief cause of divorce.” – Groucho Marx

Without the help of a football team, several parents, and a few Cub Scouts, Todd Hagan would still be stuck at home — due to a destroyed wooden bridge. Hagan lives in Switzerland County, Indiana, and on Sept. 3, flash flooding caused by heavy rains completely demolished the bridge, his only connection to a main road. When his grandson’s football coach, Ryan Jesop, learned about it, he started calling his players to see if they could help rebuild the bridge. About 30 people showed up the next day. The crew removed and replaced the wooden planks of the 60-foot bridge in less than 3 hours. Hagan, who wrote everyone who helped a thank you card and made a donation to the team, said it was “just amazing” to see so many people come together, adding, “I couldn’t be more thankful.”