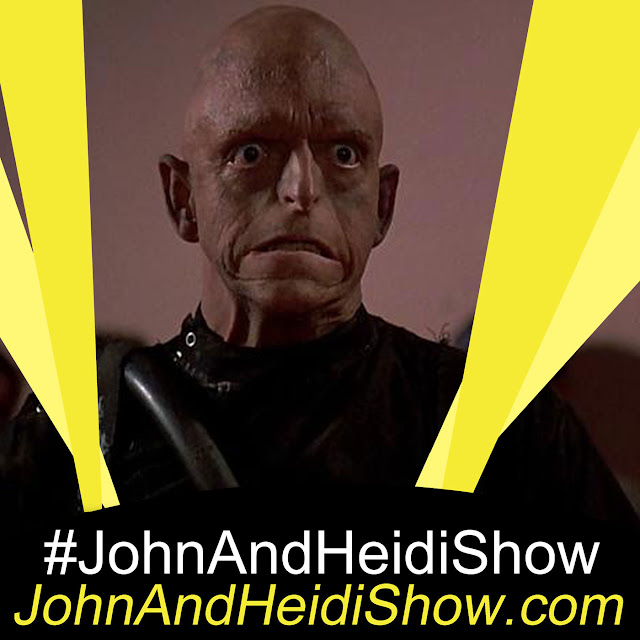 Today we visit with acting veteran and horror genre icon Michael Berryman. He was born in Los Angeles, California. He was born prematurely with Hydrochrotic Ectodermal Dysplasia, a rare condition leaving him with no sweat glands, hair, fingernails or teeth. Michael's father was renowned neurosurgeon Sloan Berryman and his mother, Barbara, was a Registered Nurse. Michael as a young child had extensive cranial reconstruction @ Children's Hospital in Los Angeles. Michael took all these challenges and turned them into a golden career in film and television, thanks to legendary film director George Pal discovering Michael, who at the time owned and worked at a gift shop/art gallery in Venice, California.

Berryman went on to star as PLUTO in Wes Craven's cult classic THE HILL'S HAVE EYES. Additionally, Berryman has appeared in such films as WEIRD SCIENCE, STAR TREK IV, ARMED RESPONSE, CUT AND RUN, SOLAR CRISIS, THE DEVIL'S REJECTS, etc. He also has appeared in more main-stream roles such as the comedy SPY HARD and family favorite SCOOBY DOO. Michael's many television credits include TALES FROM THE CRYPT and X FILES. Michael Berryman portrays a gamut of characters, ranging from evil, dangerous and creepy to wise, gentle, sage, mystical, whimsical, comedic and even angels. Michael is an adored favorite of horror and sci-fi movie fans worldwide.

Michael and his wife Patty own and run a farm in Northern California where he and his wife have walnut, apple, pear, cherry and plum orchards and raise their beloved horses. Michael loves to bake pies.

Most recently, Michael stars with Edward Furlong in the feature film BELOW ZERO, as well as horror/ thrillers EREBUS, SELF STORAGE, starring opposite Eric Roberts, RED AND YELLA KILL A FELLA and ARMY OF THE DAMNED. Michael will also star in the television series HELL HUNTERS (based on the popular comic boo) as well as the series HELL'S KITTY.

Do you steal candy from your kid’s Halloween haul?

How much do you spend on candy for trick-or-treaters?

If you’ve ever wondered what the Duke and Duchess of Sussex like to do for fun (and who hasn’t?), she has answers for you. In a video that accompanied her ‘Variety Power of Women’ cover, Megan Markle talked about the entertainment she and her family turn to for amusement. The vid begins with the words: “Hi, I’m Meghan, and I play a mean game of Scrabble!” She goes on to say that she’s “very good at Jeopardy”, loves to cook and makes “a really solid Bolognese sauce.” She says her favorite rom-com of all time is “When Harry Met Sally”, but “put Julia Roberts in anything, and I’m going to be a fan of those too”. When asked what she’s been watching lately with Prince Harry, she says that once the kids are in bed, and she has “played a little Wordle”, they occasionally turn on the TV, and “do endless searching until you get tired of searching, you don’t watch anything!” LINK: https://tinyurl.com/mvz8n36z


Faced with Trevor Noah’s imminent departure from “The Daily Show,” Comedy Central is reportedly considering a rotation of hosts to fill his seat. Noah’s last show will be Dec. 8, and no successor has been named. With ratings down, Variety reports that Comedy Central plans to relaunch a “reinvention” of the show beginning Jan. 17, with sources naming contributors Roy Wood Jr. or Jordan Klepper as the most likely replacements. Other featured performers, Desi Lydic and Ronny Chieng, could also be tapped.

96-year-old Dick Van Dyke was spotted last week handing out money to homeless people looking for work at the Malibu Community Labor Exchange. The “Mary Poppins” star is said to be a big fan of the nonprofit and frequently returns there to help those who are job hunting. Dressed in a long-sleeved white shirt, gray sweatpants and black slip-on shoes, Van Dyke was handing out $5 bills and chatting with those who came to seek help. He was heard saying: “Whenever I have some 5s, I come by.” A staffmember at the center said the “Chitty Chitty Bang Bang” star first started coming to the exchange during the height of the pandemic in May 2021.

A group of restaurant employees dressed as Power Rangers were real-life superheroes last Friday. Staff at NōKA Ramen in Oakland CA, where they serve a cocktail called “The Noka Rangers,” came to a woman’s rescue after she rushed into the eatery trying to escape from a man. A Twitter thread spelled out the story, saying: “I’m at a ramen shop owned by Thai people in Oakland dressed as power rangers, when a woman comes rushing in saying she wasn’t safe — and a man came running in after her and puts her in a chokehold…the black power ranger (the manager with a kickass bob) and the yellow ranger, told the man to leave,” the thread went on. “He swung at them. This is when all rangers yelled, ‘Huey!’ (a Thai expression meaning ‘WTF’). We’re trying to call the cops. Patrons are shaking & crying. The pink power ranger (hostess) tells us our food is free. The man…starts picking up (things) to throw at the windows. I, for some reason, start wolfing down my ramen. Next, the Yellow Ranger grabbed the man by the collar and dragged him out of the restaurant…More swings are swung, more power rangers pile onto the man at the door…I tell the hostess we’re paying her for our meal & double the tip. The Black Power Ranger manager explains that they are “beta testing these costumes, but we wore the right outfit tonight.” NōKA Ramen posted a snap of their Power Rangers, with the caption: “Our NōKA Rangers were real life heroes last night…Like our heroic namesakes, it’s not just the powers and costumes that give us strength. It’s who and what we are inside that empowers us.” LINK: https://tinyurl.com/88hnkzd8

Cold showers have more health benefits than hot or warm showers. These include improved circulation, stimulation of weight loss, and easing depression.

In the 18th Century, high heels were fashionable, even for children.

All major league baseball umpires must wear black underwear while on the job.

A gun with a silencer attached sounds about as loud as a car door being slammed.

You can light a Bic lighter about 3,000 times before it runs out of fluid.

When ‘feminine scents’ such as vanilla are sprayed in women’s clothing stores, sales increase.

Question: 20% of us say they started doing THIS way back in August. What is it?

When you use the restroom you expect to see toilet paper, soap, an air freshener, and paper towels. But the Eufaula Alabama Police Department added "snake" to that list when they discovered a surprise visitor back in September. During the day shift, deputies found a snake in the toilet. “We never know from one day to the next what kind of call we will receive during our shift," police noted on social media. "Today was no exception, however a snake in the toilet wasn’t on our list of possibilities. Day shift removed the unwelcomed visitor and released it to a more suitable habitat. The snake was a harmless Gray Rat Snake." https://wcyb.com/news/offbeat/surprise-visitor-snake-found-in-toilet-in-alabama-reptile-animals-eufaula-alabama-police-department-social-media-post-gray-rat-snake

Top-searched “How to make…” decorations:

Happiness is having a large, loving, caring, close-knit family in another city. - George Burns

Happiness is a dry martini and a good woman… or a bad woman. - George Burns

When I was a boy the Dead Sea was only sick. - George Burns

College Wrestler Jumps On Grizzly's Back To Save His Friend During Attack
https://www.sunnyskyz.com/good-news