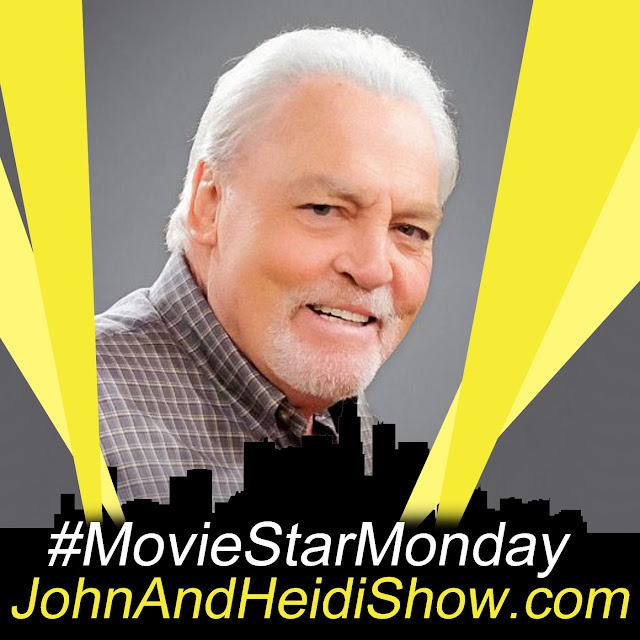 This #MovieStarMonday we visit with Stacey Keach (Mike Hammer, American Greed and Titus from TV and movies like Prison Break, The Bourne Legacy, The Long Riders, Fat City, The Ninth Configuration, Cheech & Chong’s Up in Smoke & many more)

Early risers who remain active throughout the day tend to be more content and sharper mentally, especially in older age, according to scientists at the University of Pittsburgh. In a study, they found that seniors who get up early and stay busy all day long are both happier and perform better on cognitive tests in comparison to those with more irregular daily activity patterns. The researchers say their findings suggest that having a regular activity plan (or active routine) could help contribute to happiness and mental acuity. That plan could include scheduling time to meet a friend or neighbor, enjoying sunshine, exercise and eating on a regular schedule, and caring for a pet.

If you’re a “night-owl”, you may be at higher risk for type 2 diabetes and heart disease, a new study found. Night owls were more sedentary, had lower aerobic fitness levels and burned less fat at rest and while active than “early birds” in the study by researchers at Rutgers University in New Jersey. Night-owls were also more likely to be insulin-resistant. Early birds also tend to perform better in school, and are more active throughout the day, which may partly explain why the study found they have less risk of cardiovascular disease.

Johnny Depp is dating his lawyer — but not the one you’re thinking of. TMZ reports Depp is seeing an attorney named Joelle Rich, who repped him in his UK defamation trial, which he lost. Apparently, Johnny didn’t hold the defeat against her. Rich is married, but in the process of getting divorced. She and her estranged husband share 2 kids. She was NOT part of the Virginia trial team that won over Amber Heard, but she was present in the court for “support”, according to reports. Many who followed the Virginia trial were convinced there were sparks between Depp and attorney Camille Vasquez, speculation that prompted her to call the the speculation “sexist.”

Brad Pitt is a big Goop fan. He gushed about Gwyneth Paltrow’s famous beauty brand as he discussed his own new skincare line in an interview with Vogue. The publication described his line, called ‘Le Domaine’, as “a science-meets-nature line of genderless skin care essentials that he developed in partnership with the Perrin family”. They’re the renowned vintners who are also Pitt’s partners in the wine business. Of Goop, Pitt added: “I love what Gwyneth’s done…she has built this empire. She has always had that in her as a curator, and it’s been a lovely creative outlet for her. In fact, come to think about it, she was probably the first one who got me to even wash my face twice a day.” The pair famously dated from 1994-1997 and were briefly engaged.

Four original “Beverly Hills Cop” cast members – Judge Reinhold, Paul Reiser, John Ashton and Bronson Pinchot – are reuniting with Eddie Murphy for “Beverly Hills Cop: Axel Foley.” Joseph Gordon-Levitt and Taylor Paige also star in the third sequel to the 1984 action-comedy classic, which follows Detroit cop ‘Axel Foley’ to Los Angeles, where he gets into trouble investigating the death of a friend. Reinhold, Reiser and Ashton reprised their roles in 1987’s “Beverly Hills Cop II,” while only Reinhold and Pinchot returned for “Beverly Hills Cop III” in 1994. The new Netflix film, which is currently in production, is directed by Mark Molloy. Plot details are being kept under wraps.

If you’re once again dreading the thought of dragging yourself through another workweek with no possible way of accomplishing all the tasks on your “must do” list, here’s something to consider: Being your most productive self doesn’t necessarily mean doing more, according to a new book. Celeste Headlee, a journalist, radio host and author of “Do Nothing: How to Break Away from Overworking, Overdoing and Underliving,” says that there’s only so much you can schedule into a busy day, and trying to work more ends up being counterproductive…to the point that “Doing nothing at all is actually going to help you produce more.” To NOT reach that point, she suggests avoiding unnecessary screen time, which allows the brain to rest, adding to your productivity later. And that includes minimizing use of social media, which she calls “addictive and exhausting”.

Ever wondered why potato chip packages seem like they’re full of air? Well, wonder no more. TikToker @sherifelsahly posted an informative video, explaining that chip bags actually contain nitrogen, which is designed to help protect the precious snacks from getting crushed, while also retaining freshness. The website for the brand Walkers backs that up, stating: “There is a very good reason for the packets not being filled right to the top. Crisps are very fragile and can get crushed very easily. To try and prevent this from happening, we put air in the packs before they are sealed to act as a cushion for the product during transit. This does mean that the packets have to be a bit bigger than the contents.” LINK: https://tinyurl.com/4vf5juaz

In 2005, a fortune cookie company correctly foretold lottery numbers, resulting in 110 winners. An investigation found that no fraud was involved.

Thomas Edison, the inventor of the lightbulb, was afraid of the dark.

The word ‘bi-weekly’ has two different definitions: Twice a week and once every two weeks.

Mona Lisa was stolen from the Louvre in 1911, which actually drew more visitors to see the empty space than the actual painting.

Question: A survey found the average family sends over 10,000 texts to each other in a year. What’s the #1 thing they are texting about?

Spanish authorities have arrested a man who admitted to the driving offenses of nearly 100 people in exchange for money, in order to keep their record clean. Police on the Balearic Islands in Spain announced that the unnamed man was advertising his services online, charging 75-200 euros per point deducted from his own driving license – and business was booming. An investigation revealed that the Armenian had long had his own driver’s license suspended, but continued to take the blame for others’ offenses and make a profit in the process. He had confessed to committing 2 offenses on the same day within a half-hour — 800 km (500miles) apart. Plus, in over a dozen instances, he admitted to driving a speeding motorcycle, although radar traffic camera footage clearly showed that the riders were women.

A film fan who has watched 154 horror movies this year has tweeted his 8 favorites. Dan (@Dan_Draws)’s list ranges from one he calls the “most graphically violent film I’ve seen in a long while” to a 1980s slasher film with “the most bats*** crazy twist ending I’ve ever seen”. Here are his 8 fav horror flicks…just in time for Halloween:

✪ Hell House LLC (2015): Tells the story of a haunted house attraction that accidentally sets up shop in an actual haunted house.

✪ The Sadness (2021): This is the “most graphically violent” one. He calls it a “new twist on the zombie/outbreak genre”.

✪ Sleepaway Camp (1983): This slasher flick is the one he said has the crazy ending. It stars Felissa Rose, as a shy girl who attends a summer camp where the kids and counsellors start dropping like flies in very suspicious circumstances.

✪ “Green Room” (2015): Patrick Stewart plays a bloodthirsty neo-Nazi in this one, which Dan describes as “more of a thriller”, but still “super stressful”.

✪ “Unfriended” (2014): Set entirely on the main character’s computer, things take a turn when a ghost crashes the chatroom and starts causing chaos. Dan says it’s “a lot of fun.”

✪ “Sorority Row” (2019): It’s “dumb but fun”, according to Dan. It follows a group of sorority sisters who cover up the death of their house sister, but are then stalked by a serial killer.

Age is an issue of mind over matter. If you don’t mind, it doesn’t matter.
Mark Twain

I am only human, although I regret it.
Mark Twain