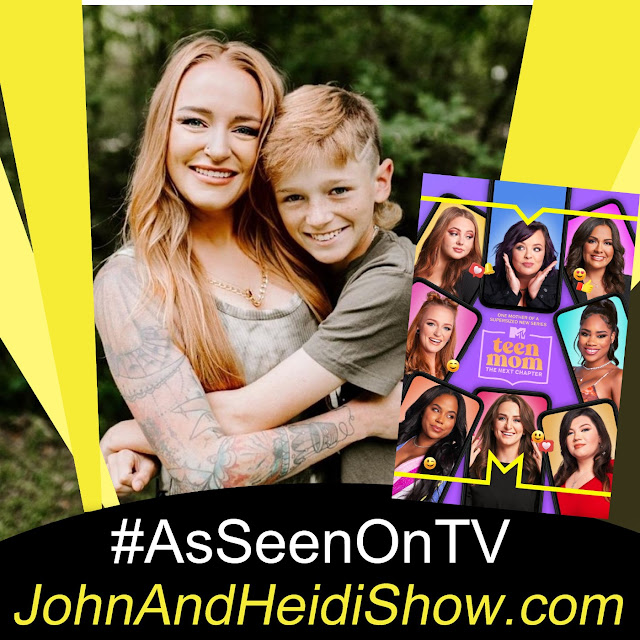 Today we visit with Maci Bookout McKinney (16 and pregnant in 2009) about her new show... “Teen Mom: The Next Chapter” airs Tuesday nights at 9pm ET/PT on MTV. https://www.mtv.com/shows/teen-mom-the-next-chapter

Smartphones and tablets are causing early puberty in children, according to new research. Scientists in Turkey say the devices emit blue light, which interferes with the production of melatonin, a hormone that slows sexual maturity. The scientists add that kids should not use digital devices before bed, because humans secrete the chemical at night.

Apparently, Malibu is big enough for Kim Kardashian and Kanye West, or at least she thinks so, since she just spent a fortune on a gorgeous home there — one with a supermodel past. The 7,400-sq-foot estate sits on a well-protected bluff overlooking the Pacific, and the Mediterranean style mansion has 4 bedrooms, 5.5 bathrooms and an endless number of killer views. KK spent a reported $70 million for the spread — which includes lots of outdoor spaces for entertaining, dining or swimming. The previous owner is Adam Weiss, a Silicon Valley hedge fund manager, who paid $45 mil when he bought it from Cindy Crawford just 4 years ago. It’s about 14 miles up the coast from the $57 million home Ye is currently remodeling.

Tom Hardy, the star of “Venom”, “The Dark Knight Rises”, and “Mad Max: Fury Road”, has proven his combat skills are not screen-made, with an impressive victory in a real-life martial arts competition. On Saturday, he entered the UMAC Milton Jeynes Brazilian Jiu-Jitsu Open in the UK. Not only did Hardy compete, but he won first place in his division, putting him at a high-level Blue Belt, which is the 2nd ranking color out of five, with Black Belt being the highest. One of his opponents admitted to feeling a little star-struck when he saw who he would be fighting, but said Hardy told him, “Forget it’s me and do what you would normally do.”

It might not something that you were holding your breath for, but Roseanne Barr is coming back. The Fox Nation streaming service has announced that she’s making a return to the comedy stage with a brand-new special set to air next year. “A Roseanne Comedy Special” will mark her first stand-up special since “Roseanne Barr: Blonde N Bitchin’” aired on HBO in 2006. The streamer said the one-hour special “will feature Ms. Barr’s signature comedic take on a variety of topics, with no subject off limits.” Barr was fired from the reboot of her classic ’90s sitcom “Roseanne” in 2018 after tweeting a racist comment.

If you don’t have a tattoo, and are afraid to get one because you don’t like needles, I’ve got good news for you. Scientists have developed a way for you to get a permanent tattoo without going under the needle. The new technology is in the form of a skin patch that has microneedles smaller than grains of sand. While it still technically uses needles, these ones are microscopic and are said to be painless and bloodless. The microneedles can be arranged into different designs, words, symbols, etc. — to create the ideal custom tattoo. And as a bonus, they can even be made to respond to environmental factors including light or temperature changes. Using skin patches is a quicker process, too. The patch is pressed onto the body — similar to how one would apply a temporary tattoo — and the microneedles dissolve, leaving the ink to sink into the skin a few minutes later. They can even be self-administered — no tattoo shop required.

The NHL’s Toronto Maple Leafs have been the recipients of some old-fashioned chirping from the online community as a result of the new ads the team will be sporting on their jerseys for the upcoming season. Announced by the team on Tuesday, every Leafs player will be wearing the logo of the Dairy Farmers of Ontario – a stylized “Milk” on the upper chest area — whenever they take the ice. With such an out-of-left-field sponsorship, it was a too-good-to-be-true opportunity for jokesters across the hockey world to get another jab in at the team famous for underperforming in the playoffs. One commenter reposted a pic of the newly-designed shirts with the caption: “Nothing spoils in the summer like milk”. Sports TV personality Sid Seixeiro wrote: “The Leafs new “Milk” sponsorship is going to look hilarious on the nights they only give 2% effort.” One posted: “like if you’re Leafs intolerant”, and another posted a pic of a bag of 1% milk beside a bag of 2%, with the caption: “Leafs cup chances”. LINK: https://tinyurl.com/y7yfyvz4

Non-violent attempts to escape Mexican prisons are not punished because “it’s human nature to want freedom.”

Electric cars were introduced in 1896, and by the end of the century, almost 50% of cars worldwide were electric.

A car traveling 100 mph (160 km/h) would take more than 29 million years to reach the nearest star, aside from our Sun.

Question: One in 4 women admit they have cried HERE. Where?

If you’ve got a teenager, I’m sure you’ve heard him/her say they “can’t live” without the new iPhone 14. But in Laos, a small country bordering China, apparently some are willing to live with one kidney in exchange for a new iPhone. And it has brought a huge wave of concern. A viral image posted by a beauty clinic shows a group of people holding up their new iPhone, while displaying their “surgical scars”, after supposedly selling their kidneys in return. Many believed the photo to be real, however, it has been reported that the clinic, Dr. Nith Beauty Center, used the images as a marketing gimmick. Thai Red Cross Organ Donation Center has condemned the stunt, calling it “immoral”, and pointed out: “There is no organ trading like this. It’s prohibited.” The iPhone 14 retails for ($1,250-$1,940), while Thais earn $343 minimum wage a month. LINK: https://tinyurl.com/4m6xzv4u

There are just some movies that, for whatever reason, you can watch again and again and still love…

☞ “Casablanca” (1942): Maybe you’ve never seen this classic. “It’s old!” “It’s in black and white!” Put your concerns aside and give it a shot this weekend. Bogart and Bergman are awesome, and the film is one of the finest ever made.

☞ “The Sandlot” (1993): Aside from that stupid chase scene that just goes on forever…this could be the perfect kids film. It’s genuinely funny, touching and timeless. And people of any age can enjoy it, because it’s so relatable.

☞ “Star Wars – A New Hope IV” (1977): For some, any (or all) Star Wars films could make this list. But this is the original. We easily take for granted how ingeniously complex a world – or galaxy! – they created back in the late ’70. The movies were groundbreaking, and a lot of fun.

☞ “The Big Lebowski” (1998): Not only is it the perfect film to watch again and again because its plot is actually rather complex, it also features some of the best characters ever. You could watch The Dude, Walter and Donny discuss paint drying and it would be amazing.

☞ “The Shawshank Redemption” (1994): Why is it so endlessly watchable? Well, it was adapted from a novella by none other than Stephen King, it’s a simply compelling story, it was directed by 3-time Oscar nominee Frank Darabont. And it stars Morgan Freeman and Tim Robbins. That pretty much does it.


When you go into court you are putting your fate into the hands of twelve people who weren’t smart enough to get out of jury duty. - Norm Crosby
GOOD NEWS: Brought to you by RadioTravelGroup.com