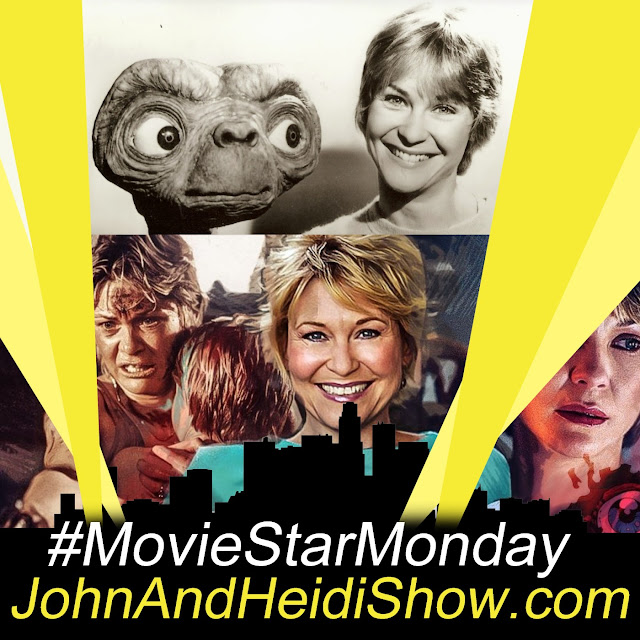 This #MovieStarMonday we visit with Dee Wallace (ET, The Hills Have Eyes, Cujo, The Howling and many more)

We'll talk about her new film NIX, available now on all major digital platforms. A psychological horror film inspired by Germanic folklore, the story of Nix follows a tragedy at a mysterious lake and its frightening consequences as a shattered family unravels the truth. It is a horror/thriller from director Anthony C. Ferrante (director of all the Sharknado films) AVAILABLE NOW - https://amzn.to/3e91hoy

Dee won "Best Actress" at the Downtown LA Film Festival for her performance in NIX.

National Walk to a Park Day

What part of the day do you look forward to most? That first coffee? Quitting time? Dinner? Your favorite TV show? It would seem none of the above. According to a survey, for 4 in 5 of us, it’s coming home to our furry friends. In the poll of 2,000 US pet owners, 71% also said they regularly put their pet’s needs before their own. Conducted by OnePoll on behalf of Chewy, the survey aimed to uncover the degree to which pet parents prioritize their pets’ happiness when making major life decisions and planning their daily activities. And do we ever! Pets were found to influence what trips they take (40%), where they live (37%) and the people they hang out with (35%), and 36% admitted their pet even impacts how they spend money. Nearly half said they plan their free time around being with their pet – so much so that 39% would rather cancel plans to spend more time with their pet. And almost two-thirds (62%) of respondents have gotten another pet for their pet.

People would pay 108% more than the listed cost of any item they’re shopping for, if it were to last 20 years, according to a new survey. Three in 5 respondents said they’re more inclined to spend money on quality items than something that’s cheaper both in price and quality. Examples of some things that people agreed are always worth paying more for, provided they last longer than average, included cars (34%), kitchen appliances (34%), cookware (30%), TVs (28%) and phones (26%).

Gwyneth Paltrow is showing off her birthday suit. The Goop founder stripped down and got slathered in metallic body powder for a “Goldfinger”-inspired nude shoot in honor of her 50th birthday Tuesday. In a press release, Paltrow said: “I feel so good turning 50, and this is about expressing that sense of energy and optimism that I’m experiencing.” Photographer Andrew Yee snapped the stunning pics, while celebrity makeup artist Lottie was tasked with turning Paltrow into a “golden goddess.” And how was that accomplished? She says she applied “piles of gold powder” to Paltrow’s face and body, after “[making] sure the skin…was very, very moisturized” — using products from Goop, of course.

Kelly Ripa says working with former “Live” co-host Regis Philbin “was not a cakewalk”. In this week’s “People” cover story, she discusses her new book, “Live Wire: Long-Winded Short Stories.” Ripa, who worked with Philbin from 2001-11, after replacing Kathie Lee Gifford, said that the pages about her dynamic with Philbin were “the hardest chapter” for her to write. She said “There were good and bad days,” and doesn’t “want to feel like I’m slamming anyone or that I’m being disrespectful”, but also said it “took years to earn my place there and earn things that are routinely given to the men I worked with. Including an office and a place to put my computer.” Philbin died in 2020 at age 88.

TV icon Katie Couric is battling breast cancer. In a post on her website, The 65-year-old former “Today” show anchor shared she was diagnosed in June. Cancer is no stranger to Couric. She lost her first husband, Jay Monahan, to colon cancer in 1998. Her sister died from pancreatic cancer and her mother-in-law died from ovarian cancer. She wrote: “Given my family’s history of cancer, why would I be spared? My reaction went from, “Why me? to Why not me?” She underwent surgery in July and started radiation treatment early this month. She also reminded readers that “we need to stay on top of our screenings, advocate for ourselves, and make sure everyone has access to the diagnostic tools that could very well save their life.”

For those concerned about their personal information appearing online (and that should be everybody), you’ll be happy to know that Google is releasing a tool that makes it easier to remove search results containing your address, phone number and other identifiable information. The “Results About You” feature is described as a way to “help you easily control whether your personally-identifiable information can be found in search results.” If you see a result with your phone number, home address or email, you can click on the three-dot menu at the top right, then click the new “Remove result” option. There, you’ll be informed that if the result contains one of those 3 things, Google “can review your request more quickly.” You can then monitor the request in a new menu item in the Google app called “Results About You”. So far, the new feature has only rolled out to limited users in the US and Europe. In the meantime, you can remove other personally identifiable information from Google Search via a removal request.

Are you ever reluctant to ask others for help? Why? Fear of rejection? Fear of imposing? Well, new research shows that we should go ahead and ask. A study, published in the journal Psychological Science, suggests many of us underestimate how willing — even happy — others are to lend a helping hand. Six experiments were conducted, involving more than 2,000 participants — all designed to compare the perspectives of those asking for help with the perspectives of helpers. Across all of the experiments, those asking for help consistently underestimated how willing friends and strangers were to assist, as well as how good the helpers felt afterward. The researchers believe those miscalibrations might stand in the way of people’s asking for help. The bottom line, according to the co-author of the study, is: “We feel good making a positive difference in other people’s lives. Helping makes people feel better.”

The British Pound is the world’s oldest currency still in use, at 1,200 years old.

Before the switch to digitization, a 2-hour movie used about 2 miles of film.

Amber-colored rear turn signals are statistically proven to reduce collisions by about 28%.

The shortest complete sentence in the English language is: “Go”.

Question: 13% of us have done THIS at some point in our driving career. What is it?

Answer: Driven off without replacing the gas cap

Spam is cool again. The 85-year-old canned block of meat has undergone a cultural reinvention. Manufacturer Hormel has sold a record amount for 7 straight years, and 2022 is on pace for another milestone. Spam is a trending ingredient on TikTok and on the menu at some fine-dining restaurants. Why? How? Spam’s popularity in Hawaiian, Asian and Pacific Island cuisine has influenced its growth. As more immigrants arrived in the US, and ethnic cuisines entered the mainstream, the slab of cooked pork that has long been stigmatized as fake meat, has spiked in popularity. Edgy ad campaigns also have attracted a broader customer range than the Baby Boomers who grew up eating it, sometimes reluctantly. What’s more, according to Robert Ku, an associate professor of Asian and Asian American studies at Binghamton University, “A lot of celebrity chefs have been Asian and Asian American, and reintroduced Spam to a new audience.”

• Complains every 2 minutes that he is “dying” but never actually does.

• Inability to do anything for himself…

• …He can, however play video games.

• Sneezes that make the earth tremble.

• Can still go to weekend football game despite being on deathbed all week.

• Confuses wife with his Mommy.


I dream of a better tomorrow, where chickens can cross the road and not be questioned about their motives. - Ralph Waldo Emerson

Mother And Toy Store Staff Brought To Tears By Act Of Kindness
https://www.sunnyskyz.com/good-news/