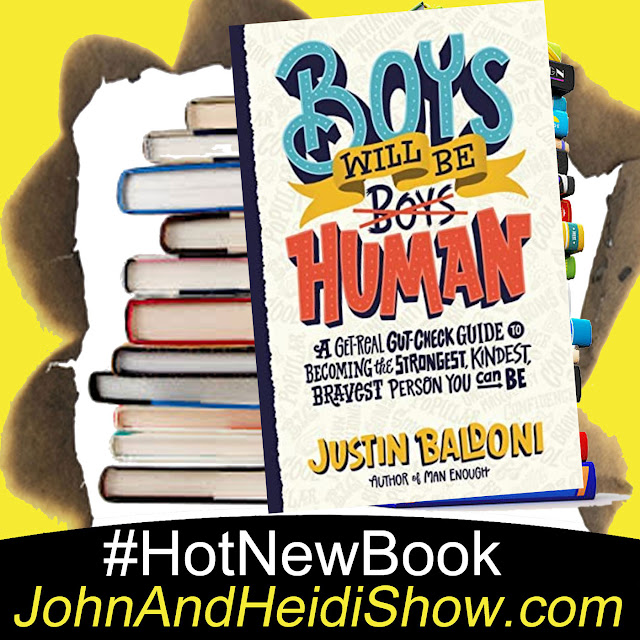 Today we visit with Justin Baldoni about his new book “Boys Will Be Human” - https://amzn.to/3V7fRO5


While we’d all love to stay in the “honeymoon” phase of our relationship forever, a new study finds stress can make even the most loving couples only focus on their partner’s most annoying habits. Researchers at University of Texas at Austin say ongoing stress causes men and women to become more critical of their partner’s negative behavior. These unpopular acts can include anything from a spouse breaking a promise, showing anger or impatience, or criticizing their partner. The team reported that people who experienced stressful life events outside of their relationship, such as problems at work, were “especially likely to notice if their partner behaved in an inconsiderate manner.” The results of their study of 79 newlywed couples show a single stressful day is not enough to cause couples to nitpick their partner’s bad habits. But a long-term buildup of stress does cause them to focus more on their lover’s inconsiderate behavior.


NASA has come up with an interactive map that allows budding astronauts to experience the sights and even the sounds of Mars. Users can “hike” across and around the red planet’s Jezero Crater using Virtual Reality, a laptop or their phone, and if they stand beside the Mars Rover, they can even hear it working. The map encompasses the areas surrounding the landing site of NASA’s Mars 2020 Perseverance rover. Views can be taken in from large scales to centimeter-close detail. Users can also traverse steep slopes and stand on top of the Mars rover at ground level – just like street view in Google Maps – and stare across the surrounding desert landscape. LINK: https://tinyurl.com/k445cbxx

Amber Heard and Johnny Depp’s legal battle is headed to the small screen. Nearly 4 months after the jury came to a verdict in the “Pirates of the Caribbean” star’s defamation trial against the “Aquaman” actress, Tubi has released the trailer for the upcoming Sara Lohman-directed movie “Hot Take: The Depp/Heard Trial.” The one-minute clip features scenes recreating the infamous trial—including parts of both Depp and Heard’s testimonies, as well as the scrutiny she received on social media. The film stars Mark Hapka and Megan Davis as the former couple, with Melissa Marty playing Depp’s lawyer Camille Vasquez, and Mary Carrig as Heard’s attorney Elaine Bredehoft. Hot Take: The Depp/Heard Trial hits Tubi today. LINK: https://tinyurl.com/yydwxa8j

“The Sopranos” has been named the best TV show of all time. Rolling Stone unveiled its list of the top 100 television shows, calling the New Jersey-set HBO mob drama an “undisputed champion” due to its “86 medium-transforming episodes.” The Sopranos ran between 1999 and 2007, starring James Gandolfini as ‘Tony Soprano’. The rest of the top-5, in order, are: “The Simpsons,” “Breaking Bad,” “The Wire” and “Fleabag.”

Although he has starred in at least 85 films throughout his glittering career, won 2 Best Actor Oscars, 7 Primetime Emmys and a Presidential Medal of Freedom, Tom Hanks thinks only 4 of his movies are “pretty good.” He made the revelation to People while promoting his debut novel “The Making of Another Major Motion Picture Masterpiece,” set for release next May. Quote: “I’ve made a ton of movies, and 4 of them are pretty good, I think, and I’m still amazed at how films come together. From a flicker of an idea to the flickering image onscreen, the whole process is a miracle.” Hanks did not divulge which films he considers “pretty good”.

There are now more marijuana dispensaries in Colorado than McDonald’s Restaurants.

Did you Know? Apple’s “i” prefix before their product names stood for 5 things when Steve Jobs introduced the iMac in 1998: Internet, Individual, Instruct, Inform, and Inspire.

According to a 2015 study, less than half the world’s cultures kiss romantically.

All the paint on the Eiffel Tower weighs the same as 10 elephants.

Pineapples, bananas, watermelons, pumpkins, and avocados are all berries.

Geckos can turn the stickiness of their feet on and off at will.

Question: The average worker says THIS phrase approximately 3 times per week. What is it?

Answer: “I need a vacation!”

McDonald’s restaurants in the US are now selling Adult Happy Meals — complete with a free toy. The Cactus Plant Flea Market Box is a collaboration between McD’s and the famous streetwear brand, and features either a Big Mac or a 10-piece Chicken McNuggets, as well as a soda and fries. Inside will also be “one of 4 collectible figurines” of McDonald’s mascots Grimace, the Hamburglar and Birdie, as well as a Cactus Buddy. The meals will be available through Oct. 30.

If there is one common human experience, it’s getting the lyrics wrong in a song. Someone in a Reddit community asked the question: “What’s a song lyric that you completely misheard for a while?” The answers did not disappoint…

• “Dido. ‘White Flag!’ I was singing for years: “I will poke my eyes out and surrender” (rather than “I won’t put my hands up and surrender”).

• “I got shoes, they’re made of plywood.” The correct words in the “Grease” song are: “I’ve got chills, they’re multiplying”

• And perhaps least understandably of all, someone apparently spent a sizeable portion of their life singing “Pour Some Shook-Up Ramen” rather than “Pour Some Sugar on Me”.

I know that there are people who do not love their fellow man, and I hate people like that! - Tom Lehrer

A Boy With Cancer Asked To See Monsters. 1,000 People Showed Up In Costumes
https://www.sunnyskyz.com/good-news