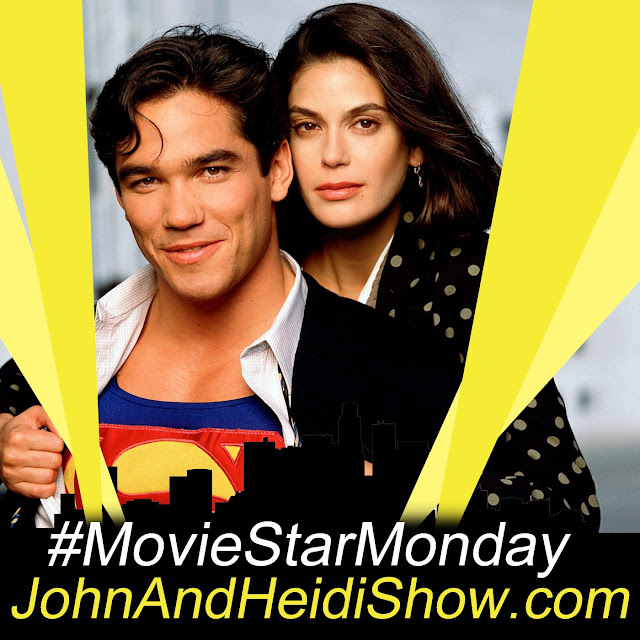 This #MovieStarMonday we visit with Dean Cain, known for his role as Clark Kent/Superman in the television series Lois & Clark: The New Adventures of Superman in addition to several films, including The Broken Hearts Club (2000), Out of Time (2003) and Bailey's Billions (2004). In 2004, he portrayed Scott Peterson in the fact-based made for television movie The Perfect Husband: The Laci Peterson Story. He has also appeared in a recurring role as Casey Manning in the television series Las Vegas. Cain guest-starred in a seventh season episode of Smallville as the immortal Dr. Curtis Knox. He's #33 on VH1s 40 Hottest Hotties of the 90s. Cain has also made an appearance in the comical Internet Explorer 8 commercials.

We will visit about he latest movie "Paul's Promise"... in theaters now! The film chronicles Paul Holderfield, Sr.'s life, who was raised poor and knew what it was like to go to bed hungry and hear his mother pray at night for food for her children.

In the 1950's, during the Little Rock Central High School crisis, Holderfield was a North Little Rock fireman and remembers turning his back on a Black man, hoping he would not recognize him, but he did. His childhood best friend Jimmy Lipkin approached Paul for a handshake, but Holderfield put his hands in his back pockets and refused to shake Lipkin's hand.

Later convicted by his actions, Holderfield told his wife Barbara that he would never again treat a human being that way. Ultimately, Holderfield started Friendly Chapel and F.L.A.M.E. (Feeding and Loving All Men Equally) to help others and spent the rest of his life giving back to anyone in need.

If your teen never seems to get enough sleep, researchers from Rush University Medical Center have 2 suggestions: teach them strong time management skills, and try bright light therapy. In a study, teens underwent bright light therapy, a treatment for sleep disorders with a goal of “resetting” the circadian clock and helping teens wake up earlier, and fall asleep earlier at night. Next, they learned how to better address and navigate barriers to an earlier bedtime, like limiting after-school activities. Ultimately, researchers were able to shift the teens’ bedtime by an hour and a half. Total sleep time also increased by about an hour.

Britain’s weirdest Halloween attraction is a salvage yard that’s been transformed into a graveyard featuring 15,000 mannequins. Roz Edwards set up her business buying and restoring dummies, then selling them to stores and hiring them out for TV shows. But when people began telling her how creepy her bizarre collection of mannequins was, she decided to open it up for Halloween. Last year she transformed the site into a ghoulish cemetery scene. This year? An immersive Clue-style game experience. Visitors pay $17 for the horror walk, during which they have to solve clues to figure out which suspect is behind a grisly murder. Photos show limbless mannequins and random body parts scattered across the site, plus dummies arranged in sinister poses, with some dressed up as terrifying clowns and other eerie characters.


“Saturday Night Live” is continuing the trend of having its host also be the musical guest. It’s been announced that rapper/singer Jack Harlow will do double-duty on the Oct. 29 show. That comes after the successful star turn this past weekend of Megan Thee Stallion as host and musical guest. Harlow will be making his SNL hosting debut, but it will be his second time as musical guest. He recently garnered songwriter of the year honors at the SESAC Music Awards and Song of the Summer honors at the MTV Video Music Awards, one of 4 awards he won that night. He’s also booked to star in the “White Men Can’t Jump” remake.

The dog that opened a can of worms with Sylvester Stallone and Jennifer Flavin is now a full-fledged member of the family. Reportedly, Dwight is not only living with the family in Hidden Hills, but Flavin now really likes the pooch. When the couple’s marital woes first surfaced in August, it was reported that she didn’t want another dog, especially a large Rottie, but Sly prevailed and brought Dwight home. That became a source of conflict, especially when he covered up a tattoo of Jennifer on his arm and replaced it with Dwight. Now, it appears all is forgiven. The divorce petition has been dropped, the family is fully back together, and Sly, Jennifer and 2 of their daughters even posed for a happy picture at a Ralph Lauren fashion show Thursday night.

James Corden is welcome at New York City’s Balthazar restaurant again. Owner Keith McNally said the late-night talk show host apologized to him after McNally slammed Corden for his alleged behavior in the restaurant. Alongside a photo of Corden on Instagram, McNally wrote: “James Corden just called me and apologized profusely. Having f—ed up myself more than most people, I strongly believe in second chances.” He had called out “The Late Late Show” host for his alleged behavior at Balthazar’s New York location and at Cafe Luxembourg, calling him “A hugely gifted comedian, but a tiny Cretin of a man. And the most abusive customer to my Balthazar servers since the restaurant opened 25 years ago.” In his newest post, McNally continued: “Anyone magnanimous enough to apologize to a deadbeat layabout like me (and my staff) doesn’t deserve to be banned from anywhere. Especially Balthazar.”

A teenager was caught stealing Gummy Bears from a Texas drugstore.

A report claims that you can save about $750 a year on food by becoming a vegetarian.

Rapper Lil Zay Osama was arrested after leaving a loaded Glock handgun in an Uber.

One of the hottest apps out there right now is the result of someone coming up with a CRAZY social media concept: People actually saying nice things to each other. “Gas” is a question-and-answer app aimed at teenagers, that, upon its release in August, became the top downloaded social media app in the Apple App Store…even though it was only available in 12 states. Gas users anonymously answer multiple choice poll questions, like “Who is most likely to dress up as the poop emoji for Halloween?” and “(Who) Bodies every new sport they try,” which feature their friends as the answer options—the app calls this getting “gassed up.” App users collect coins for answering poll questions, which allow them to unveil who answered certain questions about them. There is no ability to direct message other users. According to the app’s developers, Gas’s mission is to “create a place that makes us feel better about ourselves.”

It would take about 33 million people holding hands to form a ring around the equator.

The victim was in hospital for 16 months afterward.

Mayonnaise is an excellent skin moisturizer.

Question: 50 people listed on the Forbes list of 400 richest people own one of THESE. What is it?

Just in time for the start of the NHL season, kids can now be the proud owner of…their very own Zamboni! The “Kool Karz NHL Zamboni Ride-On Toy”, is a collaboration between the NHL, the Zamboni company and the Kool Karz Playground company, making rideable replicas of the ice resurfacing machines for kids aged 3-8. The league says the new toy allows kids who are “mesmerized” by the machines to “resurface around the house, in their driveway, and at their local street hockey rink or…playground.” The 22 lb. (10kg) “authentic replica” features the Zamboni machine’s unique horn sound, and has working headlights, a Bluetooth speaker and a “snow collection tank” for storage. The logos of each of the 32 NHL teams can also be emblazoned on it. List price: $399 Cdn. LINK: https://tinyurl.com/2ea6w8ze

1. “House of the Dragon”: “Games of Thrones” definitely inspired thousands of ‘Daenerys’ and ‘Jon Snow’ knock-offs, and now the spin-off is giving fans a chance to get creative again.

2. “Stranger Things”: Whether it’s ‘Max’, ‘Eddie’, or the demon ‘Vecna’, dressing up as one of the characters from Netflix’s mega-hit won’t disappoint. 80s fashion paired with terrifying supernatural forces — what’s not to love?

3. “Bridgerton”: Everyone loves a good period piece. Dress up in a dramatic ball gown to channel the lovable and powerful heroine, ‘Kate Sharma’.

4. Beyoncé ’s ‘Renaissance’: For modern-day cultural relevance, it doesn’t get much better than Bey. While this costume is on the high-maintenance side, if you pull it off, it’ll be one for the ages.

5. Barbie & Ken: They’ve always ranked high as popular Halloween costumes, but this year you can take it to a new level after seeing the trailer for the 2023 “Barbie” movie.

Everyone has a purpose in life. Perhaps yours is watching television. - David Letterman

UC Berkeley Professor To Award $1,000 Each Month For Act Of Kindness
https://www.sunnyskyz.com/good-news