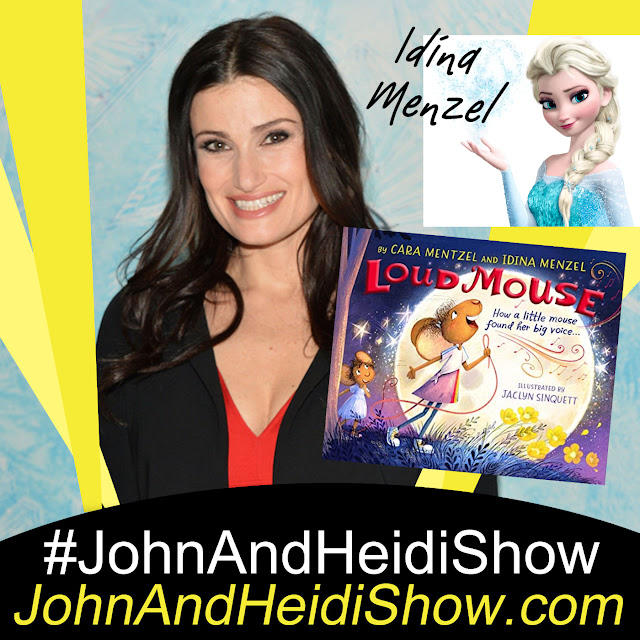 Today we visit with Idina Menzel (the voice of Elsa on Frozen... and much more) and sister Cara Menzel (an amazing school teacher) who worked together to create a fun new children's book “Loud Mouse” - https://amzn.to/3fOcBqw

Sunglasses – they’re not just for summer. And neither is sunscreen. Yet, despite this, in a survey, 39% of people mistakenly believe sunglasses are only needed in the warmer months. 2,000 Americans were polled about their awareness of how to take protective measures to keep their eyes and body safe. While 72% percent of respondents said they’re most careful in the summer, just 68% claim they take protective measures EVERY time they go outside – even if for a short period of time. 64% said they know it’s important to wear sunglasses even when it’s cloudy. When it comes to their daily dose of sun, a third (34%) didn’t know they shouldn’t be spending more than the recommended 30 minutes outside in the sun every day. And nearly half admitted they don’t always wear sunglasses when driving during the day, and only 25% knew that yard work has an effect on their eyes too.

What’s the best way to maintain peak brain health as we age? Scientists in Norway sought to simplify the countless studies on preventing cognitive decline, and condensed them to 3 recommendations: Physical exercise, social activity, and passionate interests and hobbies. The study was published in Brain Sciences.

“Monster — Dahmer: The Jeffrey Dahmer Story,” the limited drama series starring Evan Peters as the infamous serial killer, has debuted atop the Netflix Top 10 English TV list with 196 million hours viewed, making it the most-viewed title this week. Only “Squid Game”, “All of Us Are Dead”, season 4 of “Stranger Things” and season 2 of “Bridgerton” have beaten it in the period since the streamer changed the way it reports ratings figures in June 2021. Released Sept. 21, Dahmer has sparked questions on social media concerning the ethics of dramatizing the real-life story for entertainment purposes, with the victims’ family members saying it is “retraumatizing” them.

If your stomach can handle it, here’s your chance to own one of the most iconic props from “The Walking Dead” — Negan’s barbed wire-wrapped bat, ‘Lucille’. The bat has been at the center of some of the series’ most shocking moments, and now it’s available at Goldin Auctions, with an opening bid of $3,000, but it’ll sell for much more. If you watch TWD, you know Lucille. During the season 6 finale/season 7 premiere, ‘Glen’ one of the show’s most beloved characters, was brutally killed by Lucille … at the hands of Negan, played by Jeffrey Dean Morgan. Other iconic TWD props up for auction include Daryl’s 1992 Honda Nighthawk motorcycle and Rick’s (rubber) Colt Python stunt gun. The auction wraps Oct. 15. The Walking Dead, which premiered in 2010 — will air its series finale in November.

Queen Elizabeth II might have been one of the most complex, dynamic and beloved figures of the 20th century, but her death certificate is oddly simple. The queen’s just-released death certificate says the 96-year-old monarch died of “old age”. That’s it. Typically, a death certificate contains a more technical description of one or more conditions leading to a person’s death. The document, published by National Records of Scotland on Thursday, states that Elizabeth died at Balmoral Castle in Ballater, Scotland on Sept. 8 at 3.10 p.m. The document was signed by the queen’s daughter, Princess Anne.

A Homecoming dance had to be postponed after bats were found in a California high school gym.

In the aftermath of Hurricane Ian, Florida has been declared a major disaster area.

Volvo invented the 3-point seatbelt, then decided it was too important to keep to itself, and made it available for free to other automakers.

In 2005, Connecticut accidentally issued an emergency alert to evacuate the entire state. Only about 1% of people actually tried to leave.

It cost $7.5 million to build the Titanic…and $200 million to make the movie.

Sure, tipping is a part of our everyday lives – in return for good service. But TikTok users are saying it’s gone too far after an audacious ask from an online furniture store. TikTok’er @spookyweiner shared a shocking discovery she made while making a purchase — a payment page which asked if she would like to tip the company. She explains: “I’m purchasing an office chair online, and they’re asking me if I want to leave a tip.” The image behind her shows a screenshot of her online checkout process, asking if she’d like to leave a tip for the “team,” giving options to leave a 1% tip of $2, 3% tip of $6, or 5% tip of $10. LINK: https://tinyurl.com/y3u6m842

Sure, we like to think we have some pretty cool expressions here. But it turns out they’ve come up with some pretty catchy ones in other places, too…

⇒ Attaccabottoni (Italy): “Buttonholer” – someone who corners casual aquaintances or even strangers in order to tell them their miserable life story.

⇒ Modre Pondeli (Czech): “Blue Monday” – When you skip work to give yourself a 3-day weekend.

⇒ Tartle (Scotland): To momentarily forget the name of the person you’re talking to.

⇒ Mokita (New Guinea): The truth that everyone knows, but no one will speak about.

⇒ Gorrero (Spain, Central America): Someone who never picks up the check.

⇒ Backpfeifengesicht (Germany): A face that’s just begging for somebody to put their fist in it.

When Bryan Tsiliacos turned 29, he decided to channel his anxieties about his approaching 30th birthday into something good. The San Francisco resident says he decided to write down all the things he was grateful for, and at that moment, realized that every wonderful thing that has happened to him was “thanks to the support and generosity of others.” To pay it forward, he decided to complete 30 acts of kindness before turning 30 next year. Thus, the “30 Acts by 30” challenge was born. So far, among his random acts of kindness, he has made more than 400 desserts for firefighters in San Jose, and arranged donations of 150 supply kits for middle schools in Oakland, where about $12,000 worth of supplies were donated by 18 sponsor companies. Tsiliacos has been documenting his acts of kindness on social media, and hopes others will be inspired to give back as well. Follow @30actsby30 on Instagram for updates.