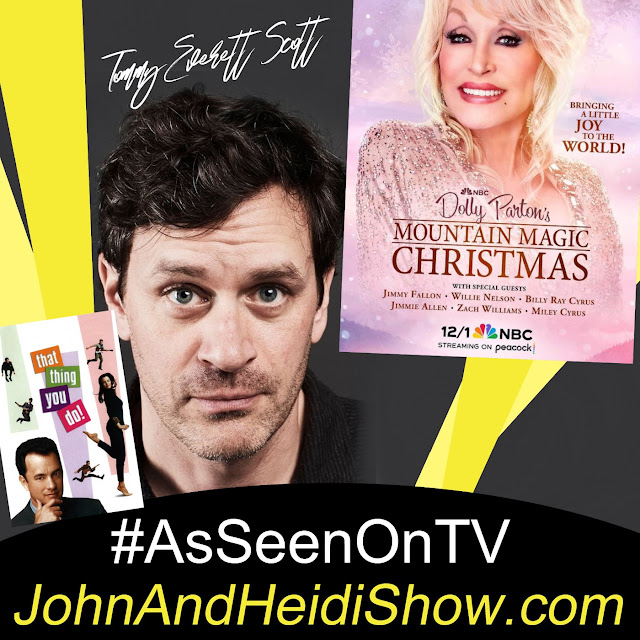 Today we visit with Tommy Everett Scott (That Thing You Do) about his fun career on TV and in movies. His latest project is on NBC TV and the Peacock Network App. Dolly Partons Mountain Magic Christmas. https://www.peacocktv.com/

People’s headaches are getting worse, and a new study says climate change may be to blame. According to researchers from the American Academy of Neurology, global warming is fueling a rise in neurological diseases ranging from migraines to Alzheimer’s. People with Parkinson’s and multiple sclerosis may also experience worsening symptoms, and strokes may become more prevalent as the planet heats up. The team notes that global warming causes air pollution, which has been linked to worsening brain health due to tiny toxic particles called particulate matter, which enters the bloodstream after being inhaled, eventually traveling to the brain.

There is no significant link between childhood phone ownership and kids’ well-being, according to new research out of Stanford University. Researchers followed more than 250 children from low-income families for 5 years, to track their well-being as they transitioned to phone ownership. They found the age at which kids received their first phones had no meaningful impact on their grades, sleep habits or depression symptoms. Whether or not the children in the study had a mobile phone, and when they got their first mobile phone, did not affect their well-being, according to lead author Xiaoran Sun. As a result, “There doesn’t seem to be a golden rule about waiting until eighth grade or a certain age” to allow your child to get a smartphone.

Sylvester Stallone and Arnold Schwarzenegger may be pals now, but they didn’t used to be so friendly. Stallone told ETCanada about how he and Schwarzenegger once saw each other as “competition.” Quote: “We were so adversarial. I used to dream about beating him up and he used to dream about punching me out too. That’s his nature and that’s my nature and I’m not trying to make light of this.” The “Rocky” star said that his one-time nemesis got to where he is today because he knew how to “psyche out the competition”, and “backed it up with hard work”, and added that they were like “two boxers” who “brought out the best and worst of each other.” Stallone says that these days, Schwarzenegger likes to text him and ask if he wants to grab coffee.

Cher says that “love doesn’t know math” when it comes to her relationship with Alexander Edwards. She recently confirmed she is in a relationship with her 36-year-old boyfriend – who is 40 years younger than her – and while she admits the age gap definitely exists, she doesn’t think it’s an issue. She tweeted: “On paper This Looks strange (Even 2 ME) A.E Says Love Doesn’t Know Math.” Then, she added: “We’re grownups.” Cher previously dated Tom Cruise with whom she had a 16-year age gap.

Will Smith has acknowledged that his fans may not be “ready” to watch him on screen in the upcoming drama “Emancipation.” The movie is his first project following his controversial slapping of Chris Rock at the Oscars earlier this year. During an interview on the show “Good Day DC,” Kevin McCarthy asked Smith what he “would tell people who say ‘I’m not ready’ ” to watch him again. His answer: “I would absolutely respect that and allow them their space to not be ready. My deepest concern is my team – [director Antoine Fuqua] has done what I think is the greatest work of his entire career.” Smith elaborated, saying that his “deepest hope” is that his actions don’t “penalize” his team. The film stars Smith as a runaway slave named ‘Peter’ who finds asylum in Louisiana and winds up joining the Union Army. “Emancipation” will premiere in theaters Dec. 2, and on Apple TV+ on Dec. 9.

This’ll be interesting: A new Netflix series can be watched in any order, and it’ll give you a completely different viewpoint on the story, depending on in which order you watch the episodes. The non-linear anthology series “Kaleidoscope” is about a heist, and features 8 episodes, each named after a color. The series follows a team of masterful thieves over the course of 25 years. They attempt to break into a seemingly unbreakable vault to get their hands on what might be the biggest criminal payday in history. The usual “heist hijinks” ensue, but of course, the interesting thing is that Kaleidoscope offers a “unique immersive experience”, where you can start with any episode, and you’ll still be left with a story that makes sense. According to executive producer Russell Fine, “All the information is there to be able to connect the dots and know the story”, but you’ll have a different viewpoint on what’s happening, depending on the order you watch them. Kaleidoscope, starring Giancarlo Esposito of “Better Call Saul”, debuts Jan. 1 on Netflix.

The 10th largest pyramid in the world houses a Bass Pro Shop, in Memphis TN

Most people’s bodies consist of enough fat to make 7 bars of soap.

Originally, the Eiffel Tower was going to be erected in Barcelona, but the project was rejected because citizens thought it would be an eyesore.

A snail can sleep for 3 years.

It would take 1.2 million mosquitoes biting you simultaneously to drain all your blood.

There is no speed limit for bicycles in the United Kingdom, but you can be charged with ‘cycling furiously’.

The oldest word in the English language is ‘town’.

Question: Nearly 25% of households do THIS in the bathroom. What is it?

Answer: Decorate it for Christmas

A UK mom seemed to get stuck in a time warp as she showed up in the exact same spot twice on Google Street View – in photos snapped almost 10 years apart. Leanne Sarah Cartwright is seen clutching shopping bags in her right hand as she stands near a traffic light at an intersection on Victoria Place in Carlisle. The first snap was captured in April 2009 and the second in August 2018, according to Kennedy News and Media. In the earlier Google Maps image, she is wearing a jacket over a white shirt and slacks, while in the second she has on a black dress with her left hand resting on her hip. The display window of the store behind her, as well as some signs along the adjoining sidewalk, have changed in the intervening years – but everything else is remarkably similar. https://nypost.com/

WHYZITS: (left over from yesterdays)

• Whyzit if you run into a man that smiles all the time he’s probably selling something … something that doesn’t work?

• Whyzit when you talk about marriage, these 2 words always come up — ‘commitment’ and ‘institution’?

• If crime doesn’t pay… does that mean my job is a crime?

• Do fish get thirsty?

• If nobody buys a ticket to a movie, do they still show it?

• How do you know if honesty is the best policy unless you’ve tried some of the others?

• If you have a cold hot pocket, is it just a pocket?

• If you pamper a cow, do you get spoiled milk?

• What happened to Old Zealand?

• How did Walt Disney figure out how to make people pay to stand in lines all day and then come back for more the next day?

• How do you get off a nonstop flight?

A day without sunshine is like, you know, night. - Steve Martin