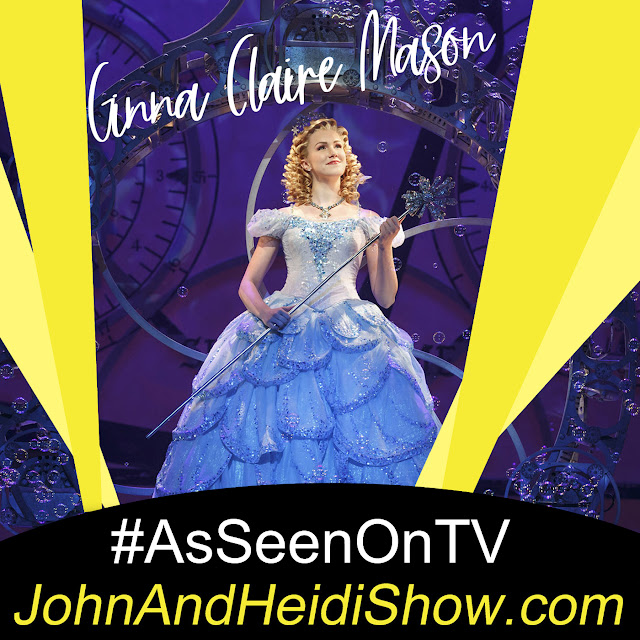 Today we visit with Ginna Claire Mason,(Wicked, Newsies, Flashdance and Hairspray) who stars in The Hallmark Channel’s original new movie, A Holiday Spectacular, also starring Oscar nominee Ann-Margret and The Brady Bunch’s Eve Plumb. Set in 1958, A Holiday Spectacular stars Ginna as a Philadelphia heiress named Maggie who puts her high-society wedding plans on hold to sneak up to New York City and make her secret dream come true: dancing live on stage in the Christmas Spectacular at Radio City Music Hall. Unbeknownst to her family, Maggie is living a different life and falls in love with New York and dancing with the Rockettes – and later, a young U.S. Navy photographer name John. Can Maggie find the courage to tell her family what she wants for her future instead of accepting the future that was decided for her?

Get ready for the year of – Viva Magenta. Global color authority Pantone reveals its Color of the Year every December, and its 2023 choice is “a nuanced crimson tone” that balances warm and cool. A vibrant member of the red family, Viva Magenta is not only “brave and fearless”, it is “audacious, witty”, and “an unconventional shade for an unconventional time,” Pantone said, calling it a “pulsating color whose exuberance promotes optimism and joy.” The Pantone Color Institute’s choice is intended to reflect the latest trends in sectors including fashion, beauty, technology, design and home decor.

With less than 2 weeks to go until the release of “Avatar: The Way of Water,” the box office is sliding into another dry period, with Marvel’s “Black Panther: Wakanda Forever” staying #1 despite diminishing returns, with the blockbuster earning an expected $15-16 million in its 4th weekend, and bringing it to the doorstep of $400 million domestic. The seasonal action comedy “Violent Night” is estimated to have met projections with an $11.8 million opening weekend. Starring David Harbour as a surly, beatdown

Kelly Clarkson says a strange man is showing up to her house, trespassing on her property and leaving her unwanted gifts, and has asked the police to get involved. Reportedly, over the past month, the same man’s been popping up at Clarkson’s LA-area home, going up to her porch and dropping things off for her. A source says he has been leaving behind cards, plants and other random items — even though she says she has never met him and has no idea who he is. Clarkson’s security was concerned enough to call police and file a report, and now LAPD Threat Management is investigating. Cops see the man’s alleged behavior as very troubling — they don’t know yet if it’s a fan who means no harm, or a situation that could escalate into something far worse.

Everyone knows that walking is good for you. You know what’s REALLY good for you? Walking backward. I’m not kidding. In fact, a study published in the International Journal of Sports Medicine said that reverse walking and/or running makes for good cardio exercise, and those who did so showed improvement in weight loss goals as well as body composition. Inspired by that 2005 study, nutritionist Juhi Kapoor took to Instagram to further share that walking backward helps make the legs stronger and uses muscles that haven’t been used before. According to her, people who have knee pain or an injury can do reverse walking for rehabilitation as its impact on the knee is very low. She also cites other benefits of reverse walking, including strengthening leg muscles, reducing back pain and helping sciatica. To get started, she says to aim for 15 minutes of backward walking per day, while wearing proper shoes, in an area where there are no rugs or furniture around. And if you are doing it outdoors, be very aware of any people, animals, and other possible obstacles nearby, to keep yourself safe. LINK: https://www.instagram.com/p/Clf58i-jAea/

Popcorn is one of the healthiest snacks. It builds bone, muscle, tissue, aids digestion, and is good for the teeth.

There are 30 times more trees on Earth than there are stars in the Milky Way. It’s estimated that there are 100 billion stars and 3 trillion trees.

Forrest Mars, the creator of Peanut M&M’s, was allergic to peanuts.

Lions are the only cats that live in packs.

If you refrigerate rubber bands, they will last longer.

The first roller coaster was used to transport coal down a hill. After people saw how fast it moved, they asked to pay for a ride on it.

Question: 30% of people say they avoid talking about THIS at Holiday get togethers. What is it?

The classic baguette, the long, crusty bread loaf that is a delicious staple of French life, has been awarded special protected status, placing it alongside other regional food delicacies from around the world. The “artisanal know-how and culture of the baguette” is now officially recognized on UNESCO’s list of Intangible Cultural Heritage, the organization has announced. The bread sticks, with their crusty exterior and soft middle, have remained a quintessential part of French life that President Macron calls “250 grams of magic and perfection.” The baguette joins other foods and culinary cultures with UNESCO heritage status, including the making of Neapolitan pizza, kimchi, Belgian beer culture, the “Mediterranean diet”, and Arabic coffee.

IF THE GUY WHO NAMED ‘WALKIE-TALKIES’ NAMED EVERYTHING:

➢ ‘Forks’ would be called ‘stabby-grabbies’

➢ ‘Spoons’ would be called ‘soupy-scoopies’

➢ ‘Wigs’ would be called ‘hairy-wearies’

➢ ‘Socks’ would be called ‘feetie-heaties’

➢ ‘Limousines’ would be called ‘roomy-vroomies’

➢ ‘Computers’ would be called ‘starey-squareys’

➢ ‘Microwaves’ would be called ‘heatie-eaties’

➢ ‘Cowbells’ would be called ‘cattle-rattles’

➢ ‘Defibrillators’ would be called ‘hearty-starties’

“I didn’t give you the finger, you earned it.” – Bill Murray

The best way to teach your kids about taxes is by eating 30 percent of their ice cream. - Bill Murray