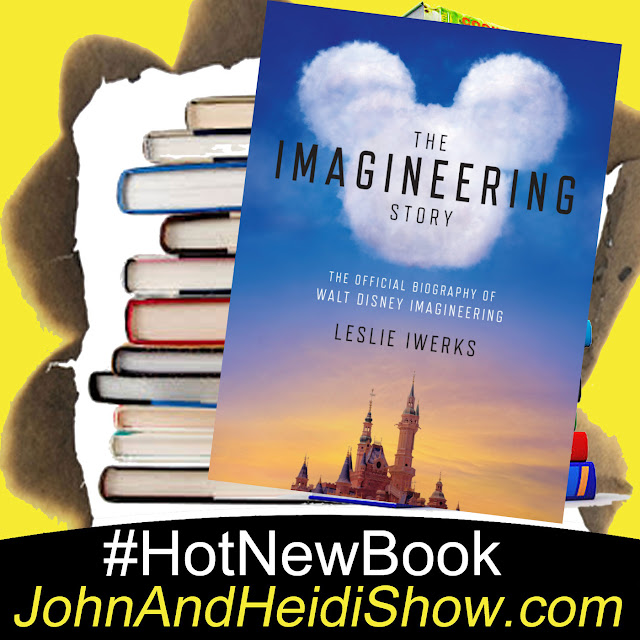 Today we visit with Leslie Iwerks. She's with Disney and her grandfather Ub Iwerks was the co-creator of Mickey Mouse. We will visit about her new book “The Imagineering Story: The Official Biography of Walt Disney Imagineering”

There are those who fear change – and then there are those who seem to thrive on it. And yes, making big life decisions, like switching jobs or moving, can be stressful. But according to a new study, it’s probably a good idea to make a change. A University of Chicago study asked 22,000 people to make a decision on a dilemma based on the outcome of a coin toss. Questions ranged in seriousness from “Should I start my own business?” and “Should I propose?” to “Should I grow facial hair? They found that for important decisions (e.g. quitting a job or ending a relationship), “overwhelmingly, the people who made a change were more content than those who didn’t.” Study participants who made a change were more likely to say they would make the same decision if they had to do it all over again. What’s more, those who decided to NOT to make changes were happy about their decision at first, but by the 6-month mark, they were not.

Young people in France will have free access to condoms beginning in January. Speaking at an event for young people’s health, President Emmanuel Macron said those aged 18-25 will be able to collect them from pharmacies, describing the move as a “small revolution in prevention”. In 2020 and 2021 France experienced a 30% national increase in STI rates.

Next month’s AFI Awards will honor films, including the “Avatar” sequel, “Top Gun: Maverick”, “Elvis” and popular television series like “Abbott Elementary”, “Better Call Saul” and “The White Lotus”. The American Film Institute announced its slate of honorees Friday ahead of its gala luncheon on Jan. 13 in Beverly Hills. The institute selects 10 movies and shows for its ceremony, which honors projects deemed among the best of the year culturally and artistically. Additional film honorees are: “Everything Everywhere All at Once”, “The Fabelmans”, “Nope”, “She Said”, “Tár”, “The Woman King” and “Women Talking”. The other television series being honored are: “The Bear”, “Hacks”, “Mo”, “Pachinko”, “Reservation Dogs”, “Severance” and “Somebody Somewhere”.

A new Christmas movie, IT’S CHRISTMAS AGAIN, is now available on DVD and streaming. Starring Lawson Touliatos (ON THE COME UP, SUPER SCIENCE SHOWCASE), Leela Owen (“Doom Patrol,” JUST BEYOND), Dimitri Mareno (ATL HOMICIDE, HAYSEED) and Reina Ozbay (“The Chosen,” “The Marvelous Mrs. Maisel”), IT’S CHRISTMAS AGAIN will bring the joy and true meaning of Christmas to homes across the country. An unexpected turn of events lands our main character in a field outside Bethlehem on the night Jesus was born. While on his journey with the shepherds to find the promised Messiah, he discovers the true meaning of Christmas. With ten original songs and large dance numbers, IT’S CHRISTMAS AGAIN is a modern-day musical the whole family will love! You can visit www.ItsChristmasAgainMovie.com

The director of the upcoming film “Joker: Folie à Deux” has revealed a first look at Joaquin Phoenix’s return as ‘Arthur Fleck’ through an Instagram post. Todd Phillips captioned a simple pic of Phoenix having a shave with the words: “Day 1. Our boy. #joker.” The plot of the upcoming film is under tight wraps, but it is known that Phoenix will reprise his role as disturbed villain Arthur Fleck. The 48-year-old will be joined by Lady Gaga, who reportedly plays the villain ‘Harley Quinn,’ and word is that Brendan Gleeson has been cast but in an unknown role. Phillips and his original “Joker” film scored a whopping 11 Academy Award nominations, and Phoenix earned the Best Actor Oscar. The new film is slated to hit theaters October 9, 2024, exactly 5 years after the original “Joker.” LINK: https://tinyurl.com/5n6u5s3u

• Printed Christmas cards or the long-distance phone call? [Christmas cards were first engraved in 1875, the first long distance call–from Boston to New York — was made in 1884]

During your lifetime, you’ll eat about 60,000 pounds of food. That’s the weight of about 6 elephants.

Smelling bananas and/or green apples can help you lose weight.

A floating log is considered the first vehicle in human history. Second oldest: a sled.

In Germany, making the “shhhh” sound means “hurry up”.

Experts say that a belly laugh can help relieve constipation.

As a child, Jim Carrey wore tap shoes to bed just in case his parents needed cheering up in the middle of the night.

Question: The average family will do THIS 8 times during the holidays. What is it?

Prince Harry says his family was more than “happy to lie to protect” Prince William, but failed to look out for him. The official trailer for the second half of Netflix’s “Harry & Meghan” shows the Duke of Sussex and his wife, Meghan Markle, reflecting on their decision to quit their duties and flee to California, describing their plane’s departure out of the UK as a “freedom flight.” Harry adds that they couple have been victims of “institutional gaslighting”, before the Duchess says: “I wasn’t being thrown to the wolves, I was being fed to the wolves.” The trailer goes on to claim that the royal family were “practically recruiting people” to disseminate false stories about the couple. The next 3 episodes of the series will be released on Thursday. LINK: https://tinyurl.com/59w9jhsd

PARENTS WHO RAISE HIGHLY SUCCESSFUL KIDS HAVE THESE THINGS IN COMMON:

We all want our children to grow into happy, healthy…and successful adults. And when it comes to that last one (success), there is so much advice out there, it can be overwhelming. But there are common threads among parents who raise resilient, confident, well-adjusted children. Here are 3 things parents of highly successful kids have in common, according to experts:

• They teach empathy: Share you own emotions so your kid feels safe sharing theirs. And ask your kids to notice the feelings of people around them. Point out someone and ask “How do you think that person is feeling?” (If you’re pointing at them, they’re probably feeling singled out!)

• They show an interest in their child’s interests: Sports, video games, debating, music, whatever it is, parents of successful kids encourage their hobbies because it keeps them mentally active. And even if it’s not a hobby, showing interest in what your child is doing can have a monumental impact.

• They are optimistic: Optimistic kids view challenges and obstacles as temporary and possible to be overcome, so they are more likely to succeed. As a parent, be mindful of your own behaviors. Do you describe situations in a negative or positive way? Would your friends say you are a glass-half-full or glass-half-empty kind of person?

Different taste in jokes is a great strain on the affections. - George Eliot