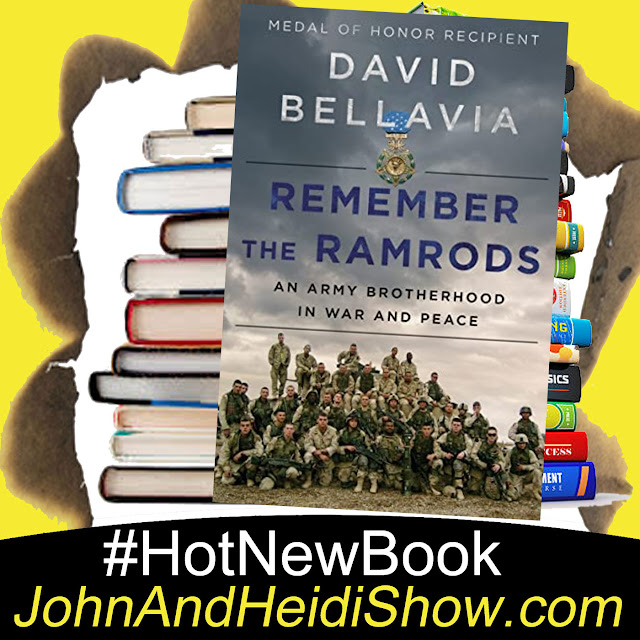 Today we visit with author David Bellavia about his new book “Remember the Ramrods: An Army Brotherhood in War and Peace” https://amzn.to/3CMaGLM

A new report from FloridaBet.com reveals the states which have the worst luck.

New York is named the luckiest state across the US

Do you believe in luck or misfortune? Friday the 13th has been long considered a harbinger of bad luck but, could this be down to where you live?

According to the updated index, Florida takes the crown as America’s unluckiest state, receiving the highest score of 64.7 out of 100. For the Sunshine State, this is a massive jump from the report released in 2022, which ranked the 17th. Florida had the 6th highest % of divorce rates leading up to 2023 at 13%. Florida also reported the most lightning fatalities, with reports of 519 since 1952.

Unfortunately for the Mountain state, who topped the board in 2022, now ranked second. Have the highest accidental mortalities (122.2 people per 100,000) further to the misfortune, West Virginia also had the second lowest life expectancy (72.8 years) and was ranked as America’s unhappiest state.

Below are the top-15 US states in order of unluckiness:

West Virginia is ranked as the USA’s unhappiest state.

Louisiana is named as America’s worst state to live in.

Florida has the highest number of lighting fatalities (519).

Texas has had the highest number of disaster declarations (365).

Mississippi has the lowest life expectancy (71.9).

The full data can be found in an excel
https://docs.google.com/spreadsheets/d/1SxDghazCQIjNdMMBUArFI-_UOLxSR1_mk_BjkAu-vi4/edit?usp=sharing

A green comet is appearing in the sky for the first time in 50,000 years. Named C/2022 E3 (ZTF), the comet, discovered last March, has an orbit around the sun that passes through the outer reaches of the solar system, which is why it’s taken such a long time to swing by Earth again. The icy celestial object can be distinguished from stars by its streaking tails of dust, and the glowing green coma surrounding it. It should be visible nightly to observers in the Northern Hemisphere for most of the rest of this month, and to those in the Southern Hemisphere in early February, according to NASA.

Todd Field’s “Tár”, a psychological drama about the downfall of a fictional composer and conductor, starring Cate Blanchett, won another major critics award on Saturday, with the National Society of Film Critics naming it the best film of 2022. That gives Tár a near-sweep of the major critics awards. It also won the top prize from the New York Film Critics Circle and tied with “Everything Everywhere All at Once” for top honors with the Los Angeles Film Critics Association.

“M3GAN” made a killing in its box office debut weekend, but not enough to scare “Avatar: The Way of Water” from the top spot. The new horror film took a $30 million stab, making it the first movie to open above $20 million in the first weekend of January — typically a slow, post-holiday time — since 2018’s “Insidious: The Last Key.” But M3GAN will have to settle for second place, as “Avatar: The Way of Water” looked set to make about $40 million in its 4th weekend, floating its domestic take above $500 million, and $1.7 billion worldwide.

Your nightmares have been answered. Netflix has confirmed that the massive hit series “Wednesday” will return for a second season. No date for a premiere has been announced, but creators/executive producers Alfred Gough and Miles Millar said: “We can’t wait to dive headfirst into another season and explore the kooky, spooky world of Nevermore. We just need to make sure Wednesday hasn’t emptied the pool first.”

We've passed the last possible day that you can wish someone a “Happy New Year” without committing a social faux pas, according to a pair of etiquette experts – and that’s only if today is your first day back to work after the holidays. Ann Elizabeth Burnett, founder of Elizabeth Etiquette, says while there’s no set expiry date for wishing someone the best in the New Year, “by the end of the first week, after New Year’s, the greeting has sort of waned.” An exception could be granted, for example, if someone you know was offered a new job later in January…you might consider saying something like “what a great start to the new year”, and wish them the best. For Suzy Fossati, founder of Avignone Etiquette, there is there is a fluid timeline for the greeting. She feels that for many, the celebrations actually on Epiphany, which was Jan. 6, but with many going back to the office today for the first time in 2023, you’re OK wishing clients and colleagues a “Happy New Year”. But after today, it’s just awkward.

People in nudist colonies play volleyball more than any other sport.

Your brain literally heats up when you’re stressed. Smiling can cool it down.

It takes 120 litres of water to make one glass of wine.

Question: In a survey THIS was named the most annoying thing people have to deal with while driving. What is it?

Hot dog! Oscar Mayer is looking for a crew of drivers for its iconic “Wienermobile”. The job description says those selected will visit over 20 states in the legendary hot-dog-shaped vehicle, travel more than 200,000 miles, serve as an Oscar Mayer spokesperson at over 200 events, and document their journeys on social media. Ideal candidates for the year-long position are “outgoing, creative, friendly, enthusiastic, graduating college seniors who have an appetite for adventure and are willing to see the country through the windshield of the Oscar Mayer Wienermobile,” says the company. There are 12 Wienermobile driver positions available, and the competition is fierce: In past years, less than 1% of applicants were selected. No word on how much the position of “Hotdogger” pays. LINK: https://tinyurl.com/3yfak72d

✪ The Marvels (July 28): The sequel to 2019’s Captain Marvel, Brie Larson is joined by Iman Vellani and Teyonah Parris as heroes. And Samuel L. Jackson is back as Nick Fury.

✪ Haunted Mansion (Aug. 11): A comedic take on Disney’s “Haunted Mansion.” It stars Rosario Dawson as a single mom who moves into a ghostly manor with her son. Plus Owen Wilson as a priest, and Tiffany Haddish, Danny DeVito Jamie Lee Curtis, Dan Levy, and more.

✪ Challengers (Aug. 11): Zendaya stars in this romantic drama as a tennis player-turned coach who commits to help her husband become champion in spite of an initial losing streak.

✪ The Exorcist (Oct. 13): Ellen Burstyn reprises her role from the 1973 original. Ann Dowd and Leslie Odom Jr join in, as does the fictional demon Pazuzu from previous “Exorcist” movies. (***More tomorrow***)

If you try to fail, and succeed, which have you done? - George Carlin