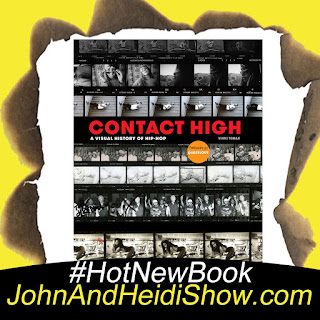 Today we talk to Vikki Tobak about her new book Contact High: A Visual History of Hip-Hop
AVAILABLE NOW - https://amzn.to/2J4rSPI

"You can't use up creativity. The more you use, the more you have." --Maya Angelou


According to police, after her boyfriend repeatedly declined to have sex with her, a Florida woman grabbed a kitchen knife and slashed him multiple times in the face. In response to a 9-1-1 call about a disturbance at a Vero Beach apartment, cops arrived at the residence around 3:30 a.m. Thursday and encountered Katherine Nieves-Tavarez at the front door. The 27-year-old woman had blood on her clothing and hands. The victim told officers that Nieves-Tavarez, his live-in girlfriend, had been drinking and “asked to have sex, which he declined.” The man added that “after declining multiple times,” Nieves-Tavarez “became angry and started yelling at him.” Nieves-Tavarez then allegedly retrieved a “large, silver kitchen knife” and followed the man outside to the patio. There, Nieves-Tavarez allegedly slashed the victim with the knife. She is now facing a felony battery charge. (https://goo.gl/77sLsK)

Pamela Anderson’s son has joined a reboot of “The Hills.”
(https://goo.gl/PLwh8c)

Demi Moore made her Instagram debut at the wedding of Princess Eugenie in London on Friday. (https://goo.gl/7WtT7f)

A Rasmussen poll has President Trump’s approval rating at 51%. (https://goo.gl/CtT2FX)

A naked naval officer was arrested after he assaulted a man at Busch Gardens in Williamsburg. (https://goo.gl/1GZTCi)
Massachusetts Senator Elizabeth Warren released the results of a DNA test that claims there is strong evidence to suggest she had a Native American ancestor six to ten generations ago. (https://goo.gl/HDjUaZ)

Meghan Markle and Prince Harry are expecting their first child. If it’s a girl, they’re going to honor her mother and name her Doria. (https://goo.gl/dLNcBq)

The Chinese Government threw a blogger in jail for five days after he disrespected the National Anthem.
(https://goo.gl/KStkty)
In New Jersey, power to over 2,000 homes was knocked out by a squirrel.

An Amy Winehouse hologram tour has been booked for late 2019. (https://goo.gl/UsoaE3)

Flapdoodle
(FLAP-doo-dul)
Noun:
-Words or ideas that are foolish or untrue.
-Polite way of saying "a load of B.S."

Used in a sentence:
"That fatuous flamfoo is a fountain of flippant falsehoods and far-fetched flapdoodle."

WEIRD NEWS:Brought to you by FreshPatch.com (use promo code RADIO to save 10%)
A West Virginia woman is accused of trying to steal a car, threatening to drink deputies' blood, and hiding a knife in her buttocks. Citing a criminal complaint, news outlets reported that 37-year-old Jackie Fullmer tried to take a man's car keys, armed with a hatchet and knife. Witnesses told deputies that Fullmer confronted a victim near a Sunoco gas station in Fairmont, saying she didn't want to hurt them and motioning like she had a weapon. However, Fullmer fled when she noticed bystanders watching. Officials say security footage showed a confrontation between Fullmer and the victim. A chase ensued when deputies found her on a nearby staircase. A deputy shot Fullmer with a stun gun when she ran at his cruiser with the hatchet in hand. She threatened to stab deputies in the neck and watch their “blood drain as she drank it” while being transported. Deputies say she continued to threaten them on the way to the station. The hidden knife was found during booking. She acknowledged using it to cut a seat belt in the cruiser. (https://goo.gl/c6sMYn)

MOMENT OF DUH:
A schoolboy had his drink spiked with Viagra by a classmate while they were on a school trip to Berlin, his father has said. The 15-year-old, who attends Etonbury Academy in Arlesey, Bedfordshire, had been on a six-day trip to the German capital when the incident happened. Eighty pupils were on the trip where they were learning about the Cold War and the Holocaust. It was said to be the youngster’s first ever trip and he was left humiliated after news of what happened spread to another school. The boy’s father told the Comet: “He did it to be nasty and advertised it on Snapchat as well.” The 16-year-old who spiked the drink has since been suspended for two days. The boy’s father said he should have received a harsher punishment. He stated, “Two days’ suspension for putting a child’s life in danger is appalling.” Interim principal at Etonbury Academy, Alan Lee, told the paper: “Etonbury is aware of an incident arising from the recent school visit to Berlin and has undertaken an investigation into the incident.” (https://goo.gl/4Rt7YV)