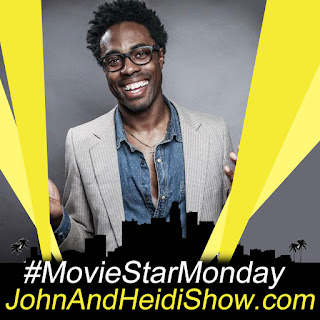 It's another #MovieStarMonday as we talk with funny man Willie Macc. He is a reality TV star (College Hill-BET) that transitioned into TV Shows (CSI) and movies (Meet The Spartans). Willie is now doing a ton of stand-up comedy and TV commercials. https://www.imdb.com/name/nm2420047/#JohnAndHeidiShow #MovieStarMonday #WillieMacc #CollegeHill #BET #PumpWaterGuru #MeetTheSpartans #ComedyCall #StandUpComedy

A Medscape survey found that one in seven doctors have contemplated suicide. (https://nyp.st/2CqMHSl)

Royal Caribbean said a 27-year-old cruise passenger has been banned after he filmed himself jumping from the boat for an Instagram video. Nick Naydev posted a video to Instagram showing how he jumped from the 11th deck of Royal Caribbean's Symphony of the Seas, the world's largest cruise ship, while it was docked last week in the Bahamas. Naydev explained, “I was still drunk from the previous night. When I woke up, I just decided to jump.” Naydev was picked up by a nearby small boat and brought back to the cruise liner, where crew members told him he and his companions were being kicked out. Naydev said he spoke to local police, but they told him charges were not being sought. Royal Caribbean said in a statement to USA Today, “This was stupid and reckless behavior, and he and his companions have been banned from ever sailing with us again. We are exploring legal action.” (https://bit.ly/2T1aQGg)

BIG SCREEN-LITTLE SCREEN: Brought to you by ChannelSurferTV.com
Fox News host Brett Baier was briefly hospitalized after getting into a car crash during his family vacation in Montana. (https://bit.ly/2FSafD8)

A new report says Jay-Z and Beyonce avoid the paparazzi by sending their friends out as body doubles before they leave through a different door.
(https://pge.sx/2sDw7u9)

A Dutch magazine has cut ties with a reporter who fabricated twenty-seven stories. (https://bit.ly/2RLGET8)

KFC is selling a gravy scented candle that will fill your home with the aroma of KFC gravy. (https://nyp.st/2R6X9nv)

A new report claims that eels in London’s Thames River have become hyperactive because of the large amounts of cocaine in the water. The eels have so much energy that scientists claim their mating habits have doubled.
(https://bit.ly/2RDMYvD)An arrest warrant has been issued for a northern Illinois man who police say allowed an 11-year-old relative to drive herself to school in a stolen rental car while he rode along. The Lake County News-Sun reports employees at a Round Lake Park elementary school saw the girl pull up to the school’s drop-off point on Jan. 9th. She and a 9-year-old girl who was in the back seat exited the car. Police say 31-year-old Khafilu Oshodi of Round Lake then moved into the driver’s seat and drove away. Oshodi is wanted on two counts of child endangerment and driving with a suspended license. Police Chief George Filenko says the drop-off area is very busy and the incident could’ve “resulted in any number of tragic scenarios” if the child lost control. (https://bit.ly/2AWFVUJ)

FUN FACT FOR YOU:
Share this with your friends... they'll think you're really smart!
After losing a drunken poker bet in 2009, a New Zealand man had his name legally changed to “Full Metal Havok More Sexy N Intelligent Than Spock And All The Superheroes Combined With Frostnova.” It took five years, but the name was finally approved by the government. All 99 characters of his new name are on his passport.

WEIRD NEWS: Brought to you by WeirdGiftOfTheDay.com
According to police, a high-speed chase on an Indiana highway on Wednesday featured a trail of stolen women’s underwear. 34-year-old Holly Sansone was originally stopped on suspicion of shoplifting from a Kohl’s store in Portage when she shrugged and said, “I’ve gotta go,” before speeding away. While leading authorities on a chase at speeds reaching 97 mph, the woman tossed items out a window along the way. Those items included panties and bras that were taken from the store, according to a police report obtained by the newspaper. The chase eventually ended when Sansone’s tires were shredded by spikes that police laid across a roadway. The woman was arrested on charges of resisting law enforcement, theft and reckless driving. Altogether, police recovered four bras, fourteen pairs of panties, two candles and some air freshener refills — altogether valued at $445. (https://nyp.st/2svzFhV)MOMENT OF DUH: Brought to you by FunkyMonkeyShirts.com

A Southwest Florida woman found herself behind bars after police say she pulled out a gun and threatened another person because it was past her appointment time at a local hair salon. Laura Ulin was arrested Monday afternoon after the incident at the Hair Cuttery in Cape Coral, with the 40-year-old being charged with aggravated assault with a deadly weapon without the intent to kill and carrying a concealed weapon without a license. According to NBC affiliate WBBH-TV, Ulin when into the location upset and swearing because it was past her scheduled time and claimed stylists were not working. When a customer got up in an attempt to calm her down, Ulin pulled a gun out of her purse and pointed it at the customer’s stomach before leaving. Ulin was arrested at her home several hours later and was released on $35,000 bond. Her next court appearance is scheduled for February 11th. (https://bit.ly/2HgrHU3)