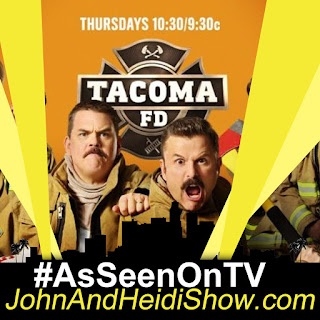 Steve Lemme & Kevin Heffernan to talk about their new truTV comedy, Tacoma FD, which is also the #1 new comedy on cable .Airs on Thursdays 10:30/9:30CT on TruTV. Tacoma FD, is a new half-hour comedy set in a firehouse of one of America’s rainiest cities - Tacoma, WA. Due to constant rain, the firefighters spend most of their time responding to absurd non-life threatening calls and playing good natured pranks on one another. In addition to the show, the comedy-duo is also on a comedy tour at the moment! - http://www.heffernanlemme.com/

A survey by BetterHelp found that one in four Americans say they have no one to confide in. (https://nyp.st/2ITREbZ)

A man in northern Mexico had to be rescued after he accidentally trapped himself in a hole that he dug so he could spy on his former girlfriend in violation of a court order to stay away from her. The Sonora state attorney general’s office said the 50-year-old man had spent days digging the hole in Puerto Penasco, a town on the Gulf of California, only to become trapped and require assistance to get out. The man had been ordered to stay away from his former girlfriend due to domestic violence charges and he is now in jail. The newspaper El Universal said the man dug a tunnel under the woman’s house. It said the woman told police that over the course of a week, she had heard scratching noises but assumed the noise was cats. But when the sound grew louder, she investigated and found her former partner of fourteen years trapped below. She said she ended the relationship because her partner was very jealous. Police said the man appeared intoxicated and severely dehydrated once they got him out of the tunnel. (https://nyp.st/2DzCdBJ)

The trailer for the fifth episode of “Game of Thrones” promises an epic battle.
(https://nyp.st/2VPpVQ3)

The new Pokemon movie hits theaters this weekend and critics are calling it surprisingly funny. (https://bit.ly/2Vo3UZ6)

“Pokemon: Detective Pikachu” beat “Avengers: Endgame” at the Box Office Friday night and adjusted figures could give it the weekend lead when they come out. (https://bit.ly/2Hoomz4)

SCOOP OF THE DAY: Brought to you by BetterCreditCards.net
Dr. Pepper is releasing its first new flavor in five years as part of a promotion for the new “Spiderman” movie. https://www.thrillist.com/drink/nation/dr-pepper-dark-berry-review


A Florida man was arrested for DUI after he crashed his tractor into a police car.
(https://bit.ly/307piAA)

Meat Loaf broke his collarbone after tangling his foot in a wire and falling offstage during a Q&A in Texas. (https://dailym.ai/2VcVrmy)

A group of “Exorcist Specialists” have gathered in Rome to exchange the best practices on getting rid of demons. (https://bit.ly/305hXSc)

Amazon is being accused of using its Echo Dot Kids device to illegally collect data from children. (https://bayareane.ws/307O5EH)

Natural Light Beer is offering a summer internship but the company says it doesn’t want someone with “traditional qualifications.” They will instead select a person who “lives the Natty Light Lifestyle.” Interns will make $40 an hour.
(https://bit.ly/2VVxCUK)

Denver has become the first city to decriminalize psychedelic mushrooms... and to think, people thought marijuana was a gateway drug. (https://dpo.st/303Pfku)

FUN FACT FOR YOU:
Share this with your friends... they'll think you're really smart!
When Eagles Flirt, They Also Flirt With Death. Courtship between eagles can be rather death-defying. As New York’s Department of Environmental Conservation puts it, “The pair soars high in the sky, begins a dive, and interlocks talons while descending in a series of somersaults.” But it usually all works out, with the two producing one or two offspring each year.


WEIRD NEWS: Brought to you by WeirdGiftOfTheDay.com
A Canadian woman was arrested after allegedly shattering a door at a coffee shop because the business did not have any doughnuts. According to a Kingston police news release, a woman entered a downtown coffee shop on April 22nd around 4:15 a.m. and began to cause a disturbance. Police said that she then became enraged that no doughnuts had been made by 4:00 a.m. The woman reportedly shouted at staff and then exited the store by allegedly kicking open the glass door, causing it to shatter. Police say she then fled the area. Although police arrived shortly after, they were unable to find the woman, however a security camera captured the alleged incident. Then, on May 2nd around 5:30 a.m., employees at the same coffee shop called police, saying the woman had returned. The 30-year-old woman was arrested and charged with mischief under $5,000 and breach of probation. (https://bit.ly/3052mCa)

Police said that cops in Florida found a woman with a baby alligator hidden in her yoga pants and dozens of tiny turtles in her purse when she was pulled over with a man in a pick-up truck Monday. Charlotte County Sheriff’s Office deputies stopped the vehicle at around 3:00 a.m. after it blew through a stop sign. The man and woman inside said they’d been trying to collect frogs and snakes from a nearby underpass. The deputy asked to see what they’d collected, to make sure they didn’t have any species they weren’t supposed to have — and the 25-year-old woman opened her purse to reveal forty-one small turtles. She then pulled a foot-long alligator out of her yoga pants. The turtles and American alligator are regulated so the driver and his gal pal were cited for having them. The reptiles were seized by the Florida Fish and Wildlife Conservation Commission and then released, the outlet reported. (https://nyp.st/2H7epY5)

What do these 3 things have in common:
THE NAVY—A ZOO—A ZIPLOC BAG
(They all have Seals)