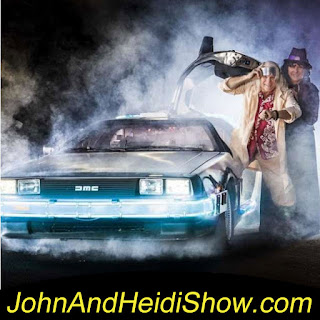 Today we talk with Doc Nigh, the keeper of a Deloren Time Maching (Back To The Future) which was featured in a reality show... The Fireball Run... they actually helped find a BUNCH of missing children! http://deloreantimemachine.online/

A Pew Research Survey found that 69% of Americans think the government intentionally withholds information from the public. (https://yhoo.it/2Y2lEuk)

After grabbing the buttocks of a fellow female passenger on a sightseeing cruise, a Florida Woman told the victim’s husband, “You should go back to the country you came from” when he confronted her about the groping. During a trip Friday afternoon on the Anclote River, which flows into the Gulf of Mexico, Lisa Anne Matteson allegedly got handsy with a fellow traveler. 58-year-old Matteson appeared intoxicated, according to several witnesses on the Spongeorama cruise boat. Police allege that Matteson twice grabbed the victim’s buttocks. When the victim’s husband asked Matteson to stop, she replied, “You should go back to the country you came from.” The affidavit does not identify the man’s race or nationality. After Tarpon Springs police arrested her for misdemeanor battery, Matteson denied grabbing the victim’s buttocks, saying she “didn’t remember anything and doesn’t know why she was arrested.” (https://bit.ly/2Yb0tBK)

Jamie Lee Curtis has signed on to star in two more sequels to “Halloween.” The new movies take place in modern times. (https://yhoo.it/2y5YsvK)

Marvel announced at San Diego Comic Con that Natalie Portman has signed on to play THOR in the next reboot of the franchise. (https://nyp.st/30Pvgpa)

SCOOP OF THE DAY: Brought to you by BetterCreditCards.net
Krispy Kreme is now selling donut filled milkshakes for $4.99. They’re also selling ice cream sandwiches made with donuts. (https://fxn.ws/2LHG6tY)
A Navy Seal Platoon has been kicked out of Iraq for drinking alcohol while they were deployed. (https://bit.ly/2LG3iJa)

Kellogg’s is selling a new box of Cheez Its that’s combined with a box of wine. The wine and cheese wonderland is on sale now for $25. (https://bit.ly/2JPrtCC)

An Oregon woman was arrested after she pulled up to a Taco Bell drive-thru with a cop behind her and poured a shot of tequila down the cashier’s throat.
(https://nyp.st/2Z7EjRY)

FUN FACT FOR YOU:
Share this with your friends... they'll think you're really smart!
The largest book ever weighs more than 3,000 pounds. Avid readers won’t be intimidated by a hefty novel, but they’ll still surely be impressed by what’s been deemed the largest book ever. Weighing more than 3,000 pounds and measuring 16.40 feet by 26.44 feet with 429 pages inside, the book, which is titled This the Prophet Mohamed, was created in 2012 by 50 people working together in the United Arab Emirates.


NEWS.... FROM SOMEWHERE IN THIS WORLD!
This feature will REPLACE the Fun With Phobias next month!


WEIRD NEWS: Brought to you by WeirdGiftOfTheDay.com
A 26-year-old man was sentenced to probation on Tuesday after pleading guilty to posing as a 17-year-old student so he could play basketball at a Dallas high school and groping a 14-year-old girl. Under a deal with Dallas County prosecutors, Sidney Gilstrap-Portley received six years’ probation for indecency with a child and record tampering. Authorities say Gilstrap-Portley claimed to be a Hurricane Harvey evacuee and exploited a Dallas school district policy for disaster victims. Dallas school district officials say Gilstrap-Portley posed as 17-year-old Rashun Richardson. He also dated the 14-year-old girl while pretending to be a student. Gilstrap-Portley’s cover was blown in May 2018 after one of his former North Mesquite coaches recognized him when he played in a tournament the month before. (https://nyp.st/30TeMfS)

A crazed airplane passenger threw a laptop at her boyfriend’s head on a packed jet — enraged at him looking at other women. A viral video watched more than four million times by Tuesday caught the expletive-filled fight between the couple as other American Airlines passengers pulled awkward faces trying to avoid the craziness. The unidentified woman screamed as their plane sat at the gate at Miami International Airport on Sunday afternoon. She yelled, ““You want to try to f—ing look at other women? F—k You!” Even an air stewardess telling her to stop screaming because children were on the flight fails to stop her wild rant, with the woman replying, “Yeah, I know, I f—ing consoled the f—ing child.” She was also witnessed flinging her laptop at him as he moved away down the aisle, hitting him once more as other passengers screamed and gasped. A rep for American confirmed the “dispute” on the flight from Miami to LA, saying, “Law enforcement was requested, and both passengers were removed from the aircraft.” (https://nyp.st/2LLsKgv)
THESE THREE THINGS!
What do these 3 things have in common:
BOZO THE CLOWN--PINOCCHIO--MICHAEL JACKSON
(They have FAKE NOSES)