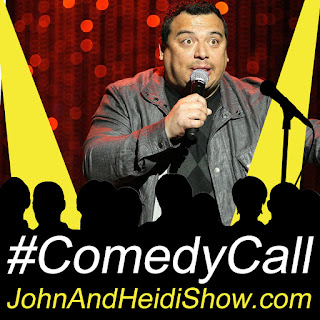 Today we have a #ComedyCall with Carlos Mencia. He's doing his best to be productive while sheltering at home and staying off the road. The end result is that he is home in LA. We could also use some comedic levity in these difficult times, and sometimes it’s just nice to hear how other people are dealing with it. - https://www.instagram.com/carlosmencia/

A CoBank survey found that a meat shortage is pushing prices to unprecedented heights. (https://bit.ly/2ytDATj)

THIS IS YOUR BRAIN ON DRUGS: Brought to you by TimeForRehab.com!
Each day we share stories about people doing dumb things under the influence, but ADDICTION IS NO LAUGHING MATTER! If you or someone you know needs help, we're here! Learn more at TimeForRehab.com.
You might say it's a bad day when you run over yourself at an intersection - and then get arrested for it. That's what reportedly happened to 39-year-old Anthony Williamson of Rapid City, South Dakota. Witnesses say Williamson was at the intersection of Jackson Boulevard and Mountain View Road about 11:25 a.m. Friday when his car door opened and he fell out. They say the vehicle's rear wheel then ran over his legs. A passerby was able to stop the vehicle. After being evaluated by medics and declining treatment, Williams was arrested and charged with driving under the influence. (https://bit.ly/35xkMOO)

Dog The Bounty Hunter has gotten engaged to his new girlfriend, Francie Frane, just ten months after his wife passed away, and less than six months after his engagement to “Moon Angell.” (http://dailym.ai/2L0Xqb2)


Disney’s Stock was downgraded after earnings were flattened by the Coronavirus shutdowns. (https://bit.ly/3djwpeV)

Amazon CEO Jeff Bezos has seen his personal fortune soar by $145 million dollars during the Coronavirus pandemic and is on course to become the world’s first trillionaire by the year 2026. (https://bit.ly/35GWGBu)

Utah police pulled over a 5-year-old boy who told them he was driving his parents car to California to buy a Lamborghini. (https://bit.ly/3fr7fwL)

Dozens of Wendy’s restaurants have been forced to take hamburgers off their menu due to the meat shortage that’s hit parts of the country. (https://yhoo.it/2L2uLCz)

A Spirit Airlines flight from Los Angeles to Detroit was forced to make an emergency landing in Des Moines, Iowa after a brawl broke out during the flight.(https://bit.ly/2L1EUiB)


Heineken is suing a shipping company that destroyed 15,000 cases of beer after they froze them at extreme temperatures during transit. Heineken is seeking $234,000 in damages. (https://bit.ly/3fdTC49)


Uber is introducing new technology that will require drivers to wear masks while they operate the vehicle. (https://cnn.it/2Wshd8p)


Footage has gone viral of a monkey riding a mini-motorcycle and trying to kidnap a small child in Indonesia. (https://bit.ly/2Lc0ph3)

Nearly all species to have ever existed on Earth are extinct. We walk an Earth that has seen the extinction of 99.9 percent of all of the species who've ever lived on it, according to PBS. Congratulations—that means you are technically in the .1 percent… at least for now!

Dateline.... MEXICO
The sons of jailed drug kingpin “El Chapo” have been patrolling the streets of Culiacan, Mexico and threatening to torture anyone who violates the Coronavirus lockdown. (https://bit.ly/2yBiMch)

A 44-year-old Arnold, Missouri man was arrested after he reportedly punctured a tire on a car parked at an apartment in Arnold. The man allegedly told police he damaged the tire because the car was making sexual advances toward him. Police were called to the apartment complex at about 8:00 p.m. on March 30th because the man was holding a hammer and yelling at the unoccupied car, a 2015 Chrysler 200. The car’s driver-side back tire was punctured with a screwdriver. The man also reportedly told police the owner of the car was assaulting him telepathically and trying to control his mind. The car had Illinois dealer plates on it, and the owner had not been located as of April 15th. The suspect was transported by Rock Township Ambulance to Mercy Hospital South for evaluation. He allegedly threatened paramedics in the ambulance and a doctor at the hospital. Arnold Police will seek a charge against the man through the Arnold Municipal Court for second-degree property damage. (https://bit.ly/2YtZWhN)

A man in California was arrested three times over the course of twelve hours last Wednesday — including for allegedly leading officers on a pursuit — and was only given citations and released each time due to the statewide zero-bail policy amid the Coronavirus outbreak. The Glendora Police Department said Friday on Facebook that 24-year-old Dijon Landrum from Monterey Park racked up three citations between 8:28 a.m. and 8:50 p.m. on Wednesday after three incidents in the city located about 23 miles east of Los Angeles. The zero-cash bail emergency mandate in California, which has led to reduced prison populations to reduce the spread of COVID-19, is continuing to be a challenge for law enforcement as alleged criminals are released back into the public. Last weekend, a man in Chino Hills was arrested four times over the course of two days for allegedly trespassing on the same property, only to be released due to the zero cash bail policy. (https://bit.ly/3daGRp2)

FAKE NEWS.... OR FLORIDA?!
I read a headline, you guess if the story is something that really happened in the great state of FLORIDA or is it #FakeNews made up to trick you and amuse me
Two contestants were arrested at a bikini contest in Stuart, Florida after getting into a high heeled shoe fight ….. FLORIDA (https://bit.ly/2LrsXFF)
GOOD NEWS: Brought to you by #GiftCardChallenge GiftCardChallenge.org