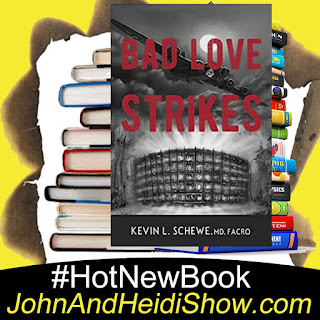 Dr. Kevin Schewe, author of Historical Sci-Fi Thriller Bad Love Strikes, available as a guest for your program. The book takes the reader on a ride through time with the Bad Love Gang, a group of friends who find a World War II time machine experiment and use it to travel back to the era and rescue people from Hitler's holocaust. https://amzn.to/2Y6yNkn


A “23 and Me” survey found that people with Type O Blood are the least susceptible to the Coronavirus. (https://bit.ly/3cUtMQa)

California Highway Police officers were involved in a “very low-speed” chase with a John Deere tractor over Highway 17. 37-year-old driver Salvador Rodriguez refused to pull over in the stolen vehicle when contacted driving without his lights on around 12:48 a.m., according to CHP officer Julieta Trenado. Reaching speeds of about 15 mph, the CHP officer chased Rodriguez for about ten minutes before he pulled over off the Glen Canyon Road exit. Scotts Valley Police Department personnel were briefly on scene to assist. Rodriguez was arrested on suspicion of tractor theft and driving under the influence. (https://bayareane.ws/3dKjIu9)


James Bond fans remain divided over the news that he’ll have a five-year-old daughter in the newest film. (http://dailym.ai/3cPH2FU)

Ice-T told Page Six that “Law & Order” has stayed on the air for as long as it has because the show has always been as fair as it can possibly be. (https://pge.sx/3hpDZYu)

This year’s Lollapalooza Music Festival in Chicago has been canceled over fears of the Coronavirus. (https://bit.ly/3f9UzcF)

An alternate interpretation of the Mayan Calendar shows that the world could end this month.(https://bit.ly/2MZIfzH)

Space X launched fifty-eight internet satellites into orbit Saturday during a historic mission aimed at bringing internet access to every corner of the world. They’ve spent $10 billion on bringing everyone internet. (https://bit.ly/37wjMeJ)

A 70-year-old man received a $1 million dollar hospital bill after being treated for Coronavirus. The good news is he won’t have to pay the bill because it’s covered by Medicare. (https://yhoo.it/3fmBMLj)

Starbucks is closing 400 stores in the U.S. and Canada in the next eighteen months. (https://cnn.it/2AXtJG0)

The NYPD is trying to identify two suspects who looted $550,000 from a high end camera store in Soho. (https://bit.ly/2AreMfu)

A woman who competed in the “Miss Hitler Pageant” was arrested in the UK for being tied to a terror group. (https://bit.ly/3hfNpWf)

Police allege that after being told she could not enter a department store without wearing a face mask, a Minnesota woman slapped a worker in the face before ripping his mask off and tossing it in the garbage. According to a criminal complaint, last month a 35-year-old named Heidi Ruth Mueller sought to enter a Menards home improvement store near her home in North Mankato, a city eighty miles from Minneapolis. When Mueller attempted to walk into the business, an employee instructed her she “needs a mask to shop at the store per store policy.” Mueller then “quarreled briefly” with the worker before grabbing the man’s face and pulling his mask down. After a second worker intervened and told her to leave, Mueller slapped the first employee “in the face and ripped his mask off before throwing the mask in the garbage,” cops say. She then “fled to the parking lot and left.” She has been charged with three misdemeanors: disorderly conduct and two counts of assault. (https://bit.ly/3cUPdRg)

Prosecutors say a Milwaukee man has admitted to causing more than $40,000 in damage to Miller Park amid protests and rioting on June 2nd. According to a criminal complaint filed with the Milwaukee County Circuit Court, 40-year-old Keyon Lambert broke into the Brewers' baseball stadium and got into a tractor, which he used to tear up the turf and dig holes in an attempt to “write his name in cursive with the tractor tires.” The incident began when a security guard found Lambert yelling inside the stadium, running down the levels of seats and at one point patting his body and saying that “I got a piece for you.” The security guard told prosecutors that indicated to him that Lambert might be armed with a gun. A field manager recounted that while Lambert was driving the tractor, he was yelling “We’re gonna burn this f----- down tonight.” Lambert eventually got out of the tractor, walked off the field, and left the stadium. Police officers then detained him. (https://bit.ly/2XTX8dq)