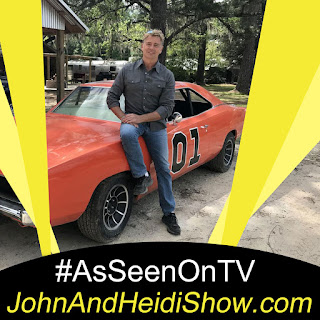 John Schneider just turned 60. The birthday party was planned for April, but COVID shut them down. Now... like a real DUKE BOY... they're gonna put on the best shindig you've ever heard of this weekend at Bo's Extravaganza! BosExtravaganza.com

According to a new survey, 76% of adults admit they have gained up to sixteen pounds since the lockdowns began. (https://bit.ly/3gyh3F0)

An Ohio man was arrested after Akron police said he caused damage inside a Subway restaurant, made his own sandwich, and pocketed a block of cheese – all while intoxicated. According to WJW-TV, 44-year-old Don Peters is facing charges of disorderly conduct, violating the open-container law, and criminal damaging in connection with the incident, which took place shortly before 1:00 p.m. Saturday at the restaurant. Subway employees alleged that Peters, who appeared to be drunk, walked into the restaurant and ordered employees to make him something to eat. Peters then took matters into his own hands, damaging plexiglass before going behind the restaurant counter and making a sandwich. Officers responded to the scene and arrested Peters, who was carrying Subway cheese and a vodka bottle in his pockets. (https://bit.ly/3e4dgO8)

For the first time since it’s 1980 release, Star Wars: The Empire Strikes Back is at the top of the box office due to its re-release at drive-in theaters that have sprung up all over the country. The film was expected to bring in a total of $400,000 to $500,000 by the end of the weekend. “Star Wars: The Empire Strikes Back” was the number one film at the Box Office for the first time since 1980 after being released at Drive-In Theaters. (https://bit.ly/38PFtqU)

Johnny Depp told a London Court that Amber Heard pooping in his bed was the last straw in their relationship. (https://bit.ly/3foqvdU)

The Rolling Stones are releasing a new version of their 1973 album “Goats Head Soup” with three unheard tracks. (https://abcn.ws/2Oco3ex)

For the third consecutive year, Arlington, Virginia, is the fittest city in the United States, according to annual rankings compiled by the American College of Sports Medicine and the Anthem Foundation.

A five-acre section of a lake (Manzanita Lake) at Lassen Volcanic National Park in California has been closed by officials after a man was bitten by an angry female river otter. According to Lassen Park’s superintendent, the swimmer was attacked by the mother otter when he got too close to her kittens.

We’ve all dropped that freshly buttered piece of golden brown toast on the floor, yes? And many of us have contemplated whether or not to just pick it up and eat it. That’s why there’s the Five Second Rule, the completely unscientific belief that food left on the floor for less than five seconds is sufficiently ick-free. But scientists (at Clemson) “found that bacteria was transferred from tabletops and floors to the food within five seconds — that is the five second rule is not an accurate guide when it comes to eating food that has fallen on the floor.”

Elon Musk has become the seventh richest person on earth after his net worth grew by $7 billion in one day last week. (https://bit.ly/2ZpioIF)

Johnny Depp testified that Amber Heard threw a haymaker at him after he admitted to losing $750 million dollars. Depp says he had just come home from a meeting with a business manager who told him he’d stolen $650 million and had not paid any of Depp’s taxes, so he owed an additional $100 million.

A bus driver in China was fined for posting insulting signs on the backs of seats. His signs read: “Please do not spit and litter … violators are as bad as pigs and dogs.”

A domestic dispute over toilet paper turned violent and resulted in the bust of a Florida woman for allegedly battering her boyfriend. According to an arrest report, 25-year-old Celesierra Thomas “left scratch marks” on the victim’s shoulder “when they were arguing over toilet paper in their residence” late Monday evening. The report does not offer further details of the toilet paper discord. Thomas and the victim share a St. Petersburg home and are parents of a baby boy. Noting that the victim had “visible scratches” on his shoulder, cops arrested Thomas for misdemeanor domestic battery. Thomas, who works as a barista, has been ordered by a judge to have no contact with her boyfriend. Thomas was arrested in September for allegedly scratching the same victim “to prevent him from calling the police” during an argument. (https://bit.ly/2ZfJpye)

A Florida family has been hit with federal charges for allegedly peddling a so-called Coronavirus miracle cure that is actually a concoction used as an industrial bleach. 62-year-old Mark Grenon and three of his sons are accused of marketing and selling the product named “Miracle Mineral Solution” through an entity called the Genesis II Church of Health and Healing in Bradenton. The toxic solution pushed by the Grenon family, also known as MMS, is typically used to treat textiles, industrial water, and pulp and paper. The FDA has not approved the solution for any health-related use and has said ingesting it can cause vomiting and dehydration. The Grenon’s also marketed the bleaching agent as a cure for other serious health conditions, including cancer, autism, and AIDS. The father and sons are charged with conspiracy to defraud the United States, conspiracy to violate the Federal Food, Drug and Cosmetic Act and criminal contempt. (https://bit.ly/38J7uAg)

An Orlando Sheriff’s Deputy was arrested for DUI after crashing his cruiser DURING the 4th of July Parade ….. FAKE NEWS