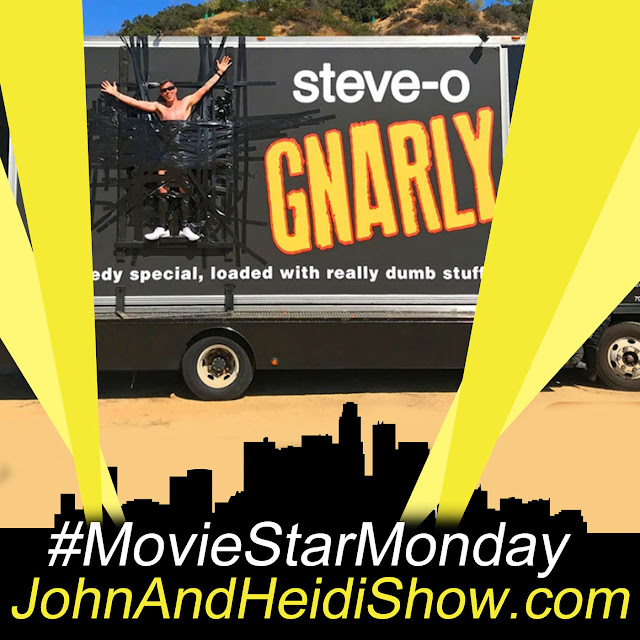 It's another #MovieStarMonday this time we chat with Steve-O (Jackass) to visit about his new, wildly explicit and original comedy special called GNARLY, available now on his website SteveO.com. The special features his stand-up comedy act cut with footage of his crazy antics described in the show, along with special appearances from the Jackass crew. #ComedyCall

A new study found that eating chocolate more than once a week will prevent heart disease. (https://yhoo.it/2ZRSIof)

A Georgia mom visiting Disney’s Epcot Center with her family — including her 7-month-old daughter — allegedly filled her diaper bag with more than baby products – two loaded pistols and marijuana. 27-year-old Yunique Smith of Stone Mountain was accused of carrying the firearms and weed when she showed up at the back entrance of the Florida theme park on July 18th. An Orange County deputy who responded to a report of a guest with a firearm and marijuana at 6:40 p.m. escorted Smith to a back office, along with her baby, 7-year-old son and the baby’s father. Disney prohibits all guests, including those with concealed weapon permits, from bringing firearms into its theme parks. Smith, who had less than twenty grams of marijuana, was charged with carrying a concealed weapon and possession of cannabis. (https://bit.ly/3hJXNoP)

“Saturday Night Live” is planning a live in-studio return for season 46, but they won’t have an audience. (https://bit.ly/2OK1Pkv)

Casting calls are underway for the “Game Of Thrones” prequel, “House Of The Dragon.” (https://bit.ly/3hoM9zy)

Fox News Host Tucker Carlson says The New York Times was planning to publish his address in an upcoming story as a way of intimidating him to stop disagreeing with their reporting. (https://bit.ly/3jqaFC0)

Health Officials are warning that kids have increased their screen time by 500% during Coronavirus lockdowns. (https://bit.ly/3eTibBM)

KFC is working with a Russian 3-D BIOPRINTING COMPANY to create lab-produced chicken nuggets. According to a press release, KFC’s “meat of the future concept” will take animal flesh cells, turn them into a paste, and then print them into sheets. (https://bit.ly/30vJGfy)

A former Jeffrey Epstein Employee says she once saw a video of Prince Andrew with a topless woman and that Epstein and Ghislain Maxwell referred to him as “Randy Andy.” (https://bit.ly/2CBKWpy)

A video of a bear approaching a group of girls in Mexico and sniffing their hair has gone viral. Crazy video.The craziest part is that one girl takes a selfie with the bear as he’s over her shoulder. (http://dailym.ai/2D2MFEa)

A Federal Prosecutor could soon release Ghislain Maxwell’s testimony about her sex life that was given in 2016. (https://bit.ly/3eWAIgy)

Police in Sussex, England responded to a video of a “large, apex predator” on the loose only to find out it was a stuffed jaguar. (https://bit.ly/3g7pzuU)

The world’s tallest swing has opened on the edge of a 2,300 foot cliff in China. (http://dailym.ai/39pbKFF)

Archaeologists in Mexico discovered tools inside a cave that show humans were living on this continent 30,000 years ago, which is 15,000 years earlier than previously thought.(https://yhoo.it/30FjhMH)

A naked man walking around at an Englewood hotel identified himself as “Batman” when deputies asked him for his name. The Charlotte County Sheriff’s Office said they went to the Suncoast Inn late Friday after the manager reported a naked man had tried to get into his room. Deputies found 49-year-old Christopher L. Jackson sitting at a table outside the hotel. He was uncooperative and said only “I’m Batman” when they asked for his name. He told them he had a room at the hotel and locked himself out by accident, but the hotel manager said Jackson was not a guest there. Jackson was arrested at the hotel for exposure and loitering and prowling. He also had a warrant out of Sarasota County for a larceny charge. He remains at the Charlotte County Jail. (https://bit.ly/339wVdw)

A Miami man defrauded the government out of nearly $4 million dollars in emergency Paycheck Protection Program funds and used part of the windfall to pay for a $318,000 Lamborghini sports car. 29-year-old David Hines has been charged with bank fraud and two other felonies, according to a criminal complaint unsealed in U.S. District Court. Federal agents allege that Hines submitted seven separate loan applications to Bank of America seeking a total of $13.5 million in PPP payments that are intended to be used to retain workers, maintain payroll, and cover other business expenses in the face of the financial devastation caused by the COVID-19 pandemic. Three of Hines’s loan applications were approved, with Bank of America depositing $3.984 million into several of his corporate accounts. A review of Hines’s bank accounts showed that he used PPP funds to pay $318,497.53 for a 2020 Lamborghini Huracán Evo. His bank accounts were subsequently seized and the car is now in the government’s possession. (https://bit.ly/2X09nnG)

Police in St. John’s County arrested an Elderly Man who tried to run over his neighbor with a tractor ….. FLORIDA (https://dailym.ai/2VCuHBf)