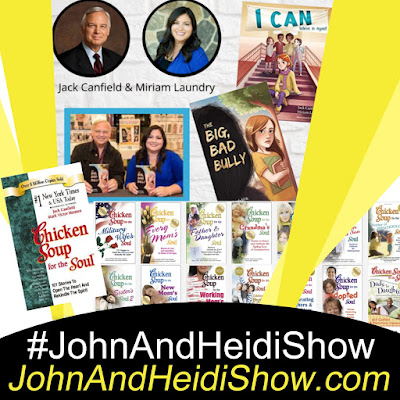 Super excited to visit with TWO amazing best selling authors. Jack Canfield (Chicken Soup For The Soul) and Miriam Laundry (I CAN... and you CAN too) they've teamed up again for another inspiring children's book. “I Can Believe In Myself”. A delightful but powerful story that offers children lifelong lessons about believing in themselves, bolstering their self-esteem, and turning the words "I Can't" into "I Can!" https://amzn.to/3fn1yC3

A study by the University of Michigan found that half a billion people on the planet now have diabetes and many of them don’t even realize it. (https://bit.ly/3yzqVrN)

A survey of 2,000 Americans reveals 68% personally know a local business owner impacted by the pandemic. Three in five respondents (63%) said they don’t mind paying more than retail value for a product if they’re getting it from a local business. (https://bit.ly/3u3YSxi)

A woman from Florida was arrested Saturday for leading troopers on a high-speed chase that spanned multiple counties. Troopers responded to an alert from the Gilchrist County Sheriff’s Office on Saturday morning, that said deputies were in pursuit of a stolen vehicle heading southbound on Interstate 75 in Sumter County. A trooper observed the 2009 Cadillac sedan traveling on Interstate 75 in Hernando County. When they tried pulling over the car, the driver fled and began driving 110 mph. Deputies pursued the driver along Interstate 75 and eventually onto a state road before they stopped the car with a PIT maneuver and the woman was detained. “Rachael Lynn Stefancich, 24, of Plant City, nearly fully unclothed, was immediately taken into custody and arrested for grand theft auto, reckless driving, fleeing & eluding, possession of methamphetamine and driving while license suspended,” the Highway Patrol said. “Stefancich was later delivered to the Hernando County Jail.” Online jail records show Stefancich has previous arrests for petit theft and drug possession, among other charges. (https://bit.ly/3udW9S6)

Rapper Lil Jon will star in a home renovation show called “Lil Jon Wants To Do What?” on HGTV. (https://pge.sx/3bDtn6N)

Chrissy Teigen continues to lose endorsement deals after it was revealed that she sent threatening messages to other female celebrities online. (https://pge.sx/3ff03FS)

“Kevin James Brings His Kingdom To Florida”
The star of The King of Queens has purchased a home on Florida's oceanfront. A native New Yorker, Kevin paid $18 million for the almost 12,000-square-foot oceanfront home in Delray with six bedrooms and a guest house. This is the second Delray home for Kevin, who sold a similar home in 2016 for $26.4 million. https://www.toptenrealestatedeals.com/

It takes 7½ months for a woman to feel completely comfortable around a man. And by comfortable, we mean comfortable enough to burp or go to the bathroom with her partner in the same room.

People living under pandemic lockdown measures have adapted as best they can, but six foreign tourists took an unusual approach by hiding out in a cave in India. The group lived in a cave near Rishikesh for nearly a month before they were found by the police and quarantined. The tourists — four men and two women from France, Turkey, Ukraine, the United States and Nepal — were initially staying at a hotel, but ran out of money and took refuge in the cave. They had been living in the cave since March 24 when police found them and moved them to a hotel to self-quarantine for two weeks.

A Japanese man found out the hard way that hell hath no fury like a woman scorned. When a woman found out her longtime boyfriend cheated she took all his beloved Apple gadgets and drowned them in a bathtub. Then, in order to drive the knife home, she took photos of what she had done and sent them to him.

As if shortages of hand sanitizer and toilet paper weren’t bad enough now there’s a shortage of frozen pizzas. Americans have bought approximately $275 million worth of frozen pizza since the start of the coronavirus pandemic in March. That’s an increase of 92 percent compared to the same time last year.

There is a museum of coat hangers (in Sweden).

Buckingham Palace has announced that Princess Beatrice is pregnant with her first child. (https://pge.sx/3u2CaFI)

A family dispute over custody of a pet turtle required police intervention this week. Cops were called Tuesday morning to an Ohio residence to deal with competing claims on an African Sideneck Turtle. Devin Staugh, 28, told deputies that he left the turtle with his parents when he went out of town for a few days with his girlfriend. Devin stated that he was there to retrieve the turtle and his parents were refusing to return the turtle to him. Staugh claimed he had “receipts for when he purchased the turtle” and also had “photos of him and the turtle on Instagram.” Staugh’s parents gave cops a different account of why they were caring for the turtle (who is not named in the sheriff’s report). “Both advised that their son had requested the couple keep his turtle as he was going to be incarcerated and unable to care for the turtle.” Staugh’s mother told cops that the turtle was in poor health when the couple began caring for the pet and “had to receive medical attention.” Additionally, cops noted, Staugh’s parents said that their son “was aware the couple was going to keep the turtle permanently.” The domestic dispute ended with the reptile remaining with Staugh’s parents. After Staugh’s mother declared that her son was not permitted at the residence, deputies “advised Devin he is no longer welcome on his parents’ property.” Staugh then “departed the area without incident.” And his turtle. (https://bit.ly/3oK5P5S)

A man who allegedly pursued a female hiker through the Sam Houston National Forest in the nude claims that he was only naked because he had to defecate. The man, identified as 53-year-old Scott Alexander Stephens, has been charged with disorderly conduct. If convicted, he could potentially be on the hook for a significant amount of money. The victim called the Montgomery County sheriff's office to report that a naked man was chasing her on Lone Star Hiking Trail's Trailhead No. 3 in Sam Houston. When deputies arrived to take the woman's statement, she told a patrol sergeant that she had seen the man emerge from a nearby stand of trees and begin to walk in her direction. She took off running, believing that the man was chasing her, though she admitted to the sergeant that she did not look back to confirm her suspicions. When detained and questioned, he admitted that he had stripped naked at one point to obey the call of nature. However, he said, he had not seen anyone else in the forest. Stephens was arrested in Montgomery County over the weekend and booked into the Montgomery County Jail. (https://bit.ly/3wmO1jO)

Off-Duty Hero Risks His Life To Save 4 Teens Caught In Rip Current
https://www.sunnyskyz.com/good-news/