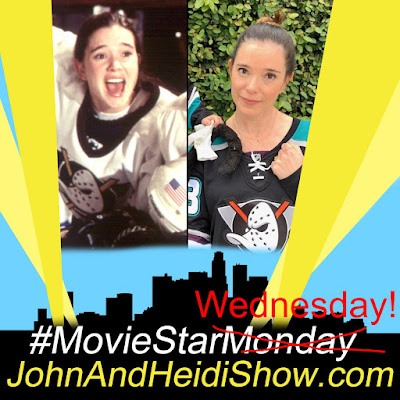 Today we visit with Marguerite Moreau (Mighty Ducks) about her new film Monuments a quirky indie dramedy out now on VOD and Digital.

SYNOPSIS: When Laura is killed in an accident, her estranged husband, Ted, wants to honor their time together by scattering her ashes where they first fell in love. But, he’s being chased by her family and the memory of the mistakes he made in life.

According to new research, the number of twins being born in the U.S. has increased by more than 70% over the past three decades. (https://bit.ly/3fs18du)

A study by the CDC found that sleeping in separate beds could have health benefits for most couples.(https://bit.ly/3jzzaxu)

A drunken Oregon motorist whose blood alcohol content was measured at more than NINE times the legal limit (apparently, a U.S. record) has been sentenced to 13 months in prison for his inebriated antics. Nathan Danzuka, 28, recently pleaded guilty to DUI, reckless driving, and fleeing charges in connection with a hit-and-run accident (and subsequent police chase) in February in Madras, a city 125 miles southeast of Portland. Danzuka was arrested after crashing his Ford Explorer into a concrete barrier. Police reported finding “several alcoholic beverage containers” inside the SUV. Danzuka was transported to a local hospital where a blood sample showed that his blood alcohol level was a staggering .778, more than NINE times the legal .08 limit. At time of his arrest, Danzuka was driving on a suspended license due to a prior drunk driving conviction. In addition to his 13-month prison term, Danzuka was sentenced to a year’s probation and had his driver’s license “suspended for life.” Previously, the highest blood alcohol contents reported was .72 by an Oregon woman in 2007, and .708 by a South Dakota woman in 2009. (https://bit.ly/3yFnBeJ)

Markie Post- the actress known for her roles in Night Court and Scrubs- has died at the age of 70. (https://pge.sx/3xrE9Fz)

Bill Gates told CNN that it was a mistake to meet Jeffrey Epstein. (https://bit.ly/3ytWTFw)

IKEA has released a candle scented like its iconic Swedish meatballs, bringing the classic smell from the store to your living room in honor of IKEA Family's tenth anniversary. (https://bit.ly/37iFd3E)

Spirit Airlines continues to cancel flights due to staffing issues and logistical challenges posed by the pandemic. (https://bit.ly/3fzNcOF)

The FBI is still investigating the citing of a man in a jet pack flying about Los Angeles. (https://fxn.ws/2TWBaXW)

A video has gone viral of a snoozing bison that caused a massive traffic jam at Yellowstone National Park. (https://bit.ly/3iw2DJp)

80 year old Rolling Stones Drummer Charlie Watts pulled out of the band's tour to undergo a medical procedure in London. A lot of people are shocked to hear the Stones are still touring at their age. (https://bit.ly/3Ckcvhi)

You can always "see" your nose. The human brain is capable of amazing things, but in order to do those things, it needs to block out distractions through a process called unconscious selective attention. The nose is one of those distractions. In his landmark 1960s study, Ulric Neisser discovered this phenomenon after he asked participants to count the number of times basketball players passed a ball in a video. What the large majority failed to notice in the video was a girl walking through the middle of the court with an umbrella, because they were so focused on counting.

The Tokyo Olympics were the lowest rated Olympics in history due to complications from Covid-19, and a shrinking interest due to ongoing protests of some athletes. Ratings have gone down 49% since the 2016 Rio games. (https://bit.ly/3iwetTZ)

Japanese officials are denying reports that the Olympic Games in Tokyo are contributing to the country's surge in Covid cases. (https://tmsnrt.rs/2VytpHW)

A Washington state man wearing a yellow dress was arrested after he stole a school bus and later drove a front-end loader construction vehicle through the home he shared with his estranged wife. Deputies were first alerted to the man, later identified as 39-year-old Andrew S. Loudon, Saturday night after employees of Osprey Rafting witnessed him driving off in the company’s privately owned large yellow bus. Responding deputies located the bus and spotted it run through a red light in Monitor. The driver refused to pull over when deputies tried to initiate a traffic stop. Deputies were forced to give up the chase due to Washington state’s new police reform laws that no longer allow law enforcement to pursue a fleeing vehicle unless there is probable cause that a serious felony occurred. On Sunday, the sheriff’s office was notified that the man believed to be the driver had been taken into custody in Chelewah. The suspect appeared to be wearing the same yellow dress. Loudon was charged with theft of a motor vehicle, possession of a stolen vehicle, first-degree malicious mischief/domestic violence and attempting to elude a police vehicle.(https://fxn.ws/3C4pV0S)

A Louisiana groom allegedly shot a friend on his wedding day because he thought the man was having an affair with his new wife. The St. John’s Parish Sheriff’s Office said that 30-year-old Devin Jose Jones and his bride were riding with the victim after the wedding on Saturday night when they hit traffic on I-10 in Louisiana. The two men started arguing in the car at around 11:00 p.m. Then Jones pulled out his firearm and chased the friend between cars along the highway, shooting and wounding him in the leg. Jones’ wife, meanwhile, stopped an ambulance and told personnel her husband was trying to kill her before barricading herself inside. Jones then tried to force his way inside the ambulance. Police caught up to Jones on foot, and arrested him. Charges against the shooter were pending Sunday. A bystander was also wounded in the hand after a bullet tore through the rear glass of their vehicle. The victims were airlifted to University Medical Center in New Orleans and are in stable condition. Authorities said the investigation is ongoing. (https://bit.ly/3rW9ora)

Woman Keeps Family Of Three From Drowning, Then A Human Chain Pulls Them All In
https://www.sunnyskyz.com/good-news