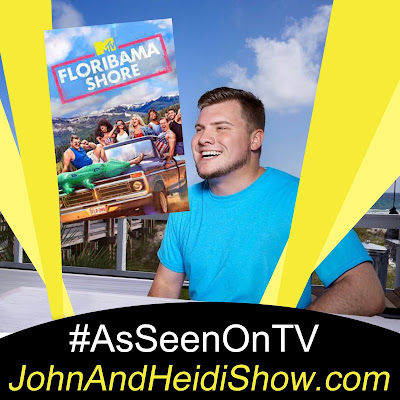 Today we visit with Cody Butts from MTV's Floribama Shore


A conversation starter: According to the ongoing surveys at PickTheWorst.com, which is worse…

A study found one in three people write down our passwords. The study also found that companies’ attempts to tighten computer security by regularly changing passwords and making them more complex by adding numbers as well as letters had no impact on security. Staff still had a tendency to jot down passwords either on a piece of paper or in a text file on a computer or mobile device.

A woman needed to be restrained by a fellow passenger on a Spirit Airlines flight to Nashville Saturday when she allegedly got drunk and attacked two flight attendants. Court records show that a 42-year-old woman was charged with public intoxication. The suspect yelled at arresting officers to “shoot me” and told them she had “a lot” to drink, according to The Tennessean. The woman allegedly punched one flight attendant and pulled another one’s hair during the 6:00 p.m. flight from Fort Lauderdale. A passenger restrained her feet with zip ties when the plane landed, and she resisted getting into a police cruiser at Nashville International Airport around 7:00 p.m. According to court records, the woman spent the night in jail but was released Sunday morning when her case was dismissed because the flight crew declined to press charges. The airline did not immediately respond to The Post about the incident or why the charges were dropped. (https://bit.ly/3I2gDW6)

A new book claims that Prince Harry lashed out at Prince William for doubting the sincerity of his romance with Meghan Markle. (https://pge.sx/3D1PfUu)

Jennifer Lopez has told friends she's "truly meant to be" with Ben Affleck after spending Thanksgiving together. (https://www.dailymail.co.uk/tvshowbiz/article-10249961/Jennifer-Lopez-feels-truly-meant-Ben-Affleck-spending-Thanksgiving-together.html)

A stowaway who hid in the wheels of an American Airlines Flight survived the three-hour flight from Guatemala to Miami. (https://bit.ly/3FYFKHz)

The South African Doctor who sounded the alarm on the Omicron Variant says the symptoms are "unusual but mild." (https://bit.ly/3nZD6ej)

A video of dozens of looters rampaging through two Minnesota Best Buys just days after the viral Flash Mob attacks in California has gone viral.(https://www.dailymail.co.uk/news/article-10250243/Group-30-looters-rampages-two-Minnesota-Best-Buys-flash-mob-robbers-California-craze.html)

A Russian Cannibal was arrested after a headless body fell out of his car during a car accident. (https://bit.ly/3nZDgSX)

Uber is getting into the marijuana delivery business. (https://cnb.cx/3d6JtWR)

A married couple was arrested on a plane in the Netherlands as they tried to flee the country after escaping from a quarantine hotel. The 30-year-old Spanish man and his 28-year-old Portuguese wife were collared “in an airplane that was about to depart” for Spain. One of them had tested positive for COVID, so they need to stay in The Netherlands. https://bit.ly/2ZEJNt6

A University professor is warning that a ring of garbage is forming around the earth. (https://bit.ly/3cYdsR5)

On a tip from a neighbor, police in Thailand raided a man’s apartment and found 13 barrels of what they thought were going to be illegal filled will illegal moonshine. One by one they cracked open the containers and found — hundreds and hundreds of women’s shoes. The man is apparently a collector and was allowed to keep his collection.

According to the Pinellas County Sheriff’s Office, a Clearwater man was arrested Thanksgiving morning after getting into an altercation with a pair of sisters over using gym equipment. An affidavit states that the sisters were using an exercise machine while the man, identified as 78-year-old Robert Edward Dvorak, was waiting for his turn. Authorities said the man then sat on one of the women to use the machine instead. When the other woman told Dvorak to get off her sister, Dvorak pushed the woman away. Deputies said Dvorak admitted to pushing the woman, and witnesses said he was the aggressor. He now faces a charge for simple battery. (https://bit.ly/3HX5rdg)

Police have arrested a man who is accused of shooting a woman in Manchester during an argument and then crashing into a police cruiser while fleeing after returning to the scene. On Thursday night around 9:00 p.m., a woman walked into the lobby of Manchester Police Department with a gunshot wound to her hand. The woman told officers that she sustained the injury during an argument with her son's dad inside of her home on Lilley Street. Emergency medical personnel treated the woman and she was transported to Hartford Hospital. Investigators checked the woman's home and said they determined the suspect, later identified as 63-year-old William Ramos Sr., had fled. Police said they found evidence of the shooting. While police were working to find Ramos, they said they learned he had returned to Lilley Street. At approximately 2:00 a.m., officers converged on the area and found a gray Subaru Outback, which police said matched the vehicle that Ramos was reported to be driving. Ramos' vehicle was parked near the location of the shooting and as officers approached the vehicle, they said he fled. In the process of fleeing, authorities said Ramos hit a parked vehicle and a police cruiser. Ramos is facing charges including home invasion, assault, burglary, threatening, reckless endangerment, criminal use of a firearm, criminal possession of a firearm and unlawful discharge of a firearm.(https://bit.ly/3pcqOyM)

I don’t know what your destiny will be, but one thing I know: The only ones among you who will be truly happy are those who have sought and found how to serve. - Albert Schweitzer