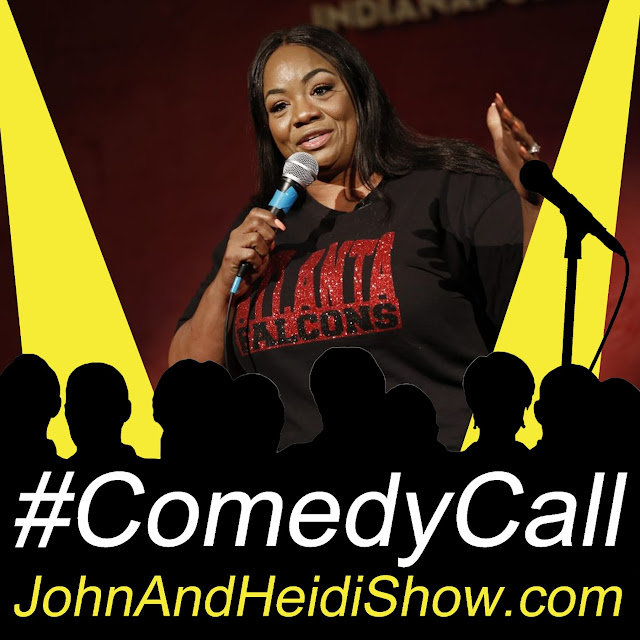 Today we have a #ComedyCall with Ms Pat. She has appeared on NBC’s “Last Comic Standing,” Comedy Central’s “This Is Not Happening,” Netflix’s “Larry Charles’ Dangerous World of Comedy,” TV Guide Network’s “Standup in Stilettos”, Nickelodeon’s “Mom’s Night Out,” and was just featured in the second season of the Netflix stand-up series “Degenerates.” In addition to the Ms Pat Show on BET+ and Paramount+.

We'll talk about her Netflix special... Ms Pat: Y'All Wanna Hear Something Crazy?… launched on Tuesday February 8th on Netflix.com

Y'all wanna hear something crazy? Then tune into Comedian Ms. Pat's first hour-long Netflix special, directed by the legendary Robert Townsend. Ms. Pat recalls growing up poor in Atlanta during the Reagan era, what she learned spending five days in juvenile detention, how her mom made her get baptized at local churches to get money, and much much more.

Nice pups finish last? A new study says that friendlier dogs “rank” lower than their more dominant pals in the dog hierarchy. A team at Eötvös Loránd University in Hungary found that, even if they live in the same loving home, friendliness conveyed a negative connection to dominance scores among dogs. The study of over 1,000 canines also found that age plays into this hierarchy. It turns out dogs respect their elders, as older dogs were found more likely to be dominant.

What’s your FAVORITE food to have lying in wait for you at the end of a long day? According to a poll of 2,000 people, surprisingly, it’s not pizza. Soups top the list of “good” leftovers, with 79% agreeing that it is a handy and delicious meal to enjoy a second time. Pizza came in second (63%), with meat (62%), pasta (60%), and rice (55%) rounding out the top 5. Just over half of respondents said Chinese food takeout and roasted potatoes are leftover-worthy foods. And 47% even think tuna and egg salads are good to save for later.

When it comes to robots, the future is female. A Washington State University researcher has found that people respond better to robots that have “female” characteristics rather than male ones. In a survey, participants reported being more comfortable interacting with female robots in a customer service setting like a hotel. Study author Soobin Seo says this is an increasingly relevant topic, as more and more businesses consider replacing human workers with automated services and artificial intelligence.

They announced the nominees for the 94th Annual Academy Awards. “The Power of the Dog” earned 12 nominations — including for real-life couple Kirsten Dunst and Jesse Plemons — who play husband and wife in the drama. “Dune”, the sci-fi epic starring Timothée Chalamet, earned 10 nods, while “Belfast” and “West Side Story” both got 7. And as producer of West Side Story, Steven Spielberg has set a new record, having now produced 11 films nominated for best picture. The Oscars will air live on ABC on March 27.

The new Kardashians reality series has a premiere date. Hulu has announced that the original series “The Kardashians” will make its debut Apr. 14. Hulu is the new home for the clan of reality stars, whose E! series “Keeping Up With the Kardashians,” wrapped in June 2021. New storylines will likely include Kim’s divorce from Kanye West (now known legally as “Ye”), Kourtney’s engagement to Travis Barker, Kylie’s pregnancy, the Astroworld tragedy and subsequent lawsuits against Kylie’s partner, Travis Scott.

It’s officially Girl Scout cookie season, and if you’re a fan (and who isn’t?), you’ve really got something to look forward to this year. The newest Girl Scout Cookie just dropped, and they’re called “Adventurefuls”. They’re described as an “indulgent brownie-inspired cookie with caramel-flavored crème and a hint of sea salt.” According to one lucky so-and-so who got his hands on an advance box, “The chocolate itself is reminiscent of any other chocolate-flavored Girl Scout Cookie, but the addition of the caramel crème and that subtle (but perfect) hint of salt make these one of the best Girl Scout Cookies I’ve ever tasted.” And even better, for 2022 Girl Scouts has partnered with DoorDash to launch “on-demand Girl Scout Cookie delivery”.

Scientists found that toddlers as young as 14 months make decisions of their own and do not simply copy their parents. For years, scientists and mothers accepted that infants learn by emulating the actions of their parents. But a team of people in Hungary concluded that babies will not always repeat irrational behavior and will instead carry out more obvious alternatives. In a simple experiment, a group of babies watched while a demonstrator switched on a light with her forehead. But, all the babies used their hands to switch on the light, deciding it was the simplest method.

Your hair grows faster in the morning than at any other time of day.

When you become really close to someone, you can hear their voice in your head when you read their texts.

Until around 1900, jump rope was primarily considered a boy’s game.

The “Big Dipper” is known as “The Casserole” in France.

Two trucks and a car were involved in a crash on a road in Germany. One of the trucks spilled its load of sauerkraut, which froze on contact with the road and blocked traffic. The woman driving the car was not seriously hurt.

Even vintage gaming platforms aren’t immune to Wordle’s cultural dominance, it seems. A security researcher who goes by the handle Stacksmashing has converted the hit word game from something you play in any browser to something you can now play on Game Boy. Stacksmashing says the 1989-era game machine’s limited memory prevented him from including the full Wordle word list, but he used a filter to help the console determine if you’re using one of the 8,000 most common English words.

A survey of 2,000 adults found 70% are looking to have more fun with their finances over the next decade, and here are the top-10 things that they want to spend more money on . . .

“When I’m in social situations, I always hold onto my glass. It makes me feel comfortable and secure and I don’t have to shake hands.”