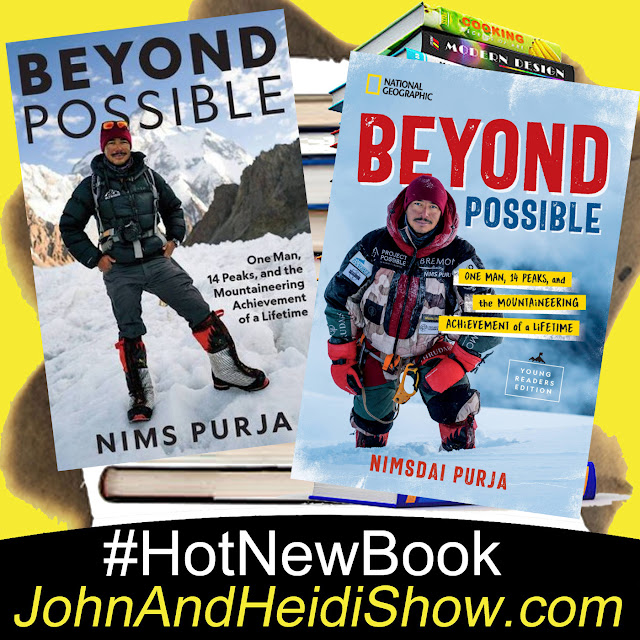 Today we visit with Nims Purja, the first man ever to summit all 14 of the world’s 8000-meter “Death Zone” peaks, Nims tells his story in Beyond Possible: One Man, 14 Peaks, and the Mountaineering Achievement of a Lifetime.
AVAILABLE NOW - https://amzn.to/3hdmprH

To bring Nims’ incredible story to the widest possible audience of readers, National Geographic will simultaneously launch Beyond Possible: Young Readers Edition at the same time as his adult memoir.
AVAILABLE NOW - https://amzn.to/3too8Aj

A simple eye test may reveal how long you have to live. An international team of medical researchers has discovered a link between the biological age of a person’s retinas and their risk of death. The study of about 47,000 adults, headed by the Centre for Eye Research Australia, found that people whose retinas were “older” than their actual age were more likely to die over the next decade. Each participant had their fundus (the back surface of the eye) scanned, and were monitored for 11 years. The team compared each retina’s “biological age” with that person’s chronological age, and discovered a “retinal age gap” in many participants. Large gaps were associated with 49-67% higher risks of death. According to the study authors, their findings “indicate that retinal age gap might be a potential biomarker of aging that is closely related to risk of mortality.” The discovery could lead to a routine screening tool for a host of life-threatening illnesses – including Alzheimer’s disease.

It’s common sense that someone who belongs to a gym may be in better shape than one who doesn’t. But just how much of a difference can ponying up for a club card really make? Research found that people who belong to a gym are 14 times more likely than nonmembers to meet the recommended weekly guidelines for both aerobic exercise and strength-training.

IKEA is making 3-D printed vegan meatballs. As you know, no trip to IKEA is complete without enjoying the company’s iconic Swedish meatballs. Now, as a way to invite prospective candidates to join their expanding tech team in Europe, the company is serving up the 3D-printed vegan meatballs during job interviews, as part of its newly-launched “Taste the Future” recruitment campaign. IKEA has committed to offer 50% plant-based meals in its restaurants by 2025 as part of its efforts to make health-conscious and sustainable options easy, desirable, and affordable.

The medic who rushed to help “Rust” cinematographer Halyna Hutchins after Hutchins was shot on set has filed a negligence lawsuit against several crew members and the film’s production entity, but notably NOT against Alec Baldwin. Cherlyn Schaefer was summoned to the Bonanza Creek Ranch near Santa Fe, N.M., on Oct. 21, after Hutchins and director Joel Souza were accidentally shot by Baldwin while preparing for a scene. In the suit, she alleges she has suffered “tremendous shock, trauma and severe emotional distress” as a result of Hutchins’ death, and has been medically unable to return to work. She’s the fourth crew member to file suit following the shooting.

The estates of Robin Williams and George Carlin say Pandora has been “willfully” streaming the late comedians’ recorded routines without proper licensing or even “a fraction of a penny” in compensation to the trailblazing comics’ heirs. In new copyright infringement suits filed Monday alongside complaints from fellow funnymen Andrew Dice Clay, Ron White and Bill Engvall, the estates claim the comedians’ works “continue to be exploited, performed, broadcast, and streamed” across Pandora’s platforms without proper permission and without any “substantive response” to warnings over the past few years. They ask for at least $4.1 million in damages for Williams’s estate and $8.4 million for Carlin’s estate.

A woman shared on social media a clever hack to catch a cheater, and it takes just seconds to set up. Aurie Louisse posted a video showing herself pulling down the passenger side visor mirror and opening it halfway. She then closed the visor. The trick means that if a woman gets into the passenger side and checks her make-up in the visor mirror, she’ll probably close it again when she’s finished — meaning the person who set up the trap will know when they check the car.

Wordle has definitely taken over the internet. And one of the keys to success in the game is a good starter – a word that contains the most common letters, or as many vowels as possible. With that in mind, here are some top opening words to help you win, according to the experts . . .

• Adieu: It knocks out 4 vowels at once, which is very handy, and by default, gives you an idea of if the fifth vowel is in there. (But it’s not English?)

• Soare: This old word for a young hawk was determined to be the best starting word by an engineer at Slack, who used data to discern the best strategy.

• Arose: A guy who hosts a Microsoft Excel YouTube tutorial channel determined that s, e, a, r, and o are the 5 most common letters, so he figures that a word using those 5 letters will work pretty well.

• Another tip: Never end a word with an “s.” There are no plural words in the possible solutions list.

The original name for the butterfly was “flutterby”.

Researchers believe that our skin gets wrinkly when soaked as the body’s biological way of gripping in slippery conditions.

85% of people tend to walk around in circles while talking on the phone.

It is not widely publicized, but Mr. Clean’s first name is “Veritably.”

Almost all varieties of breakfast cereals are made of grass.

A court in Sweden ruled a salesman who chipped a tooth on a cookie while visiting a customer was entitled to compensation for his dental work. The court ruled the injury was work-related because it occurred while he was on the job.

A Home Depot store is out $400,000 after an employee replaced cash with play money. Police say the store, in Tempe, AZ, discovered the fake money in December. It was purchased on Amazon where it is listed as “prop money” for use in videos and as party decorations. The employee, Adrian Pineda, was responsible for counting the cash in the store’s registers, and then putting it in a bag for bank deposit. Pineda was caught on surveillance cameras allegedly subbing out the real money for fake stuff over a period of almost 4 years. He admitted the plan to a manager, according to the complaint.

THE 10 WORST FOODS FOR YOUR HEALTH: (According to experts)

1. Bacon: Darn, I saw that coming. The World Health Organization has classified bacon in the same category as tobacco when it comes to carcinogens.

2. Turkey bacon: Sorry, you can’t go there either. It’s the processing that makes the meat harmful. So turkey bacon isn’t a healthier substitute.

3. Fried food: In general, fried food is higher in fat, salt, and calories, all of which are horrible for heart health.

4. Potato chips: They’re low in nutrition, and high in cheap fats and sodium.

5. Added sugars: If you see added sugars on the nutrition panel of packaged foods, steer clear. It has essentially zero nutritional value and increases risk of obesity and metabolic disease.

7. Hydrogenated fats: Common in packaged foods, they have been shown to increase mortality rates.

8. Refined carbs: These include white bread, white rice and pasta, pastries and pizza. Refined grain products promote inflammation, are generally higher in sugar and are largely stripped of fiber and nutrients.

10. Any other processed meats: Hot dogs, deli meats, packaged bologna, beef jerky, pepperoni and others should all be avoided or eliminated from your diet completely. They all contain chemicals that are not present in fresh meat, and are classified as group 1 carcinogens.

“As you get older, three things happen. The first is your memory goes, and I can’t remember the other two.” - Sir Norman Wisdom

Girl With Down Syndrome In North Macedonia Gets Bullied, President Walks Her To School https://www.sunnyskyz.com/good-news/